Youth Voices: Poems from the Fourth of July

As part of the IRC’s national Refugee Voices initiative, the IRC in Atlanta partnered with local Refugee Voice and IRC Youth Futures program alum, Nuam San, to plan and host an Open Mic night on the 4th of July, in partnership with Mayor Ted Terry and the City of Clarkston. 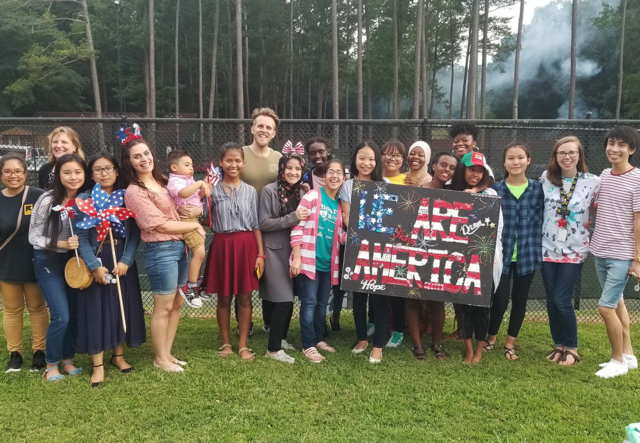 Nuam San delivered a storytelling workshop to students attending the IRC’s Ready, Set, College!summer camp and encouraged them to write their own poems and stories for the event [see some of these poems below!] As part of the workshop, students discussed their own journeys to America with each other, and found common themes such as their parents’ desires for them to have a good education. 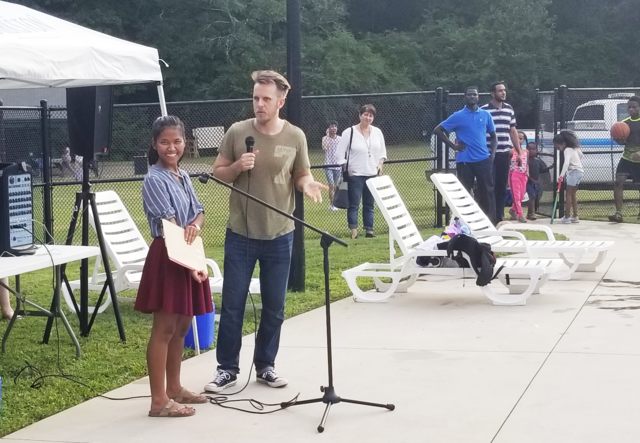 With Nuam San as the host, the students performed on July 4 in Clarkston’s Milam Park in front of more than 50 people! Other attendees also participated in the Open Mic, and shared their own families’ immigration stories. Many of our students overcame initial fears about performing and public speaking and were inspired by their peers to take the mic and speak out! They were also able to meet and speak with the Mayor and City Council and raise awareness of refugee resettlement amongst their American-born neighbors. The students also created a collaborative art project at the event—a large, mixed-medium canvas with the message “We Are America”—and many attendees joined in and added to the piece. 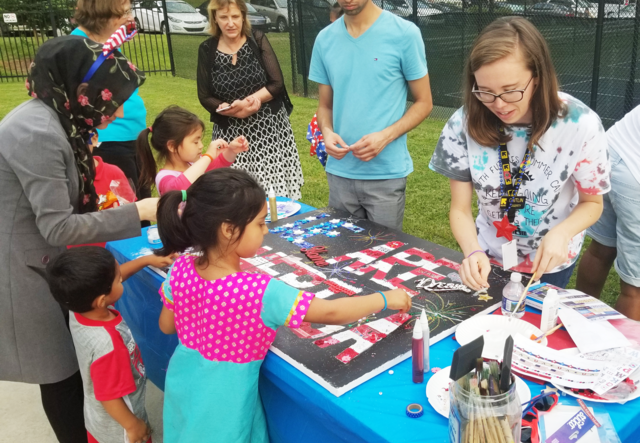 The collaborative art project was a bit hit with event attendees—especially the little ones!
Photo: IRC Atlanta

We are grateful to live, work and go to school in the welcoming community of Clarkston. We would like to thank Mayor Ted Terry and Clarkston City Council for inviting us to host our Refugee Voices Open Mic at the Clarkston July 4th Community Cookout and thank you to everyone who listened to our stories and shared your own.

Just because I’m from Asia

Doesn’t mean I am Chinese

Doesn’t mean I am smart

And doesn’t mean I know everything.

Just because I came to USA

Doesn’t mean I hate my country

Doesn’t mean I want to be separated from my people.

Just because I’m a refugee

Doesn’t mean I get free money all the time.

Does every Asian have to be smart?

Why assuming Asian to know math?

Aren’t the refugees the ones working at the worst job?

I am Asian but I am not Chinese,

I am not the smartest,

And I don’t know everything.

Don’t try to bring me down

Because I’m up next.

Just because I am a woman

Doesn’t mean I can’t do anything.

But I am deep and responsible.

Shyness doesn’t stop me from anything.

I can laugh until my stomach aches.

Promise myself to be brave.

Doesn’t mean that I have not been through hard times

And doesn’t mean you can take advantage of my kindness.

Just because I make a joke

Doesn’t mean that I made it to offend you.

Just because I am caring

Doesn’t mean you should take advantage of it.

Won’t you treat me the same way I do to you?

That’s all I ask of you.

To learn more about the work of the IRC in Atlanta and for information on how you can get involved with the IRC as a donor or volunteer, please contact Senior Development Manager, Kalie Lasiter, at [email protected] or 678-636-8941.