After fleeing his home, a Syrian boy finds joy in music and art

“When we arrived at the camp, I noticed a change in Yasser—he wasn’t playing or interacting with other children,” recalls Jumana,* 47-year-old mother of 11 children. “He stopped laughing and singing, and I thought he was depressed.” 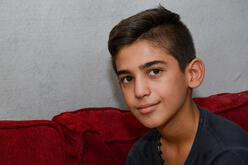 Thirteen-year-old Yasser and his family fled their hometown in northeast Syria due to the conflict.
Photo: Photo: Nada Bader/IRC

Yasser was just 7 years old when the decade-long conflict in Syria forced his family to flee their home in Ras el Ein. They would eventually find themselves in a camp for people displaced in northeast Syria.

Life in the camp is difficult. Families lack proper shelter to shield them from Syria’s cold and wet winters. During the summers, they are exposed to heat intensified by climate change. Basic necessities are hard to come by.

Recently, Jumana enrolled Yasser, now 13, in the International Rescue Committee’s psychosocial support programme, intended to help children in the camp cope with stress and turbulent emotions. The boy rediscovered his love for art and for playing the buzuq, a string instrument similar to a lute.

Below, mother and son describe their life in the camp and how Yasser has come to feel “like a new person.”

Jumana: Before the conflict, we lived safely and comfortably. My husband was a taxi driver and he was the sole provider for the family.

We left Ras el Ein because of the airstrikes—I was worried about my children’s safety. I had a heart condition, so first we went to Damascus, where I could get treatment. We had to leave after three months because we couldn’t continue staying in other people’s houses. We ended up at the camp.

For the first week here, we had to sleep on the wet floor. It was winter and I would wrap the children in a big blanket so they wouldn’t get wet. That was before an organisation brought us mattresses and blankets. 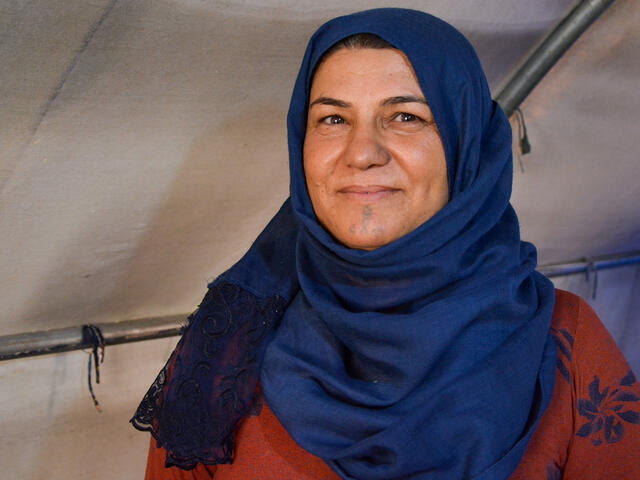 Jumana was very worried when her thirteen-year-old son Yasser went through a period of depression after the family was displaced and she searched for organisations that could help him.
Photo: Nada Bader/IRC

Yasser: My biggest fear is that we won’t ever be able to go back to Ras el Ein. Every single person in the world loves their hometown. When we had to flee, I cried; I didn’t want to leave. I miss everything about it.

Life in the camp

Yasser: We often don’t have electricity or water. When I first arrived here, I wasn’t able to go to any kind of school. I was such a sad person—it wasn’t a nice feeling. 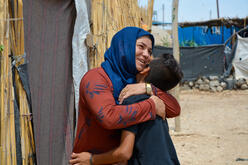 Yasser with his mother outside the family's tent in a camp for displaced people in northeast Syria.
Photo: Photo: Nada Bader/IRC

Jumana: Yasser was a happy child before the conflict. He wasn’t lacking in anything. He would go to the park or the pool with his father. Here there’s nothing like a park or pool and he has no friends.

One day when we were in the market, he said that everyone there was just pretending to be happy. I told him, “Look, life goes on. They have shops and they are selling and buying. Life has to continue, it doesn’t stop for anyone.” He said “Really?” as if he didn’t believe me. I noticed his situation deteriorating with time.

Jumana: In Ras el Ein, I enrolled Yasser in the cultural centre because he loved music, dancing and acting. He used to perform plays on his own at home. That’s also where he started to love the buzuq. 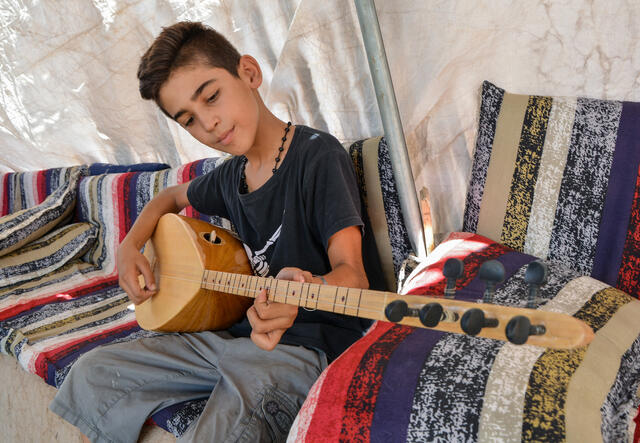 Yasser plays his buzuq in his family's tent in a displacement camp in northeast Syria.

Yasser: I started playing the buzuq when I was 7 years old. I was enrolled in music and art classes, and when I saw my friends playing it they inspired me to learn as well.

When we left Ras el Ein, I stopped playing. But two months ago, an organisation bought a new buzuq for me and now I’m playing it again. I’m so thankful to them.

Jumana: I went to a local charity organisation and registered him there. I told them my son was sad all the time and about how he loves music and really wants a buzuq.

Jumana: We then enrolled Yasser in the IRC’s psychosocial support activities in the camp. He started playing and painting and we started to notice an improvement in him. Now, whenever I see him playing the buzuq and he’s happy, I feel happy too. His happiness is my happiness. 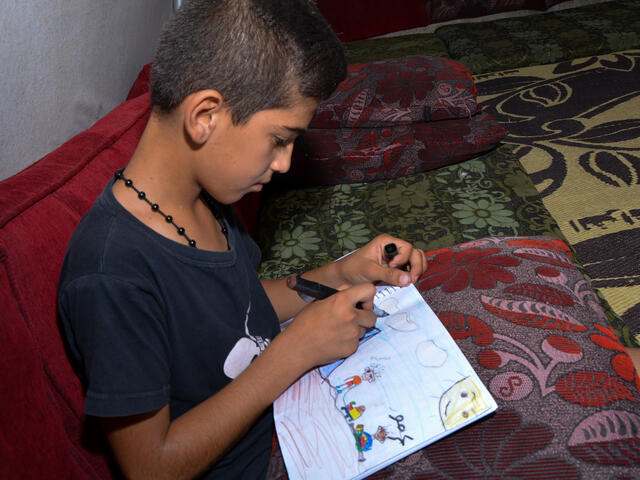 Yasser enjoys all types of art and would like to be an artist someday.

Yasser: Back home, I had many friends and we used to play music together. But I haven’t seen any of them since we left and I miss them so much. There’s nothing I wish for more than to return home and play music again with my friends.

Looking to the future

Jumana: My husband is 60 years old and works as a laborer. I bought a sewing machine to try and earn an income.

The IRC provided Yasser with psychosocial support and counselling sessions which helped him to overcome his depression.
Photo: Nada Bader/IRC

I don’t want my children to suffer like I did. I try to secure everything I possibly can for them. If Yasser likes music and art, I would like to see him be an artist. I hope he’s able to do the things I couldn’t do. I love music, life and joy, all the beautiful things in life. I love my children more than anything else.

Yasser: I would like to see Syrian children able to live like all the other children in the world. I’d like to return to my town and live in our house comfortably again and go back to school. I miss my friends and my neighborhood and everything about home. 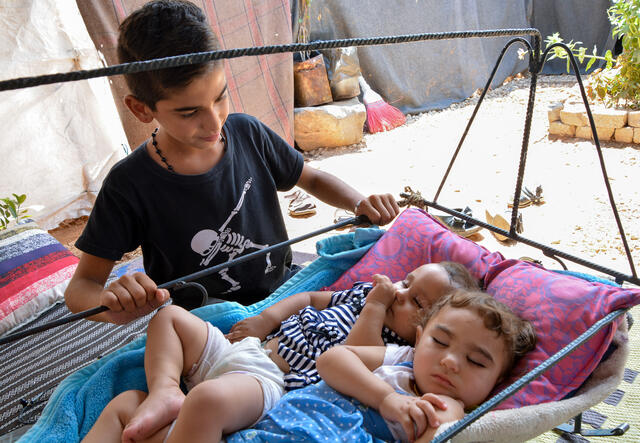 Yasser rocks his sister's daughters in their cradle in their tent in a displacement camp in northeast Syria.
Photo: Nada Bader/IRC

How the IRC helps in Syria

The IRC is the only international humanitarian organisation in northeast Syria providing specialised mental health services and emotional support, offering a range of psychological and psychiatric services via a team of 17 health professionals—including two travelling psychiatrists.

In 2020, the IRC and its partner organisations provided more than 900,000 Syrians with health care; support to women and girls; child protection and informal education; and economic well being programmes such as cash support and job training. Included in this number are 123,000 children like Yasser who were provided with safe spaces to play and learn, as well as access to psychosocial support to help them overcome distress and deal with their emotions.