Newly engaged and working amidst conflict and crisis at home, Ukrainian refugee Anastasiia tries to rebuild her life. 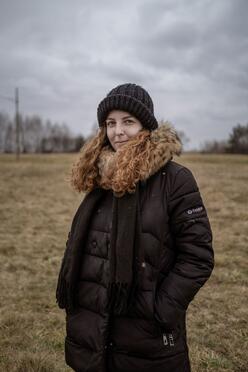 Anastasiia fled to Poland with her mother and brother. Most of her family is still in Ukraine.
Photo: Francesco Pistilli for the IRC

In the space of a month, Anastasiia’s world turned upside down. Separated from her friends, her homeland and most of her relatives, she is living in Poland with her mother and brother. Below, she speaks to us about navigating through work, family and relationships while adapting to ever-changing circumstances.

How did you first decide to leave Ukraine?

I had been living in Lviv, in western Ukraine, for 6, almost 7 years, although I’m originally from Zaporizhia, in the southeast, and that is where my family is from. For the last six months, I have worked for a company that has all foreign clients.

On the day the war began, my mother texted me at 6am, and said that they were leaving to come to me. Reading all of the news, I started crying and screaming, I couldn’t believe what was happening. Then I saw another message from my mother later that day. They were on their way to pick me up in Lviv. I felt relieved that I would get to see them soon. It took about a day and a half for my family to arrive.

What helped you cope with so much change?

I was trying to work and not read the news all the time. I took maybe two or three days off work, but otherwise I worked throughout, everyday. My job is in marketing and I work remotely. It helped to distract me from what was going on.

At the same time, I was trying to find us an apartment in Poland. This was another distraction. When my parents got to me in Lviv, we initially thought we would stay there, and we were also considering going to Zaporizhia because my grandparents were still living there. There were many things to consider, including my boyfriend’s hopes that we would move abroad together. We chose Wrocław in Poland because my parents have friends there, and they let us stay in an apartment while we looked for somewhere longer term. Much of the rest of my family are still in Ukraine.

More than 3 million people came to Poland, just like us.

More than 3 million people came to Poland, just like us. It was so hard to find somewhere good for my mother, brother and me. We were lucky in the end, though, because we got an apartment quick enough, thanks to the help of our friends. Right now, it’s good for us. We don’t argue at all, and I can work online every day. Similar to most Ukrainians here, my mother is struggling to find a job in Poland. 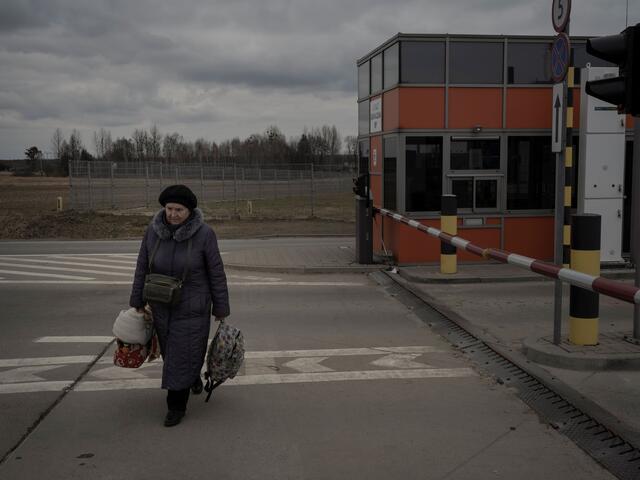 Your boyfriend lives in another country in Europe. Has that been difficult?

The first thing my boyfriend wanted to do was take me away to where he lives. But that was hard for me; after days of discussing it with my family, we decided to go to Poland and I managed to see him at the Ukraine-Polish border, as he came to volunteer with a friend.

He’s finishing his education, and he’s also volunteering as an interpreter to help refugees who have fled Ukraine. It’s difficult for him too; he also has family in Ukraine. But I’m glad he is safe, and we talk everyday. At this time, I have no idea when we will next see each other, but I hope he will manage to get tickets to come here as soon as possible.

Something really good happened to you soon after you arrived in Poland. Can you tell us what happened?

My boyfriend proposed to me last month. It happened on 7 March, the day before International Women’s Day. It was so unexpected. I remember being very cold, tired and wanting to go home, but my boyfriend wanted us to keep walking, even though it was late. We were walking around the city, just holding hands and talking.

All of a sudden he stopped and said “look at me”, and then he told me he had something to say to me. He got down on one knee and asked me if I wanted to be his wife. I was so shocked! It took me a few minutes to realise this was really happening, and then I told him my answer was of course yes.

So, now he’s my fiance! Getting engaged that evening was the first positive day I have had since everything began.

What do you hope people understand about the situation in Ukraine?

It’s been so horrible, reading the news and wondering where family members are. All my relatives are in eastern Ukraine, and I am afraid of what could happen to them. Like my fiance’s grandmother and his other relatives; they are very close to the Russian border. Nobody knows what will happen tomorrow. It’s the worst thing. There’s so much information to get through, even in just one hour. And we’re constantly, always, reading the news and hoping people are okay. 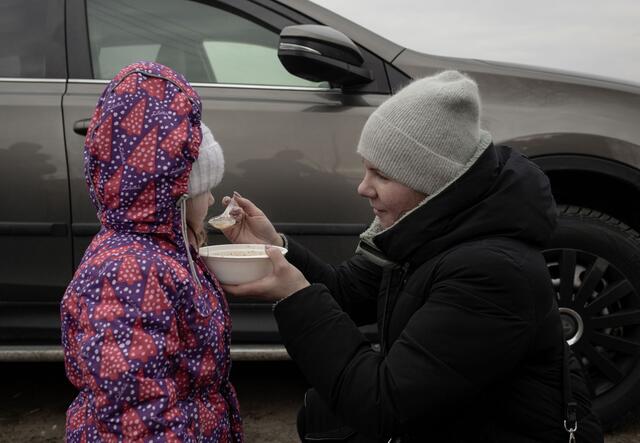 A mother and daughter who were forced to flee Ukraine. Men of military age are not allowed to leave Ukraine, which means that many women and children forced to flee the country are travelling alone.
Photo: Francesco Pistilli/IRC

Your brother is a teenager. How has he adjusted to all of this at such a young age?

At first, when we were leaving and on the way to Poland, he thought we were going on holiday; he said he’d never been to Poland before!

My brother is now enrolled in a local school and he’s really happy and enjoying it. We thought a school specifically for Ukrainian refugee children would be better for him, but after a week there he told us he preferred the Polish school he first went to as he made friends there. He just started talking to his new classmates—many were Polish, some were from Belarus or Russia—and he made friends easily.

I hope we don’t stay here very long. But right now it seems like we won’t return soon.

What do you hope for in the future?

I hope we don’t stay here very long. But right now it seems like we won’t return soon. It’s hard to predict. I don’t know how long we will be here for.

I’d like to live in another part of Europe with my fiance, but not for the rest of my life. I have a dream to go back home and live in Ukraine.  I hope I get the chance to do that with him some day.

In Ukraine, we are supporting evacuation efforts for women and children, providing psychological care and delivering groceries, blankets, warm clothes, stoves, cash and other essentials to displaced families. 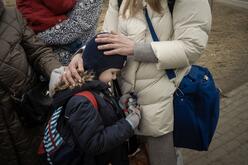 The IRC is also on the ground in Poland working with three local organisations to meet the needs of families displaced from Ukraine, many of whom are staying in shelters across the country. Working with partners allows us to bolster the crisis response of people who have already been active in the community and are experts on the local context.