Born under ISIS, the children struggling in Iraq

In many ways Yakeen is like any toddler. She’s approaching her second birthday. Her cheeks flushed a rosy red by the winter chill, she clings to her mother’s long skirt.

But unlike most two year olds she has spent most of her life living under ISIS in west Mosul, along with her two sisters, Rama, 3 and Hiba, 4. The girls’ early years were vastly different from how their parents had imagined.

ISIS dictated every aspect of life for this family and for the 1.5 million people who endured three years of its harsh rule in the northern Iraqi city. Yakeen’s father, Sadoun, wasn’t able to work and the family survived off the little he made selling water in the street. They spent almost all of their time at home, afraid to leave.

When the battle to rid Mosul of ISIS drew near their home in the Old City, they fled across the Tigris river to the east with little more than the clothes on their backs. Like thousands of others, their house was destroyed in the fighting. 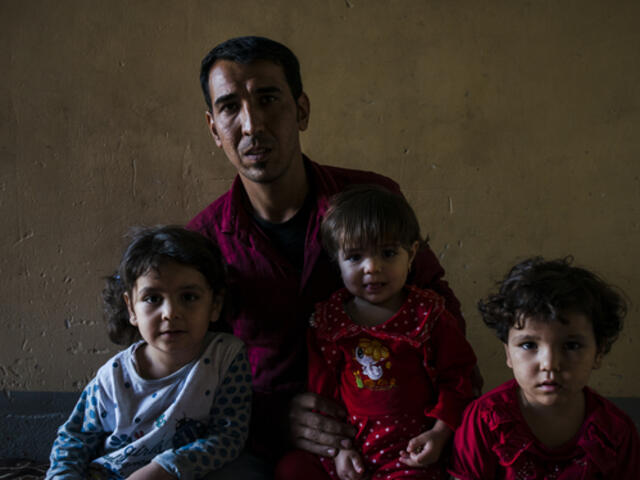 Sadoun with his three young children at their cramped house in east Mosul where they live with their grandparents, aunts, uncles and cousins.
Photo: Alex Potter/IRC

“Under ISIS everyone was sick. There wasn’t enough medical care,” recalls 31-year-old Sadoun.

When Yakeen was born her mother, Huda, had to have a caesarean operation: “It was very difficult—I was so scared,” Huda says. “There were no medicines or drugs to help me, and we had to pay a lot even for just basic care.” Luckily, Yakeen arrived safely.

For Yakeen, this meant that she was unable to access check-ups or other medical care after ISIS was pushed out of Mosul.

Today the thousands of documents that were issued by ISIS are no longer recognized. Along with birth certificates, ISIS issued marriage certificates, death certificates and the other vital identification documents needed to access basic, essential services such as education and pensions, and to move through checkpoints.

Having these documents is vital for Mosul’s residents to restart and rebuild their lives, but it is estimated that half of all displaced Iraqis have had some documentation lost or stolen, or invalidated because it was issued by ISIS.

Under ISIS everyone was sick. There wasn’t enough medical care.

Getting new documents is complicated, and—unable to afford legal support—many people have trouble navigating the process alone. That’s why the International Rescue Committee’s legal team is working with thousands of families like Yakeen’s across Iraq to help them to get the new documents they need.

“The IRC team went with us to the department that issues certificates, which is in a hospital, and finally we managed to get the new papers.” Sadoun says. “With the birth certificates our kids can get food rations and medical care.”

“After months of waiting the kids finally got their vaccinations which they missed out on under ISIS,” he explains. “When we got the certificates, it felt great. They help to ensure the rights of the children.”

“When people first hear ‘humanitarian aid’ they might think about organisations handing out food or tents,” says Wendy Taeuber, the IRC’s Iraq country director. “However, for those who have been displaced from their homes for months, or even years, there is a good chance people will have lost essential documentation needed to access welfare, health care, to travel freely, and even send children to school.” 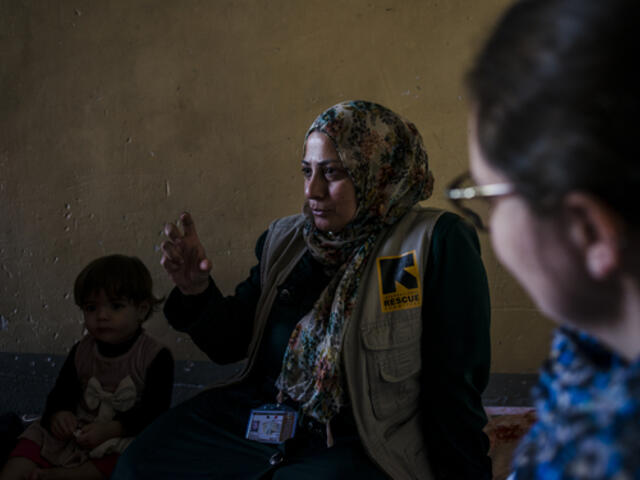 The IRC's legal team is working with thousands of families like Yakeen’s across Iraq to help them obtain vital identification documents.
Photo: Alex Potter/IRC

The house Yakeen’s family lives in in east Mosul with her grandparents, aunts, uncles and cousins, is cramped and falling into disrepair in places.

“I have no money. My neighbors here gave me everything that we have,” says Sadoun. “They gave me these mattresses to sit and sleep on. Between the three families we pay 115,000 Iraqi Dinar (£70) a month for the rent. We don’t have any electricity or running water.”

There is glass missing from the windows. Without adequate heating the young girls will suffer during the winter.

Unable to afford to rebuild their destroyed home, the family is hoping to put down roots in east Mosul. “I hope we stay here for a long time because we don’t have a house to go back to,” says Sadoun.

Today the family is doing their best to give their children what they need. In the doorway of one of the rooms there is a swing which the cousins line up to take their turn. One step at a time, Sadoun and Huda are working to give Yakeen and her sisters the happy childhood they deserve.