Claiming asylum in the UK – the facts

People arriving in the UK have the right to claim asylum - however, the process is complex and the law around asylum seekers changes regularly. Below, we’ll cover what it means to be an asylum seeker and how claiming asylum in the UK works – including the latest changes from the Nationality and Borders Act that came into effect earlier this year.

If you would like more information on the legal definition of a refugee, you can read more here.

Asylum seeker, refugee, immigrant… the terminology that labels people migrating from one country to another can be confusing, and at times, divisive.

The terms asylum seeker and refugee refer to people at different stages of their journeys to safety. All asylum seekers are potential refugees. They are people fleeing from dangerous circumstances in their country of origin, and looking to claim international protection.

Everyone has the right to seek asylum in any country they choose. They must apply for protection in the new country, and the country will then assess whether they meet the criteria of a refugee. There are many reasons asylum seekers choose to apply for asylum in a specific country, from familial ties to the fact that they may already speak the language.

Those who do are granted official refugee status and are given protection (asylum) under international laws and conventions.

Under the UN Refugee Convention, of which the UK is a signatory, allows for choice in where individuals apply for asylum. They do not have to apply for asylum in the first “safe” place they reach.

What are the rules for seeking asylum in the UK?

To be eligible in the UK, an asylum seeker must have left their country and be unable to return. The process begins with a screening by an immigration officer who registers the claim. After this, the Home Office will make a decision on whether it will consider the case.

How can asylum seekers apply for protection from outside the UK?

There is no safe way to apply for asylum from outside of the UK. That’s why organisations like IRC keep calling for more safe and legal routes, including coordinating with European partners on offering protection to people seeking safety within Europe.

Providing safe routes for refugees means offering protection and safe ways of reaching the UK so that refugees don’t have to resort to dangerous journeys. Family reunion and resettlement schemes are two routes to the UK that would qualify as safe and legal routes.

Resettlement schemes offer protection for the most vulnerable refugees who are usually located in countries neighbouring crisis areas, having fled conflict or persecution at home.  Unfortunately, even places under these routes are extremely limited. For instance, in 2021, the UK resettled approximately 1600 refugees - far fewer than we have the capacity to take. It is important to remember that the vast majority of the world’s 27 million refugees are hosted in countries neighbouring crisis areas.

In addition, many of these schemes are circumstance - or location-specific.

For example, following the crisis in Afghanistan in August 2021, the UK government formally opened the Afghan Citizens Resettlement Scheme (ACRS) in January 2022. The government has said that it will resettle more than 5,000 people in the first year and up to 20,000 over the coming years.

However, charities and politicians from all parties have highlighted that the ACRS will need to deliver more places, more quickly, to offer protection to Afghans that supported the UK effort and are at most risk of persecution.

While there are a handful of safe routes, the UK Government needs to significantly improve and expand them in order to help people seeking asylum. Our article examining the new Nationality and Borders Act suggests several ways these so-called safe routes could be reformed or work more effectively.

How does the recent Nationality and Borders Act change things?

The recent Nationality and Borders Act has brought in new laws that undermine an individual’s right to seek asylum in the first place.

The new law categorises refugees into two groups, based on how they arrive in the UK. These groups will receive different access to rights and protection. People arriving through so-called ‘illegal routes’, such as on small boats, may not be able to apply for asylum in the UK at all or only receive temporary protection.

UNHCR has said that some provisions of this new Act are in breach of the Refugee Convention which sets out the rights of refugees and allows people to  seek asylum where they choose. ‘The UK is a nation that rightly prides itself on its long history of welcoming and protecting refugees,’ it says. ‘It is disappointing that it would choose a course of action aimed at deterring the seeking of asylum by relegating most refugees to a new, lesser status with few rights and a constant threat of removal.’

The IRC believes that no one should lose their right to apply for asylum by trying to access safety. Read more about the IRC’s analysis of the Nationality and Borders Act and the changes we’re calling for.

How long can you be an asylum seeker in the UK?

The Home Office says ‘claims ​​will usually be decided within 6 months’ but that ‘it may take longer if it’s complicated’. Freedom of Information requests made by the Refugee Council last year found that, on average, it takes one to three years to get an initial decision on an asylum case – some cases take longer than five years.

This doesn’t include the time people seeking asylum must wait before making an initial application, or the appeals process, which makes the wait times even longer.

When we look at the total number of cases in the asylum system (including initial decisions, cases awaiting appeal, and failed cases), there are 125,316 ‘work in progress’ cases (Home Office).

With 75% of cases ending in grants of protection, this means vulnerable people are being made to wait years in limbo before they can begin the next chapter of their lives in safety.

This has several knock-on effects:

It is essential that the UK government invests in and resources the asylum system, so that claims can be processed more quickly and provide certainty and protection to people seeking safety.

Asylum seekers cannot work while waiting on the outcome of their case.

The IRC is part of the Lift the Ban campaign to raise awareness of why this ban on asylum seekers working is so harmful to everyone involved. It takes the toughest toll on people seeking asylum, but estimates suggest that the UK economy will also have lost almost GBP 1 billion over the past decade by the end of 2022.

In certain cases, the UK Government’s Immigration Rules allow asylum seekers who have been waiting for a decision for longer than 12 months (through no fault of their own) to request permission to work. However, they are only allowed to apply for a narrow band of jobs on the Shortage Occupation List. This doesn’t go far enough.

Campaigns like Lift the Ban highlight the importance of giving all people seeking asylum the right to work so they can use their skills and live in dignity. The Lift the Ban coalition estimates that preventing people
seeking asylum from working costs the taxpayer more than £300 million a year.

What benefits do people seeking asylum get?

Without the right to work, most people seeking asylum must rely on help from the UK government while they are waiting for the outcome of their application. Asylum support starts from the day of the screening and gives people somewhere to live and a small allowance for necessities.

Housing support provides basic accommodation and asylum seekers cannot choose where in the country they will live.

The weekly allowance for food, clothing, and toiletries equates to just £5.84 per day. There is some extra funding available for pregnant women and mothers with babies and very young children. Children aged 5-17 can attend free state school.

It’s important to note that asylum support was only ever intended to be a short-term fix while claims were being processed. But, as highlighted above – the wait is often years longer than it should be.

Where do most asylum seekers come from?

In 2021, the UK received 55,146 asylum applications (relating to 65,008 people). The most recent data from the Home Office shows the top five countries seeking asylum were:

Iran has been the top nationality claiming asylum in the UK since 2016.

The UK is home to just 1% of the 27.1 million refugees who have been forcibly displaced worldwide. 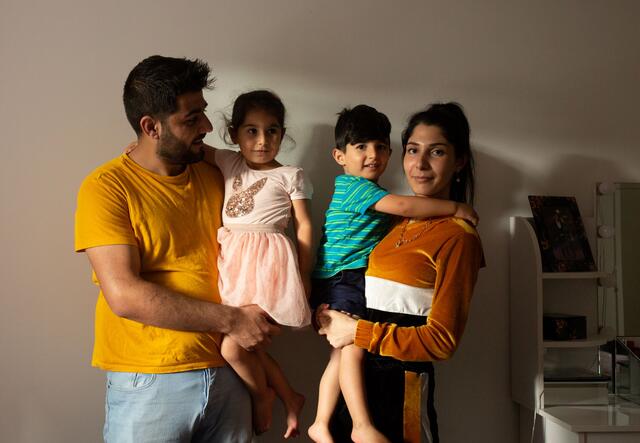 Kurdish-Syrian refugee Maasom, who now lives with his family in the UK, joined the IRC’s RISE programme, which supports resettled refugees to integrate into their new communities in the South East of England.
Photo: Elena Heatherwick/IRC

How can I help asylum seekers and refugees?

The International Rescue Committee (IRC) helps people whose lives have been shattered by conflict and disaster to survive, recover and rebuild.
Today, we work in over 40 crisis-affected countries and work with resettled refugees in the U.S., Europe and the UK. Find out more about the IRC’s work in the UK here.