Five places bearing the brunt of the climate crisis

From intense flooding in Pakistan to chronic droughts in East Africa, the world is experiencing an increasing number of climate-related disasters. These catastrophes trigger mass displacement, hunger and the disruption of public services. They are also concentrated in the countries that have contributed least to climate change–often with little support from those responsible for most carbon emissions.

The 20 countries that account for 90 percent of humanitarian needs globally were responsible for just over 5 percent of carbon emissions in 2018. These countries lack the capacity to respond to worsening climate conditions yet are affected disproportionately.

Go inside five places bearing the burden of the world’s climate emergency.

Somalia: famine at the door

A U.N. announcement that “famine is at the door” in Somalia is indicative of the climate catastrophe that the East Africa region has been facing. Somalia is entering its fifth consecutive season without adequate rainfall. The consequence? An intense drought moving the country toward the brink of famine.

The effect of drought on Somalian farmers and the country’s food supply is devastating. Lack of rainfall has destroyed crops and killed livestock, doubling malnutrition rates since the beginning of 2022. The climate-induced drought in Somalia has displaced millions and increased the need for life-saving humanitarian aid.

Millions of Somalis may be at risk of famine in the coming months if world leaders do not adequately fund the humanitarian operations desperately needed in the country. But Somalia is not the only country in the region dealing with increasingly severe climate disasters.

Neighbouring Kenya and Ethiopia also are experiencing climate-induced crises. In Kenya, droughts have killed millions of livestock and ravaged agricultural production; as a result, 3.5 million people are now severely food insecure. Meanwhile, the government of Ethiopia has announced a national state of emergency.

Asha tends to an animal from her family’s herd. “If this severe drought persists, none of us will survive," says her grandmother, Hawo. "The drought will sweep both the animals and the people. Droughts are not new to me but to my experience, this is the worst I have ever seen."
Photo: Horn Connect for the IRC

Collectively, Somalia, Ethiopia and Kenya are home to 2.35 percent of the world’s population but emit just 0.1 percent of total global CO2 emissions (all emissions levels taken from the Emissions Database for Global Atmospheric Research, EDGAR). Millions of families who live in East Africa will continue to be plagued by climate-induced catastrophes unless urgent climate action is taken.

Pakistan is one of the world’s most climate-vulnerable countries. Today, there is no better example of a nation bearing the brunt of the effects of climate change. Floods have submerged one-third of the country, an area equal in size to the United Kingdom.

Pakistan’s floods have disrupted the lives of 33 million people, more than the population of Texas. The waters have killed over 1,400, and destroyed 3.6 million acres of crops. These numbers could rise as more heavy rain is expected during the country’s monsoon season.

Pakistan bears little responsibility for the growing climate crisis. Although 2.68 percent of the world’s population calls Pakistan home, the country is responsible for just 0.6 percent of global CO2 emissions.

Faisal* sits in the remnants of his home, which was destroyed by flooding. The climate-induced disaster has left Faisal and his family without shelter.
Photo: Saima Javaid for the IRC

In Afghanistan, political instability and conflict have exacerbated the effects of climate change felt across the country. Afghanistan has been facing its worst drought in 27 years—making farming more difficult and reducing available food supplies.

Some regions of Afghanistan are also experiencing intensive flooding alongside neighbouring Pakistan. While at first glance droughts and floods may seem unrelated, these two climate catastrophes are intrinsically linked. When areas suffering from drought are suddenly hit with a large amount of rainfall, the ground cannot adequately absorb the water. This result is a flash flood.

Afghanistan experienced a deadly flash flood in April 2019 and in August 2022 heavy rainfall caused flash flooding across several provinces that killed over 180 people.

This cycle of droughts and flash flooding is likely to continue in Afghanistan. As one of the countries most in need of humanitarian aid, Afghanistan lacks the resources to respond to climate-induced disasters. And like the other nations listed here, the country has contributed very little to the world’s changing climate. Afghanistan is home to 0.49 percent of the world’s population but emits only 0.03 percent of global CO2. 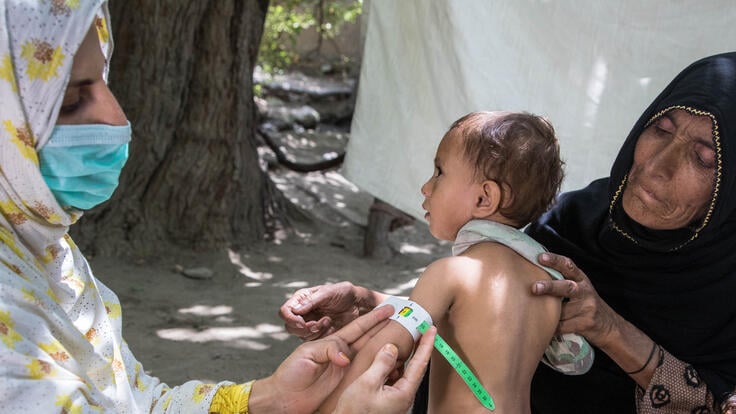 Riaz Bibi takes her grandson, Mazhda, to be assessed for signs of malnutrition. Climate crises in Afghanistan have reduced food supplies and contributed to rising cases child malnutrition.
Photo: Oriane Zerah for the IRC and ECHO

In 2020, the most active Atlantic hurricane season on record displaced nearly one million Hondurans, almost 10 percent of the country’s population. Prolonged droughts have also disrupted farming and agricultural production, leading to high levels of food insecurity.

In 2020, over 50 percent of the country’s population could not afford a healthy diet. By 2021, 3.3 million Hondurans were facing crisis levels of food insecurity.

The reverberations of economic disruption caused by climate change can be complex. Take, for example, the experience of small-business owner Aracely, 50, who oversaw the harvesting of coffee beans at a field in her community. When hurricanes Eta and Iota hit, the town lost its primary source of income.

That would be difficult in itself, but in Honduras, lack of cash can have grave consequences. Nonstate armed groups hold a great deal of power in the country and often demand extortion fees from local businesses—threatening violence when business owners do not pay up. When Aracely could no longer afford these fees after the hurricane, she was forced to flee her home.

Aracely, 50, stands alongside an IRC staff member after receiving financial education training from the IRC’s Economic Recovery and Development team. She says, “A better life for me means having a job, being okay and happy—not being afraid."
Photo: Andrés Brenner for the IRC

“Extortion means that, when you have a business, they [non-state armed groups] impose a fee and, if you don't pay it, they threaten you,” Aracely explained to the IRC. “They say they will kill you or your family, so that's why people end up leaving the country. We have no choice."

Although Hondurans suffer significantly from the fallout of climate change, they contribute little to the root causes of this global problem. Honduras is home to 0.12 percent of the world’s population but is responsible for only 0.03 percent of global CO2 emissions.

Africa’s Sahel region spans 10 countries and is home to 135 million inhabitants—equivalent to 40 percent of the entire population of the United States. The countries making up the Sahel region—Burkina Faso, Chad, Eritrea, The Gambia, Guinea-Bissau, Mali, Mauritania, Niger, Senegal and Sudan—share one thing in common: they are all disproportionately affected by climate change.

Climate change is causing temperatures in the Sahel to rise 1.5 times faster than the global average. The resulting cycle of drought and flood is increasing the rate of desertification. More than 30 million people are now in need of emergency food assistance.

Agricultural yields in some parts of the Sahel are estimated to fall by a stunning 20 percent per decade until the end of the century. These long spells of drought in the Sahel have also led to desertification.

The 10 countries that make up the Sahel region are home to 2.19 percent of the global population, yet contribute a mere 0.13 percent of the planet’s entire CO2 emissions. 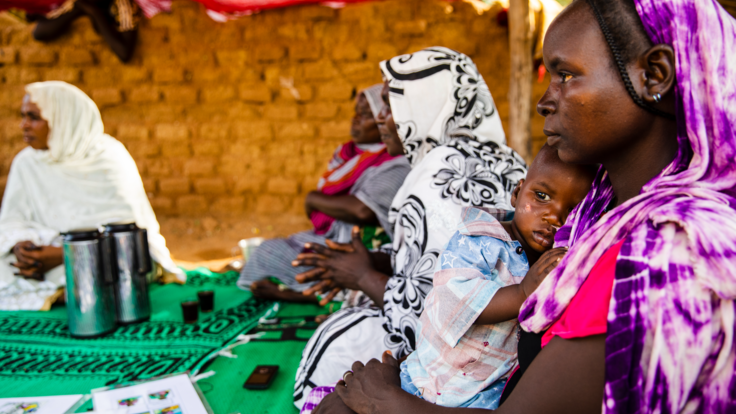 A mother in Mangalme, Chad holds her child during an IRC counseling session. In Chad, over one million children suffer from acute malnutrition.
Photo: Timothy Nesmith for the IRC

Where do global CO2 emissions come from?

The five countries and regions listed here are suffering disproportionate amounts of fallout from climate-induced disasters. Each country and region on this list has contributed significantly less than its fair share of global CO2 emissions.

In fact, all of the countries discussed here produce just 0.89 percent of the world’s CO2 emissions while making up 7.83 percent of the global population.

Many countries with more advanced economies emit significantly higher amounts of CO2 relative to their population size. The United States is responsible for 12.6 percent of global emissions despite only being home to 4.3 percent of the world’s population.

A matter of climate justice?

Young people increasingly want to see a world in which this happens. In the U.S., for instance, 61 percent of 18-34-year-olds believe that the international community has a responsibility to help countries in crisis like Kenya, Ethiopia, and Somalia lessen the impact of climate change.

A unified international approach is needed in order to create a better future for communities most impacted by climate change. The IRC urges world leaders to fund organisations working to combat the climate crisis and support evidence-based solutions in the communities around the world that are most vulnerable to the impacts of climate change. 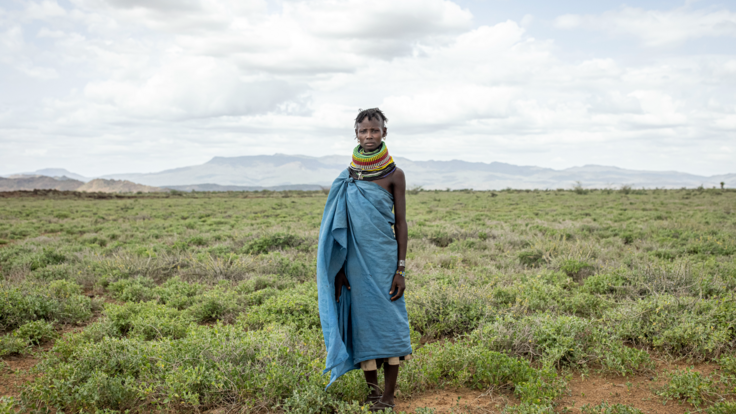 Lokiyoto lost two children of her five children to the drought in Kenya. “It makes me sad when my children are sick,” she says, “However they have been improving lately which makes me happy. I hope they can grow well so that when I m not around they can look after themselves."
Photo: Patrick Meinhardt for the IRC

Climate change is a humanitarian issue and the IRC has made addressing this problem a core pillar of our work. The IRC is actively working to help vulnerable communities respond, recover and prepare for future climate disasters. We help communities map climate hazards, develop early warning systems and train people to live sustainably- all while emphasizing the role of women and girls.

The IRC also partners with other organisations to advocate for policy changes that will reduce the impact of climate change while helping to support vulnerable communities around the world.