How is the coronavirus impacting domestic violence?

The coronavirus has caused a shadow pandemic of domestic violence that is happening behind closed doors, where women and children are bearing the brunt of the abuse. The IRC saw it during the Ebola epidemic, and we’re seeing it again now with COVID-19. Experts have warned that for every three months that the lockdown continues, an additional 15 million cases of gender-based violence will occur.

Half of the world’s population is in lockdown. Schools are shut, hospitals are being dominated by the COVID-19 response, and safe spaces are being shut down. Teachers and healthcare workers provide a vital lifeline for spotting and reporting abuse. The coronavirus has left women and children stuck inside with their abusers, without a way to report what’s going on. 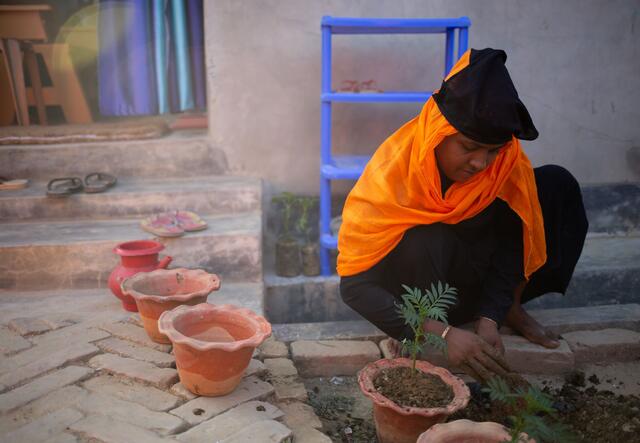 A volunteer plants flowers at the IRC’s Women’s Centre in Cox’s Bazar camp in Bangladesh, where women are struggling to report abuse since the pandemic began.
Photo: Habiba Nowrose/IRC

In the UK, the number of domestic violence cases has surged since the outbreak and there’s been a big increase in women calling helplines. In some countries where we work, we’ve seen a spike too. In El Salvador, for example, IRC partners reported a 70% increase among women seeking these services since the pandemic began.

Though experts warn that violence is rising due to COVID-19, access to services for survivors and those at risk has become more challenging in many contexts. This has resulted, in some places where the IRC works, in reports of violence against women and girls going down. In Iraq, our team went nearly two months without a reported case in March and April this year, compared to 70 cases for the same time period the previous year. In Bangladesh, there was a 50% decrease in reported cases in March compared to February and in Tanzania, reports fell by 30%. 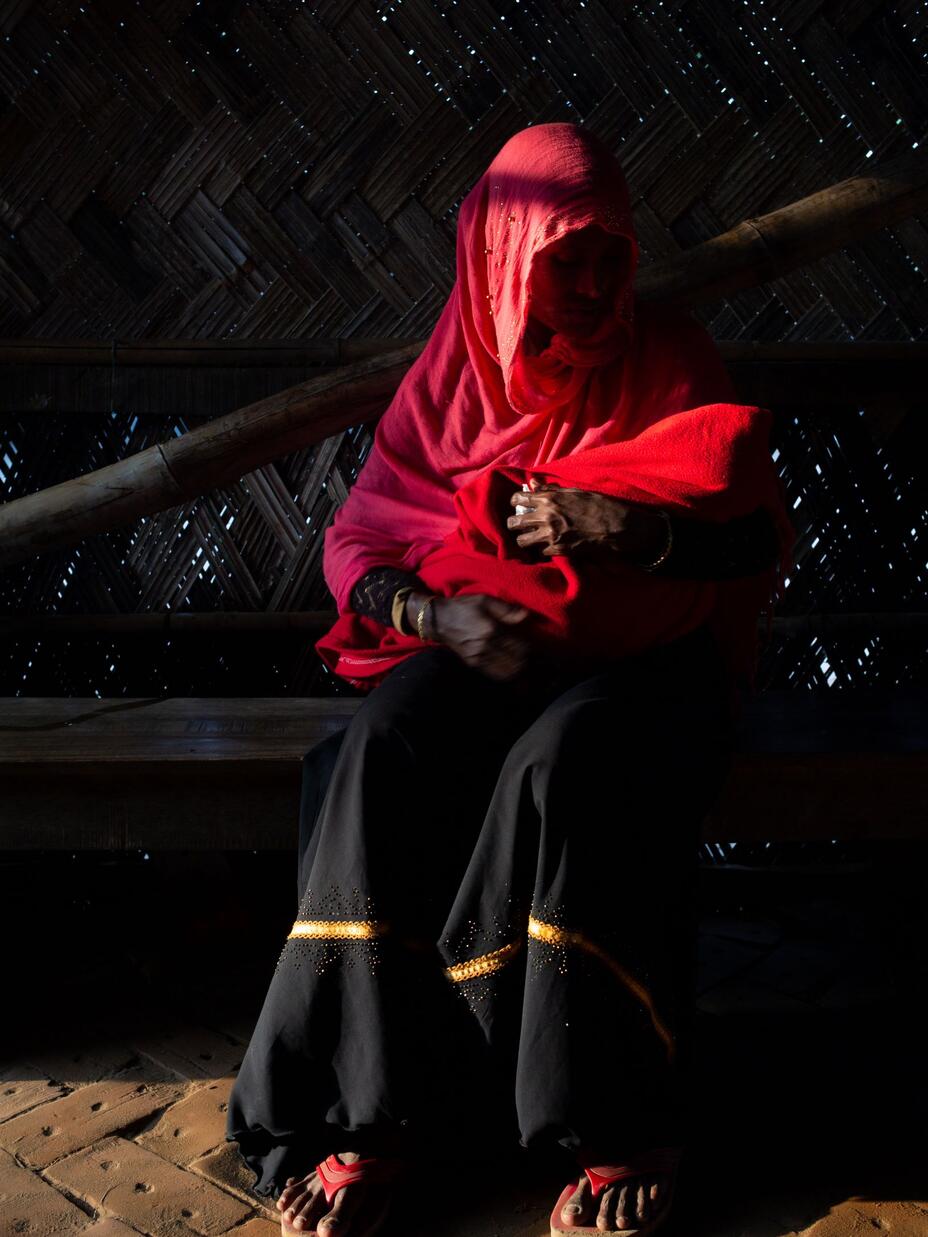 A woman holds her baby in Cox’s Bazar refugee camp in Bangladesh, where there is high rates of violence against women.
Photo: Habiba Nowrose/IRC

Our staff on the ground are deeply concerned by these figures, knowing that it does not represent a decrease in numbers - but instead a decrease in women being able to report what’s happening.

As Nicole Behnam, the IRC’s senior director for violence prevention and response, explains: “Lockdowns put those being isolated with their abusers at higher risk, with fewer resources and an inability to seek help. These decreases in women seeking services are heartbreaking, because they don’t tell us that violence is decreasing, but that at-risk women are losing their final remaining lifelines to services and safety.”

Adapting to save lives

The IRC is adapting our programmes to ensure we can still reach women and children at risk.

Where IRC staff are no longer able to access camps, the IRC has trained refugee volunteers via the phone to be able to raise awareness about remote services we’re now offering. We’re providing hotlines in many of the countries we’re working, from Jordan to Uganda. 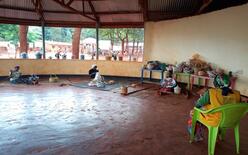 Women in Tanzania are allowed in the women’s centre a few at a time to ensure they can keep socially distanced. Here they continue to build their skills in basket-weaving.
Photo: Esther Karnley/IRC

Rawan*, a women’s protection and empowerment coordinator, who works in Erbil, Iraq explains: “There's been a lot of cases all over Iraq and it's definitely a big concern. Our centres are being closed down due to the lockdown. So we thought, how are we going to adapt to this? How are we going to make sure that we're still reaching women with all these challenges? We’re now doing tent-to-tent visits, making sure we are following social distancing, wearing protective gear, raising awareness, referring people, and making sure that we are listening to their needs, because that's the most important part: to make sure that the adaptation is still responding to the needs of women and girls.”

We’re determined to keep our safe spaces open where it’s possible, and have made changes like installing hand-sanitiser facilities outside and reducing the number of women allowed in at one time. Where 50 women used to be coming through the door at once, now just four enter the space at one time. We’ve worked closely with the women themselves to understand what times of day work for them.

Counselling and case management is a lifeline for survivors to rebuild their lives. We’ve continued to offer this face-to-face in some countries, like in Tanzania, where we ensure safe distances are kept between people and staff are given PPE to wear. Where that’s not possible, we’re offering mental health support via the phone to survivors.

We’re also working directly with health providers in some countries. In the Ivory Coast, we’ve trained medical staff to be able to identify and support sexual assault survivors, including during the COVID-19 pandemic.

In Lebanon, we’ve ramped up our support to ensure children are safe at home and we’re delivering messages via the phone to parents. 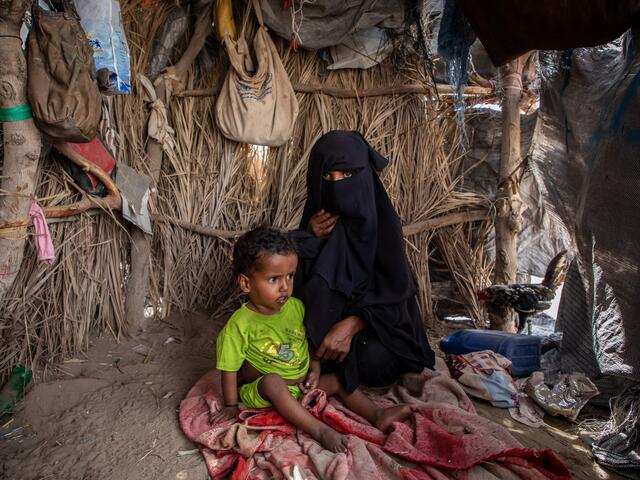 Nadia Mohammed Fadhl with her son Abdullah sit in their temporary shelter in the outskirts of Aden, Yemen. Displaced women like Nadia are at a particular risk to domestic violence and abuse.
Photo: Will Swanson/IRC

But there’s still much more to do. Many women we support do not have access to phones or the knowledge of how to use them to be able to use remote hotlines. The IRC is seeking more funding to be able to implement programmes that can improve digital literacy amongst the people we serve.

Preparing for the future

Eventually, lockdowns around the world will lift. When they do, we are expecting a huge spike in abuse to be reported by women who are able to escape the home.

The IRC is preparing for this time. It’s going to be a challenge but we won't give up. We know that our domestic violence services are vital and they do save lives.