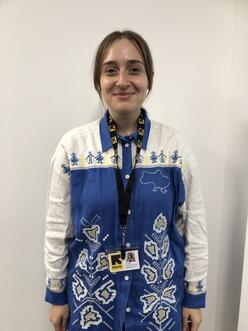 Originally from Kharkiv in eastern Ukraine, Inna Gordiienko left her home in Kyiv when war broke out earlier this year, and currently works for the IRC in the UK office. Below, she shares her story, as well as her favourite Christmas recipe for kutya, a traditional Ukrainian dessert.

At the start of the year, Inna was living in Kyiv with her British husband when he was advised by the embassy to leave due to the imminent threat of war. “I didn’t believe that the war might happen,” remembers Inna. “It’s the 21st century. What kind of person can start a war in the middle of Europe—in the heart of democracy?”

Despite not believing war could break out, Inna agreed to leave Kyiv with her husband and their dog. Originally, they only planned to leave for a few weeks to visit family. 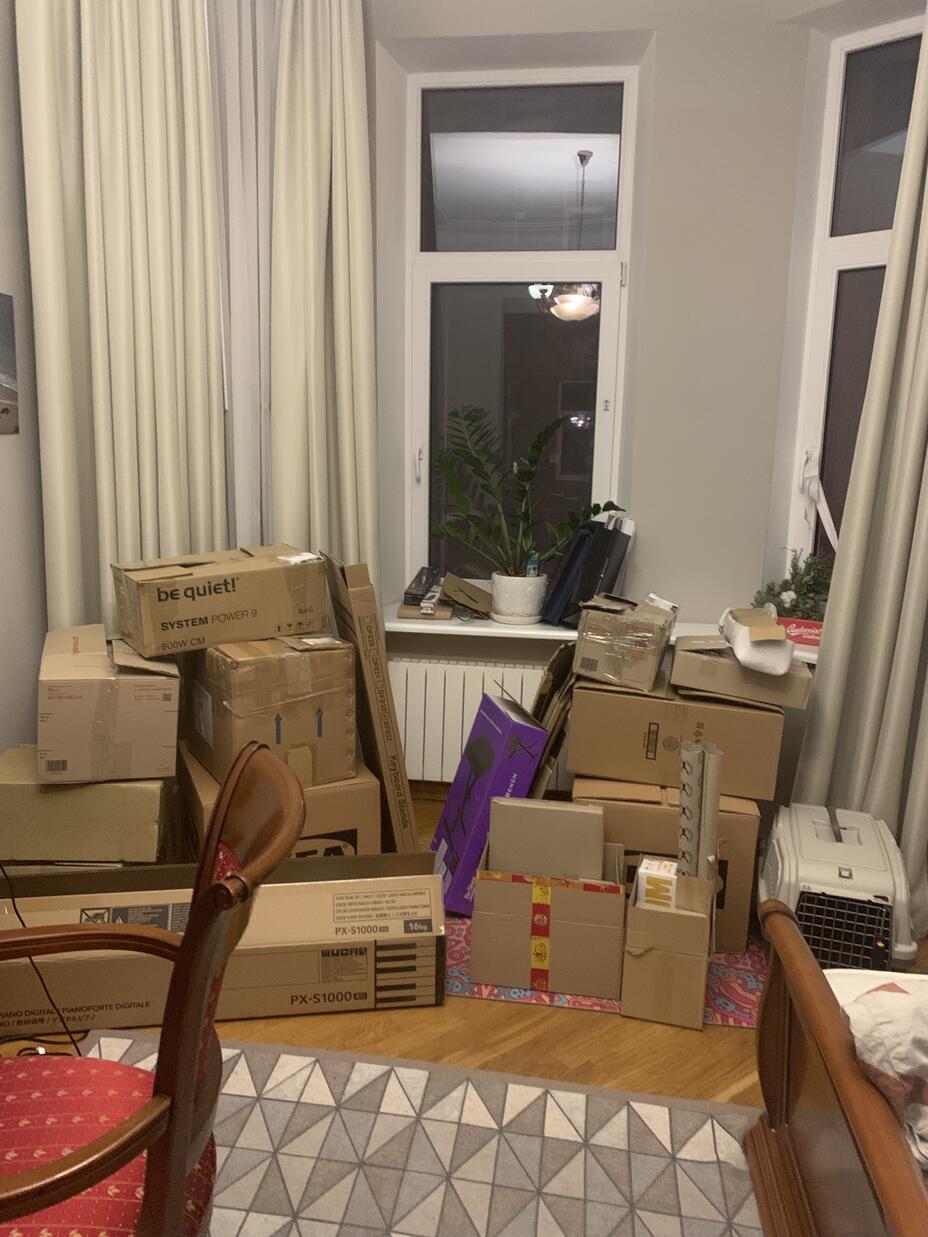 Inna’s flat in Kyiv, a few hours before evacuating. “I left the country just a week before the war,” says Inna. “We were living in Kyiv, both working in the international world, when it all started.”
Photo: Inna Gordiienko

On the 24th of February 2022, Inna’s mother called her with the news that rockets were firing on her hometown of Kharkiv. She soon discovered attacks were happening across the country.

“My hometown is 70% destroyed,” says Inna. “Some parts have been so damaged, it’s not acceptable to live there. Even the building my mother is residing in has been damaged. My grandmother’s house has been completely destroyed.”

Inna struggles with being so far away while family members are in danger. “Being thousands of kilometres away from home and feeling completely hopeless to help has been the toughest part.”

“When I realised that the war was ongoing—and because I hate being helpless—I started thinking about my own possible fundraising,” she continues.

As a keen runner, Inna had previously signed up for the Cardiff half-marathon, which presented the perfect opportunity to start raising money. She began to run in as many events as possible, sporting the Ukrainian flag to raise awareness and funds. 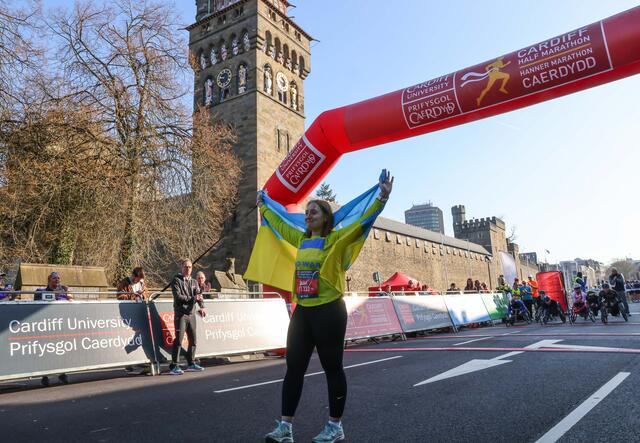 Since the Cardiff half-marathon, Inna has registered for as many races as possible. “I normally email all the organisers saying, ‘Hi, I'm Ukrainian, you know, I'm here’,” explains Inna, who always runs with a Ukrainian flag and top. “I ask for a minute of silence or a minute of applause for Ukraine and tell them it would mean a lot to all of us.”

As the war continued, Inna began to consider other ways of helping Ukrainians affected by the war. It was by pure chance she spotted a vacancy at the IRC for a Client and Community Outreach Officer, which she applied for in the very last hour before the deadline. She now works for the IRC helping Ukrainian refugees in the UK. “I love the role,” she says. “I love talking to clients and helping them, and providing them with information on how to integrate into life in the UK, because that's what I had to go through as well.”

Inna helps fellow Ukrainians learn to navigate the NHS, education systems, and other British services. Because many of Ukraine’s official processes are digitised and app-based, Inna found that UK paperwork can take some adjusting to. 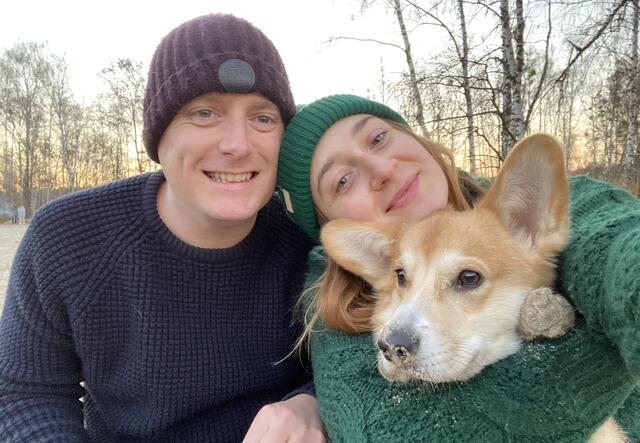 Inna with her husband and their corgi, Cooper, in Ukraine last November.
Photo: Inna Gordiienko

While Inna finds the job rewarding, she can’t wait until it’s safe to bring her new experiences back to Ukraine and begin rebuilding her life there. 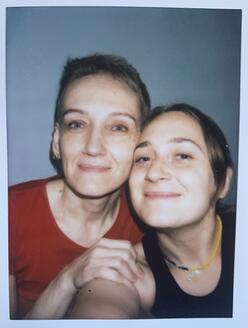 Inna with her mum, Oksana. Oksana is currently living in Inna’s rented flat in Ukraine, which only has a few hours of electricity a day.
Photo: Inna Gordiienko

“I had the perfect life in Kyiv,” Inna says. “And I still feel like Ukraine is my home. I’m 100% sure that as soon as there is peace, I’m going back there with my husband and our dog, because that’s where our life is. I love the UK and I love people here, but my heart belongs in Ukraine.”

Inna’s mum currently lives in their vacated flat in Kyiv. Inna worries about her mother—not only was the flat close to shellings that happened in October, but the onset of harsh winter weather makes conditions tough.

Inna describes how the winter months can be particularly severe in Ukraine, where temperatures can drop to -25℃ and the snow is so thick it’s hard to walk anywhere.

The bitter weather is even more dangerous since the city’s basic infrastructure has been damaged by the conflict. “My mother only has electricity for two hours in a 24-hour period,” Inna explains. “In that time, she has to cook food for herself, do laundry and heat up the flat by whatever means possible—and then survive the next 22 hours.”

Because there’s a shortage of electricity, and gas pipelines are damaged, people can just freeze to death because they won’t be able to do anything.

The IRC’s winter appeal for Ukraine supports those struggling with winter temperatures by providing blankets, warm clothes and cash assistance. “Having a blanket can actually save a life,” says Inna. 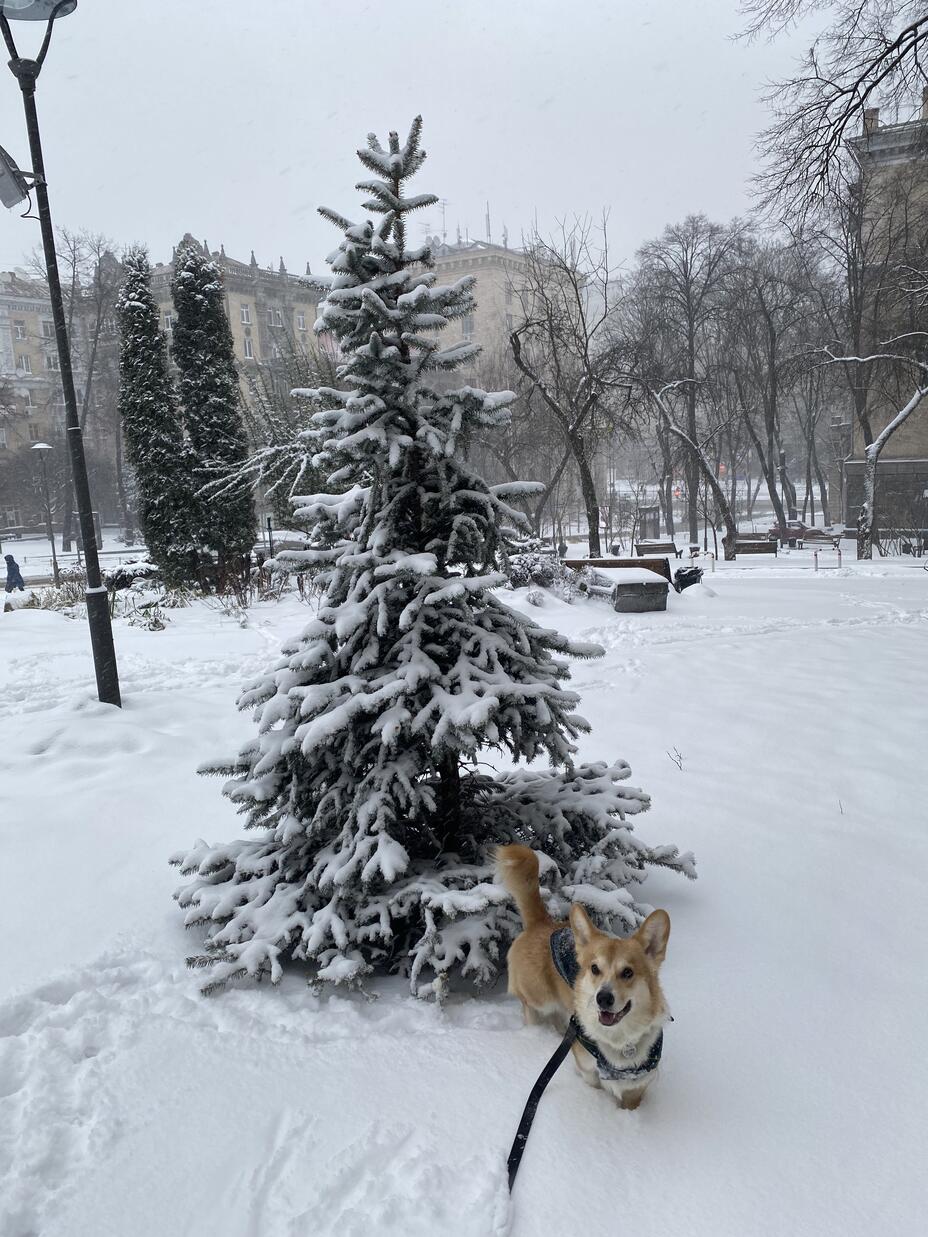 Kyiv in the snow. “Winters are super harsh in Ukraine,” recalls Inna. “Sometimes the temperature can drop to minus 25 degrees Celsius.”
Photo: Inna Gordiienko

As well as harsh weather, the winter months bring the holiday season, which will be very different for Ukrainians this year. “Christmas is very important in Ukraine. It’s one of those holidays where families will get together,” says Inna. “Christmas for most Ukrainians this year is going to be very challenging. Families will be split up, with wives and children being thousands of kilometres away from home, and fathers, partners and husbands defending the country.”

Despite being separated from her own family this Christmas, Inna plans to keep some Ukrainian customs alive. “We have a tradition of cooking 12 meals for the table,” she explains. “They can be small or big dishes. Everyone gathers around and looks back at the whole year that’s passed, then shares hopes for the future one, and makes wishes. We all share this very intimate moment.”

This year, Inna will be continuing tradition and cooking 12 dishes with her husband on Christmas Eve. “My favourite dish is called kutya,” she says. “It's a dessert with grains—usually wheat— and we add dried fruits, raisins, poppy seeds, and honey…It's just so delicious. Normally I make a lot and end up with huge pots of it that we eat for several weeks.” 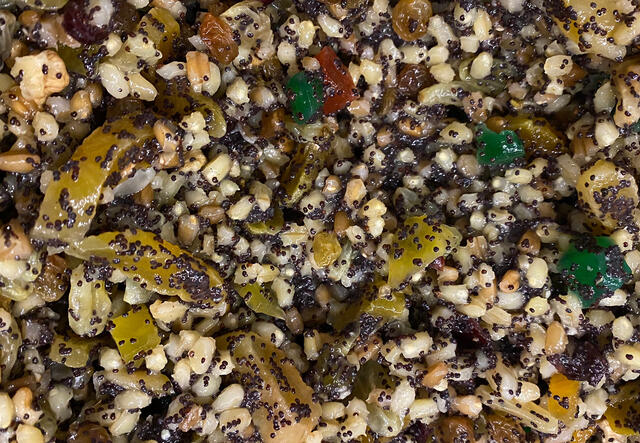 Here’s one Inna made earlier…and she plans to make kutya again on Christmas Eve this year.
Photo: Inna Gordiienko

How to make Ukrainian kutya

Inna’s recipe needs some overnight prep, so we recommend you read through all of the steps below before beginning. Inna starts making kutya on January 5th. She soaks the wheat overnight, then finishes the rest of the preparation on the 6th so it’s ready for Christmas Eve.

Many Ukrainians celebrate Christmas Eve on January 6th, with Christmas Day falling on the 7th. However, Inna notes that some people are switching to a December Christmas, and moving their celebrations to the 24th of December, instead.

Whether you’re making this pudding in December, January, or any other time of the year—Inna’s recipe walks you through the process step by step.

How you can help support Ukraine this winter

With the damage to infrastructure from war, families in Ukraine need your help to access the critical supplies they need to keep warm and safe over the winter months.

“I hope we will end up remembered in the world’s history for being a small country with a huge heart, and for our bravery,” says Inna.

“I know that the world is getting tired,” she adds. “We are getting tired as well as a nation. But we don't have any other choice than to keep on going. And for that, we need to have some support.”

Find out how the IRC is helping Ukrainians and make a donation.