Saving today for a better tomorrow

KITGUM, Uganda — Cavine Akello was a 17-year-old high-school student when she became pregnant with her son, Rwot Okonya Billgram, whose name means “God has helped me” in the Luo language of Uganda. Cavine’s parents died when she was a child and her grandmother, who raised her, died when she was 14. The father of her child abandoned her after she told him she was pregnant and later was killed in a car accident.

Now 23, Cavine has struggled alone for six years making ends meet for herself and Rwot.

“Life was very difficult,” she says. “I washed clothes to make a little money. I fetched water for building workers on construction sites. I could barely pay rent and school fees.”

Today, thanks to an IRC programme for young mothers, Cavine has landed on her feet. She bakes and sells “lagalagala,” a traditional Ugandan pancake, in a small market in a suburb of Kitgum, a town in northern Uganda. “I bake one hundred and forty cakes a day and sell them all. I make about fourteen thousand Ugandan shillings (three pounds) a day,” she says. 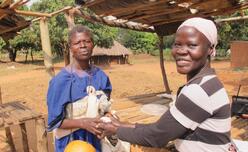 Last November, Cavine joined a village savings and loan association (VSLA) organised by the IRC in her neighborhood.

“At a community meeting I heard that the IRC was helping young mothers who were interested in starting a small business like tailoring or baking,” Cavine recalls. “I was so excited i immediately signed up."

The IRC has been working in this part of Uganda since 1998 in response to the devastation wrought by the rebel Lord’s Resistance Army (LRA), which killed thousands of people and displaced tens of thousands more during two decades of fighting. Since the LRA was driven from the region, thousands of people have returned from displacement camps to rebuild their communities .

There are 30 young mothers ranging in age from 17 to 25 in Cavine’s VSLA. Every week, the women chip a small amount of their household earnings into a cash box. When there’s enough cash, a member can take out a loan to start her own business—a small grocery store, hair salon or tailor shop—then begin to repay that loan to fund another woman’s business.

This particular association is known as a “VSLA+”—the young women are taught parenting skills as well as encouraged to save money. During the war years many young women like Cavine lost or were separated from their parents, experienced abuse or lacked positive parental role models.

“What I am learning in the VSLA is how to raise my son well so that he can become a responsible member of the community,” Cavine says. There are 20 such associations in Uganda working with some 600 women.  Cavine, who was recently elected chairperson of her VSLA+, is full of advice for other young women she meets who are facing similar struggles. “Be strong and accept your mistakes,” she tells them. “Don’t see them as the end of life. Do something positive that can change your life.”

With the savings she is putting aside from her baking, Cavine hopes to open a secondhand clothing shop. “I am earning and saving for the future and for the first time I am able to buy things for my son,” she says.

Hanging in her home is the suit of clothes she recently bought for Rwot. “Soon, he will be wearing this to church,” she says proudly.