In June 2012, widespread violence between Buddhists and Muslims in Myanmar's Rakhine State led to the displacement of 145,000 people. Five years on, nearly 100,000 still reside in camps on the outskirts of Sittwe, the state capital. The majority are Muslims who self-identify as Rohingya.

As Myanmar’s multiple, decades-old ethnic conflicts drag on despite renewed peace efforts, over a quarter-million people remain displaced and a half million are in dire need. Across Rakhine and other states, the International Rescue Committee has been responding to the ongoing needs of Myanmar’s most vulnerable to help them survive, recover and gain control of their future. We reached over 185,000 people in 2016 alone. 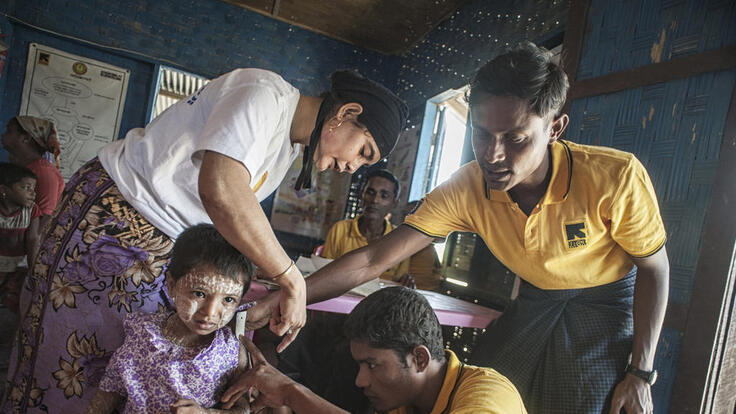 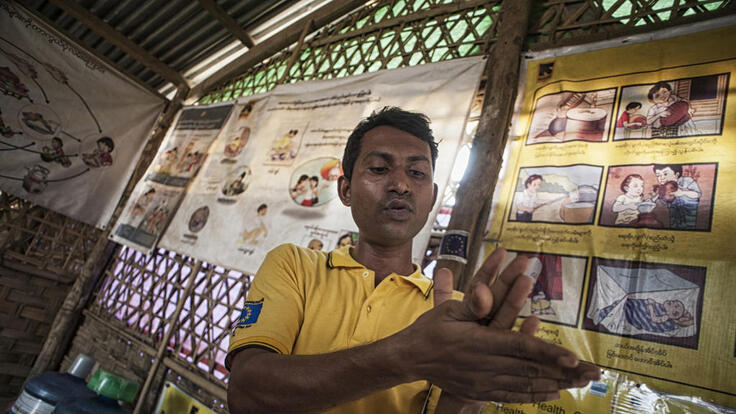 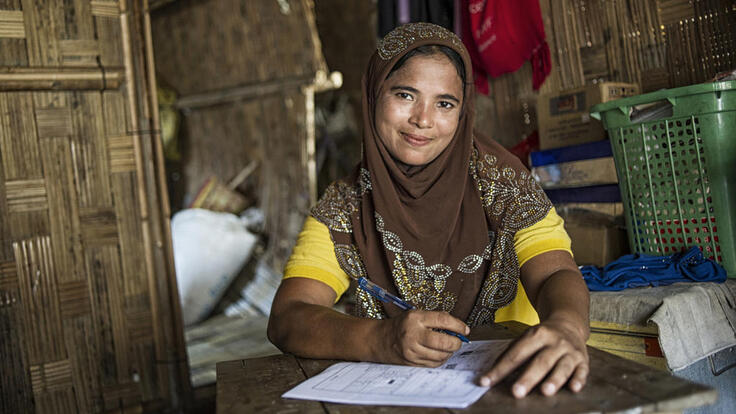 Ma Hla Hla May, 33, has been working as a community health worker with the IRC for 18 months in Da Paing Muslim camp. She registers patients and acts as a translator, takes temperature and blood pressure, facilitates education sessions, and provides support for government immunization efforts. 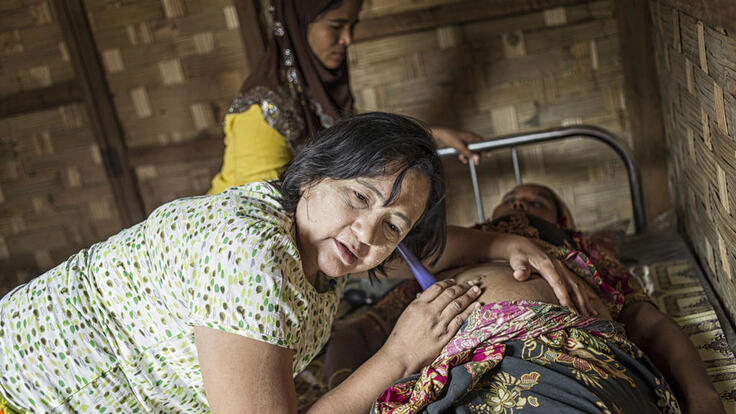 A clinic health worker gives an expectant mother a check-up. Ma Hla Hla May’s favorite part of her job is assisting with reproductive health work. “I like taking care of pregnant women,” she says. “I enjoy doing my job every day because I enjoy helping the community.” 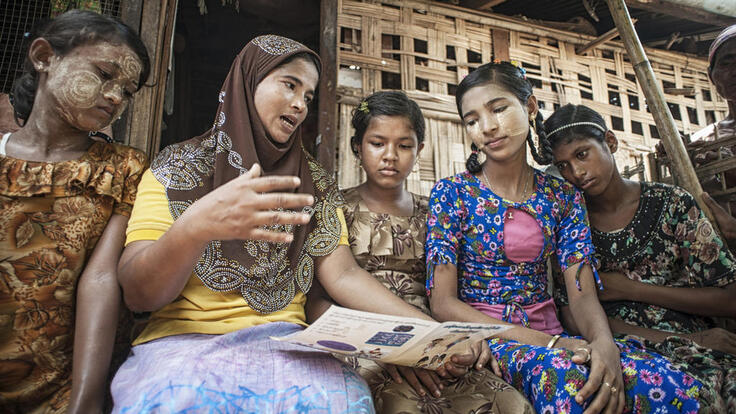 Although conditions have improved since Ma Hla Hla May arrived, she does not want to remain in Da Paing Muslim camp permanently. “The room where I live is very small, there is poor ventilation, and it can be noisy because of the thin walls,” she says. “I would like to go home—although my home was burned in 2012, so I don’t know where I would live.” 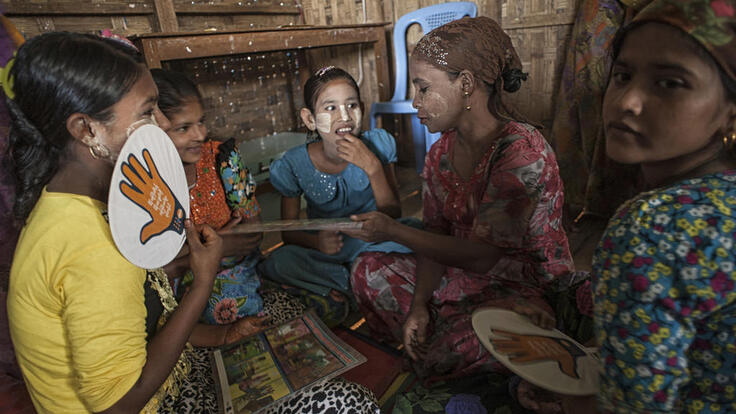 The IRC sponsors women’s protection and empowerment activities, refers women and girls who are survivors of violence to support services, and facilitates education sessions. 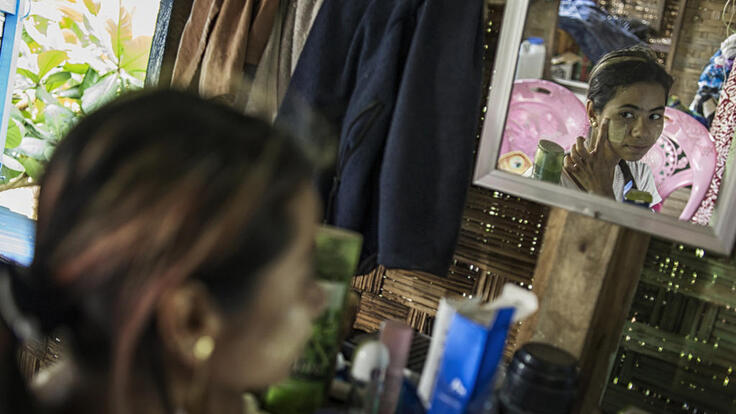 Nyo Nyo Aye, 23, lives with her parents and older sister in a Rakhine camp and has been working with the IRC as a women and girls’ wellness attendant for three years. 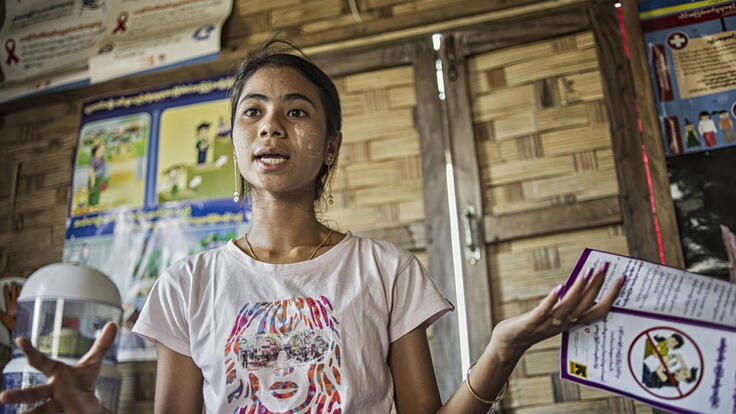 “My responsibilities include facilitating education sessions, checking medical supplies and assisting with life skills classes such as sewing,” says Nyo Nyo Aye of her work. 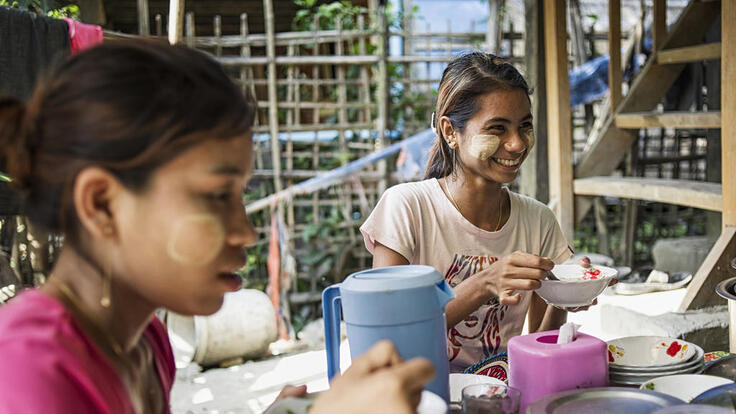 “I think that the sewing sessions are most useful because they help women in the community generate income," Nyo Nyo Aye says. "The education sessions are also useful because people learn about the consequences of early marriage and how to prevent it.”  Photos: Kaung Htet/IRC

In displacement camps and villages in Rakhine, with funding from European Humanitarian Aid (ECHO), the United Nations Population Fund (UNFPA) and Stichting Vluchteling (SV), the IRC is delivering emergency primary health care at 26 sites in Sittwe and Rathedaung and women and girls’ protection and empowerment activities at 17 sites in Sittwe.

Learn more about the IRC's work in Myanmar.