What if there was no clean water in the Midlands?

Ethiopia is currently in drought; it has been in drought since 2016 and the drought is the worst experienced for fifty years.

When did the drought start?

The drought in Ethiopia began in 2016 after the failure of two successive rainy seasons.  As a consequence, disease is spreading in the area following the increased use of unsafe water.  Its effects are not being felt by Ethiopians alone, but also by refugees from Somalia, South Sudan and Eritrea who have already fled one desperate situation, only to be faced with another. 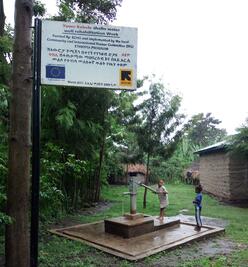 What does ‘access to clean water’ mean in practice?

Droughts are a main cause of limited access to clean water, and they make living situations difficult in multiple ways. Daily activities, like preparing food for your family, raising healthy cattle and keeping yourself and your home clean, become much more difficult and dangerous.

In Yubo Kebele, Southern Ethiopia, the sole source of clean water was a shallow water well built by an NGO in 1978. Six years ago, it stopped working.

Since then, locals have had to walk 40 minutes to and from the nearest river. There they collected unsafe drinking water to take home - water that significantly increased their chances of getting sick.

How does drought lead to disease?

The most obvious method of contracting waterborne diseases is by drinking unsafe water. However, this forms only one part of the picture. Unsafe water can contaminate food when used in cooking. Drought also means lack of water available for sanitation and hygiene. In this way, drought has many consequences that lead to the spread of diseases like acute watery diarrhea (AWD), which took hold in Yubo Kebele. The disease leads to severe dehydration and can be extremely dangerous to young children and other vulnerable groups.

In response to the outbreak the International Rescue Committee is working to improve conditions in the region, with the support of EU Humanitarian Aid (ECHO).

A major step was rehabilitating the shallow water well, so locals can again rely on accessible clean water. Not only can they now drink water safely, but they can use it to sustain themselves—to water crops and to give cattle clean drinking water.

The IRC provided 500 at-risk families with water treatment sachets, making water safe for drinking and cooking. Since the start of programme in late 2016, no new AWD cases have been reported.

The IRC has also helped the community take preventative steps: holding training sessions on proper sanitation—washing hands and cleaning cooking equipment, how to build latrines and how to chemically treat water to make it safe for drinking. These steps will make the community more resilient, and improve conditions well into the future.

In partnership with the European Commission's Humanitarian aid and Civil Protection department (ECHO), the IRC was able to respond rapidly to meet the water and sanitation needs of people in Wondo Genet.