In a world where leadership on humanitarian policy is desperately needed, the UK government has an opportunity to show it.

That was our message from Parliament Square in the shadow of the British Parliament – the powerhouse of UK politics.

#LifeJacketLondon saw a display of 2500 life jackets worn by refugees attempting the dangerous sea crossing from Turkey to the Greek island of Chios.

The used lifejackets - which ranged in size from adult through to children’s and even tiny babies’ - sought to highlight that lives are being lost in this crisis, and call on world leaders to consider the gravity of the decisions they have to make.

A call for action

As world leaders met in New York for the UN Summit on Refugees and Migrants and the Leaders’ Summit on Refugees hosted by President Barack Obama, we gathered to highlight our case that the refugee crisis doesn’t have to unfold in this way. With over 3500 dead or missing in 2016 alone, this comes as a result of a failing policy which has denied people sufficient legal routes to Europe, forcing them to undertake life threatening journeys.

We believe there is an alternative, and one such alternative is to choose structured refugee resettlement in Europe.

The success of President Obama’s Refugee Summit will be tested by whether the commitments are delivered on.
Photo: Snappin&#039; Turtle

The refugee crisis, on European shores, has opened our eyes to levels of migration that are unprecedented, and global. 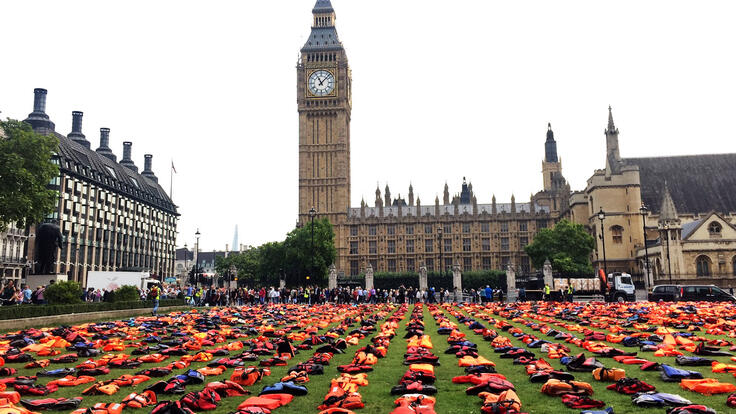 #LifeJacketLondon saw a range or organisations come together to highlight the true cost of the refugee crisis. Photo: Jamie Wright / IRC

The event concideded with the UN Summit on Refugees and Migrants in New York. Photo: Snappin' Turtle 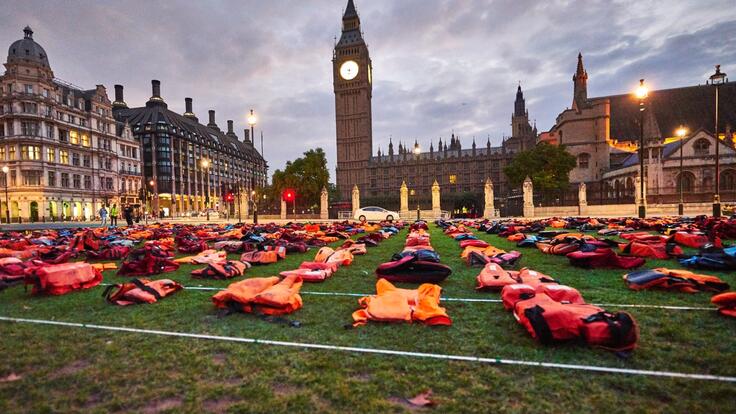 The UK can be proud of its role in giving aid and resettling refugees but should step up its resettlement commitment. Photo: Snappin' Turtle

The refugee crisis on European shores has opened our eyes to levels of migration that are unprecedented, and global. More than 65 million people were displaced from their homes in 2015, forced to flee violence, war and persecution, the likes of which many of us cannot even imagine.

As more people are forced to become refugees than ever before, our leaders face a choice. To stand by, or to champion a new approach to the crisis — and Choose Humanity.

Joining other aid agencies and charities including UNHCR, World Vision, Migrant Voice and MSF, the life jacket display sent a message to those sitting in Parliament.

The success of President Obama’s Refugee Summit will depend on whether the promising commitments made by country leaders gathered in New York, are delivered on.  The UK can — and must — do more on the global refugee crisis and prove itself a leader not only in Europe, but on the world stage.

The IRC proposed that:

Because the truth is this: The most desperate will continue to make dangerous journeys as they are left with little choice. We need to make sure they can arrive safely, in a controlled and structured manner, prioritising the most vulnerable.