London, United Kingdom, November 29, 2022 —  His Majesty The King today met with CEOs and experts from the 15 charities that make up the Disasters Emergency Committee (DEC) at Buckingham Palace. The group, which also included senior UK Government officials, recognised the life-changing impact of funds given by the UK public to international humanitarian crises and discussed how the changing climate is affecting the world’s most vulnerable communities.

DEC’s recent Pakistan Floods Appeal has now raised an astounding £38 million, thanks to the generosity of the British public with donations also from Their Majesties The King and The Queen Consort and Their Royal Highnesses The Prince and Princess of Wales. The appeal also received £5 million in UK Aid Match from the UK Government. 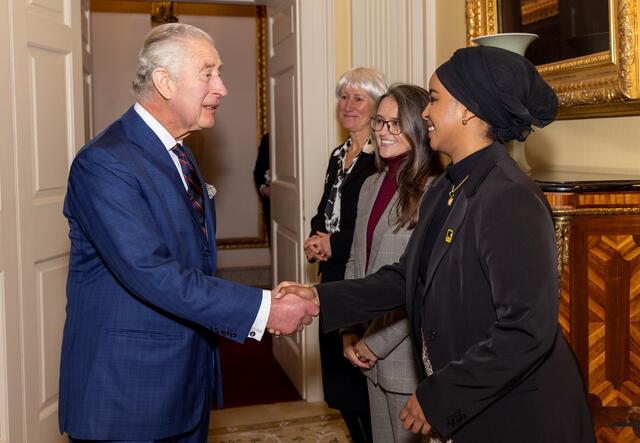 The meeting focused first on Pakistan, where unprecedented rainfall caused devastating flooding this summer, leaving millions homeless. Since the flooding, the country has been affected by a secondary health crisis, as waterborne and mosquito-borne diseases proliferate through the stagnant waters. Eleven DEC charities are responding in Pakistan, providing food and clean drinking water, shelter, sanitation and healthcare to people who lost everything in the floods.

DEC charities also spoke to His Majesty about the situation in East Africa, where families are facing a devastating hunger crisis due to extreme drought – a symptom of the changing climate. The DEC is monitoring the situation, and many of our member charities are already responding on the ground. The drought in Ethiopia, Kenya and Somalia is the worst in living memory, killing crops and livestock, while in South Sudan severe flooding has destroyed successive harvests. Conflict has exacerbated the situation in several areas.

The DEC charities’ meeting with The King concluded in a discussion of the broader humanitarian picture, including the situations in Afghanistan and Ukraine.

Like Pakistan and East Africa, Afghanistan has been affected by the fallout from Covid-19 and rising food prices due in part to the war in Ukraine. The DEC’s Afghanistan Crisis Appeal launched last December raised £51 million and has been providing a lifeline to hundreds of thousands of people facing food shortages and a lack of healthcare following a severe drought and the collapse of the economy.

The DEC’s Ukraine Humanitarian Appeal has raised over £380 million and is supporting people in Ukraine as they face the cold of winter amid power cuts and damage to homes, as well as refugees in neighbouring countries.

“We've seen and heard so many times now how the climate crisis is causing or exacerbating humanitarian crises. The rains fail, or come too heavily, or at different and unusual times. For many people and communities already on the edge of disaster they simply find themselves pushed over the brink. As we all grapple with the impact of climate change we warmly welcome His Majesty The King’s interest and support in our work in responding to the needs of those most affected and who are often those who have done the least to cause it.”

“Resilient communities have been stretched to breaking point by season after season of failed rains. Now, the fifth rainy season in a row is forecast to fail, and water is becoming scarcer every day. Many people have also lost the livestock they depend upon to feed themselves and make a living.”

Waseem Ahmad, CEO of Islamic Relief Worldwide, said: “I have seen families in Pakistan struggling to rebuild after the floods in 2010 and 2016, only to lose everything again now. It is like wading against a wave that keeps knocking you over. People are on their knees. Islamic Relief and our fellow DEC charities are providing shelter to people whose homes have been destroyedso that they can live with dignity. We’re giving food and cash assistance to those whose stores and harvests were washed away. And we’re providing healthcare to people who would otherwise be unable to reach it. But we need global action to prevent extreme weather events getting even worse, and everything that people have worked for being swept away again.”
Catalina Jaime, Climate and Conflict Manager at British Red Cross, said:
“Our study on the link between the Pakistan floods and climate change suggested a strong link between the rise in global temperatures and more intense rainfall in Pakistan. These floods had a devastating impact on communities across Pakistan, many of whom are especially vulnerable because of existing inequalities. Looking to the future, for a climate 2°C warmer than in preindustrial times, models suggest that further global warming will make these heavy rainfall episodes even more intense. In human terms, that means more people will be in danger all over the world. While humanitarian agencies like the Red Cross will continue to be there to support communities around the world prepare for, respond to, and recover from the impact of the changing climate, we also need global leaders to act now to prevent these crises becoming more frequent and more severe”.

** Spokespeople, recent photos and footage of the Pakistan Floods response are available **

About the DEC Pakistan Floods Appeal: Eleven of the DEC’s 15 member charities are confirmed to be responding either directly or through trusted local partners and will receive funds from this appeal. The 11 members responding so far are Action Against Hunger, Age International, British Red Cross, CAFOD, CARE International UK, Concern Worldwide UK, International Rescue Committee UK, Islamic Relief Worldwide, Oxfam GB, Save the Children UK and Tearfund.

The UK government matched, pound for pound, the first £5 million of public donations to the DEC Pakistan Appeal through the Foreign, Commonwealth and Development Office’s UK Aid Match scheme. This was part of a £16.5m package of support to provide immediate help to people living in the most hard-hit areas.

Through UK Aid Match the Foreign, Commonwealth and Development Office gives the British public the opportunity to have a say in how the UK aid budget is spent whilst boosting the impact of the very best British charities to provide effective support to low-income countries. The UK Government’s match funding to the DEC Pakistan Appeal allowed DEC member charities working on the ground to reach even more people in need.

UK Aid Match has increased the impact of numerous DEC appeals to help those in need around the world, including most recently to support people affected by the conflict in Ukraine and to provide life-saving humanitarian aid to people in desperate need in Afghanistan.