After first travel ban, Syrian family relieved to be reunited in the U.S.

Among the vast crowds rallying in downtown Seattle on the evening of Jan. 29 were Emtisal and Ahmed Bazara, refugees from Syria. Their two older children had been barred from entering the United States because of an executive order issued by President Trump two days earlier.

Emtisal looked around at her new American friends who promised that they would fight for the family until the end.

Democracy was a foreign word for this couple who in 2012 fled from Aleppo, a city ravaged by a brutal civil war now entering its seventh year.

Newly arrived in the United States, they were hesitant to speak out against the order temporarily banning citizens of seven predominantly Muslim nations, including Syria. Back home, if they protested against the government, they would have been killed, they explain.

But, they soon realised that when you raise your voice in America, you can witness profound change. 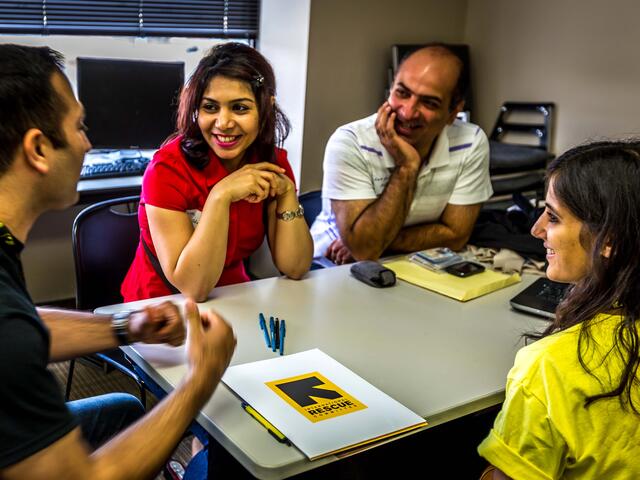 “It was difficult for them to understand that as an American, you have the freedom of speech, you can ask for your rights,” says Elfatih Abdelnabi, who works as an immigration assistant at the International Rescue Committee and serves as interpreter for the Bazaras. “Emtisal and Ahmed now speak out freely, without fear, about the rights of refugees like themselves.”

For the first time, I experienced democracy.

For days, the Bazara family attended rallies, marches and press conferences, eager to share their story. They were the true victims of terrorism, they told all who would listen.

“I remember at the rally Emtisal spoke to everyone about where they came from and what kind of family they were,” says Elfatih. “Ahmed expressed how he respects the country and its laws, but said they are not the terrorists—they are a peaceful family caught up in between. They just want to live a happy life with their children.”

The Bazaras who have four children have always been a tight-knit family. Prior to the outbreak of war, they lived comfortably in Aleppo’s suburbs.

Ahmed describes his former home as a villa with a lush garden and large rooms to host friends and families.

The couple had established two successful businesses: Emtisal ran her own beauty salon adjacent to the house, while Ahmed worked as a mechanic. When their daughter Jaidaa was married, they insisted that she and their new son-in-law, Abdulmalik, live at their home. 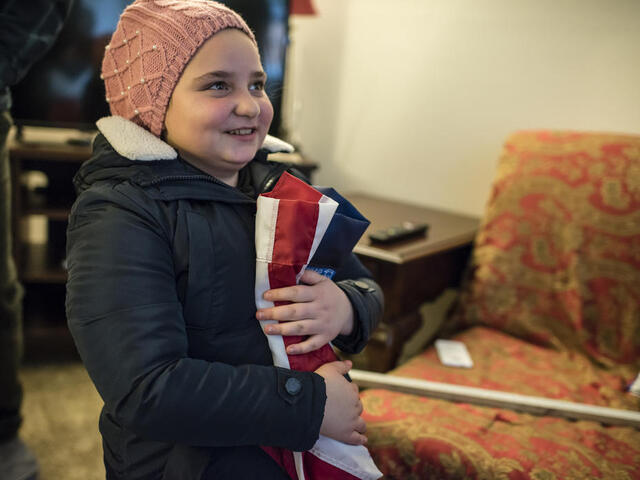 11-year-old Alaa loves sports like basketball and soccer and is fluent in both Arabic and Turkish.
Photo: Nick Hall/IRC

They never imagined war would break out, but when in 2011 bombs began to drop on their streets and destroy neighbours’ homes, they knew their lives had changed dramatically.

“We would hide in our basement,” recalls Emtisal. “Our friends would come hide as well, since we had a lot of room. They would run over as the planes flew above us.”

In the face of conflict and uncertainty, the Bazaras stood firm. But one afternoon, when the skies were calm, Ahmed and his eldest son Walid went in search of vegetables for the evening meal.

The routine trip turned nightmarish when a bomb fell near Walid. He escaped unharmed, but the Bazaras decided it was time to leave Syria: They couldn’t bear the thought of losing a family member.

“I still feel this pain when I remember,” Emtisal says, placing her hand over her heart. 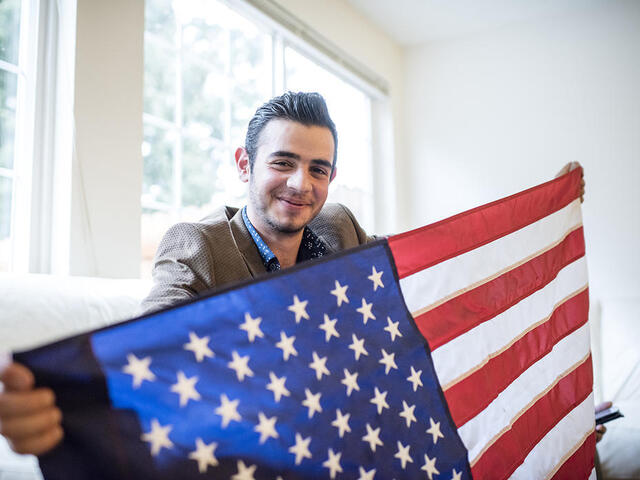 The family fled to Jordan, taking with them few belongings, and lived there for two years. In 2014, they moved to Turkey and applied for refugee resettlement in a third country. They were fortunate: They were given a choice among Germany, Sweden, Denmark and the United States.

The Bazaras underwent the exhaustive U.S. vetting process—five separate interviews over two years. The third interview was the hardest, Ahmed recalls. Officials, including one who identified himself as FBI, asked an endless number of personal questions about their lives in Syria. 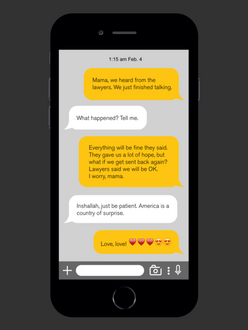 Jaidaa texts her mother about a meeting with lawyers a day after a federal judge halts the travel ban.

The parents feared the family would be separated since their married daughter, Jaidaa, and her husband had filed their own case for resettlement. Luckily, everyone completed the process simultaneously. It was during Jaidaa’s compulsory medical screening when her pregnancy was confirmed.

The IRC resettled Emtisal and Ahmed, along with their younger children, Alaa, 11, and Mohamed, who had recently turned 18, in Tukwila, a city near Seattle, on Dec. 14. Walid, Jaidaa and Abdulmalik were scheduled to arrive five days later.

Although their flights were rescheduled twice, the family was confident everyone would be reunited—unaware that the stroke of a pen would throw their lives into chaos.

“We are a simple family and we are very close to each other,” Ahmed says. “We don’t dream of becoming rich. Our only dream is to live together.”

His voice cracks when he adds, “I have been living and working hard, only to see...the smile on my children’s faces.”

The IRC provided the parents with emergency counselling to cope with the news of the Jan. 27 refugee ban. 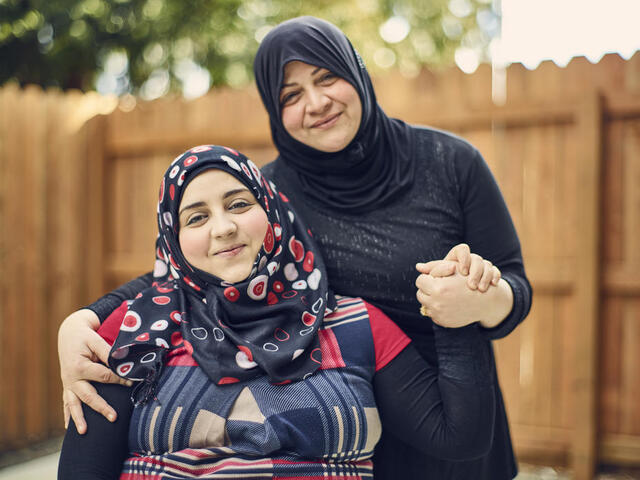 “It has been an emotional rollercoaster for the family, which has had significant impact on their sense of wellbeing,” says Nicky Smith, head of the IRC in Seattle.

“They just wanted to be with their daughter during the last stages of her pregnancy. That level of emotion is exhausting, but Emtisal, especially, remained defiant. Throughout this experience, they found their voice.”

The family had moved to a larger apartment and were preparing a baby room with a crib, toys and donated clothes for their first grandchild.

“All they wanted was to be together,” says Cari Conklin, who created a Facebook group to galvanise community support for the Bazaras and other resettled Syrians. “They’ve gone through horrors no human being deserves.” 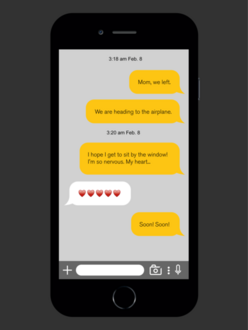 Jaidaa sends her mother a final message before departing Turkey for the United States.

At the Bazara's home in Tukwila, Emtisal and Ahmed are hard at work in the kitchen. Today is the big day. The Bazara family will be reunited with their children.

“When the ban was lifted on Friday, we felt a big amount of joy,” says Emtisal. “We felt our life was returned back to us after we thought it was over.”

Walid, Jaidaa and Abdulmalik had boarded a plane from Ankara on Feb. 7, and landed in Los Angles the next day. Emtisal and Ahmed were waiting anxiously by the phone, as they knew immigration could take up to eight hours. They worried their children would be turned back again.

Tears and solace, a Syrian family made whole again

The Bazara family from Aleppo, Syria were reunited at Sea-Tac International Airport on Feb. 9 after three family members were banned from entering due to Trump's executive order. Photos taken by Nick Hall.

More than a dozen friends and neighbours came to welcome the Bazara children to America. 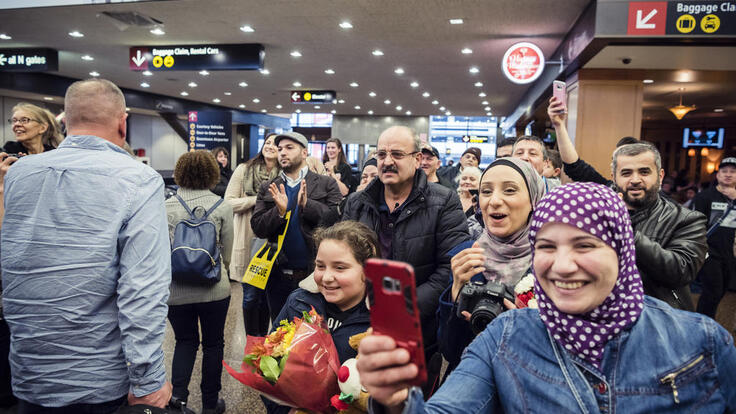 More than a dozen friends and neighbors came to welcome the Bazara children to America. 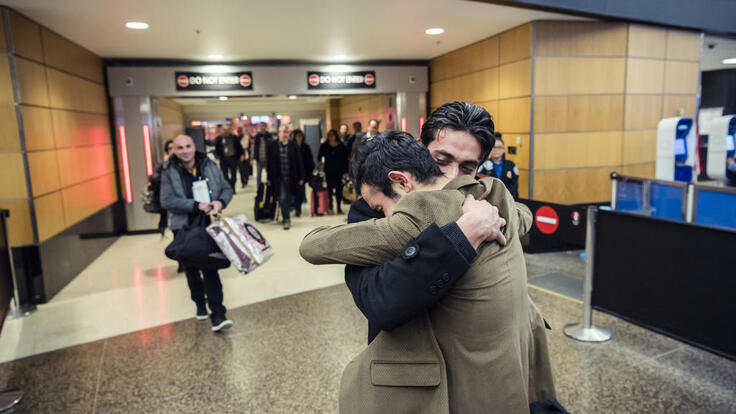 18-year-old Mohamed rushes to hug his older brother, Walid, who dreams of becoming an engineer. 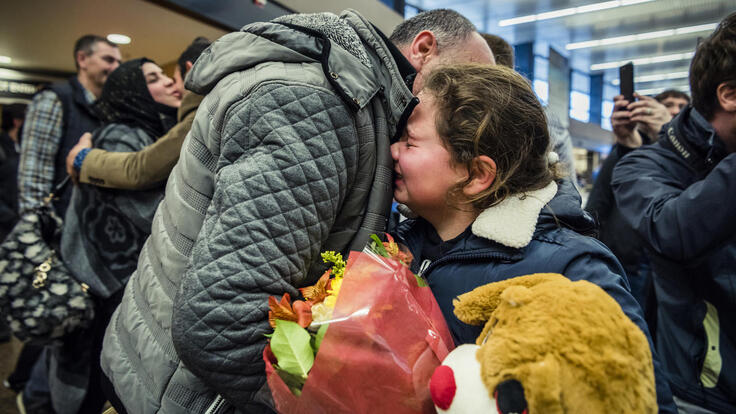 11-year-old Alaa cries as she sees her brother-in-law. 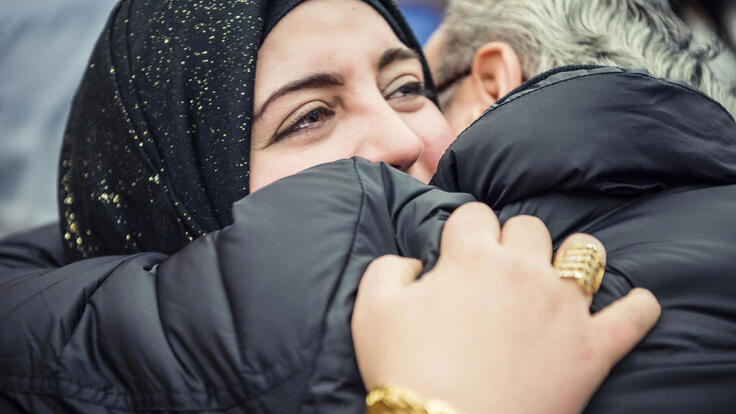 23-year-old Jaidaa, who is almost eight months pregnant, with her father Ahmed. 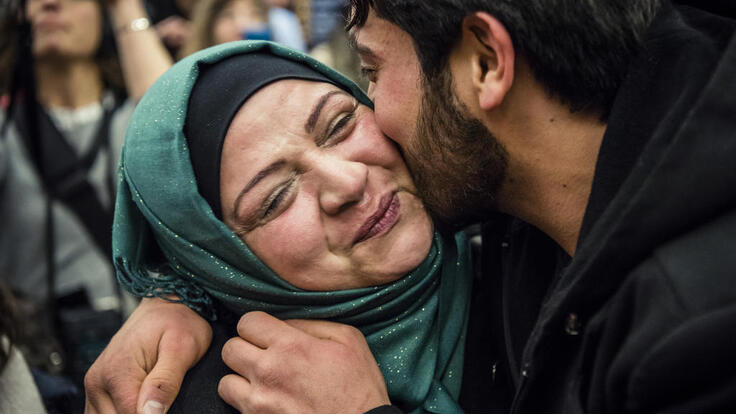 Emtisal embraces her son Walid to cheers from well-wishers. "I wasn't expecting such a welcome," says Walid. "I want to thank the American people for standing by us." 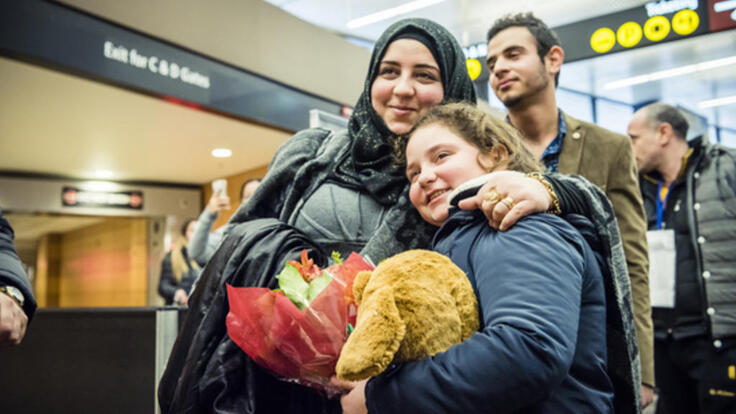 Jaidaa, left, with her younger siblings Alaa and Mohamed. 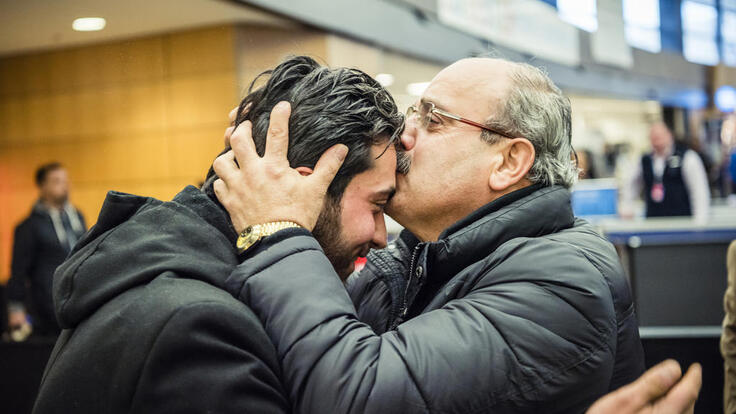 “Today I was reassured that the U.S. is the land of liberties and land of justice and the law is above all," says Ahmed, right. 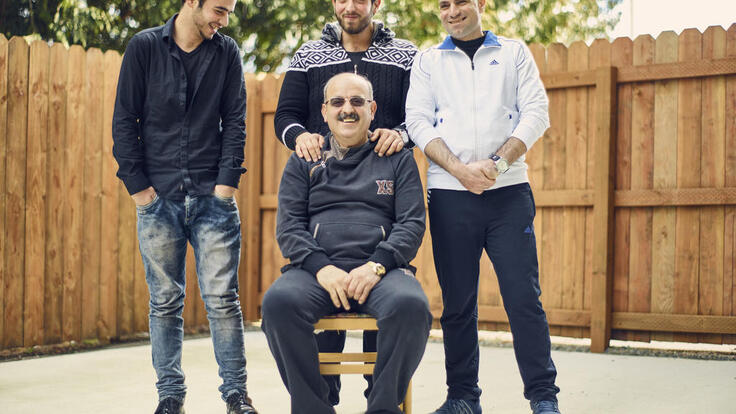 Ahmed (centre) with his sons Mohamed and Walid and son-in-law Abdulmalik at their apartment in Tukwila. 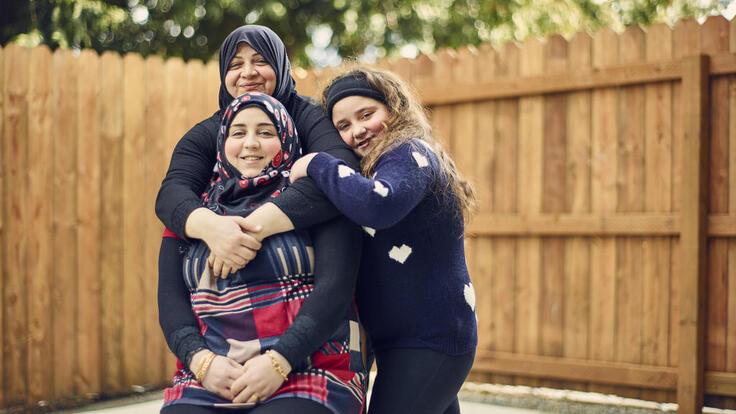 Jaidaa (centre) with her mother and sister Alaa. "I'd like to tell people who are in a similar situation to be patient and believe in the American people," says Jaidaa. 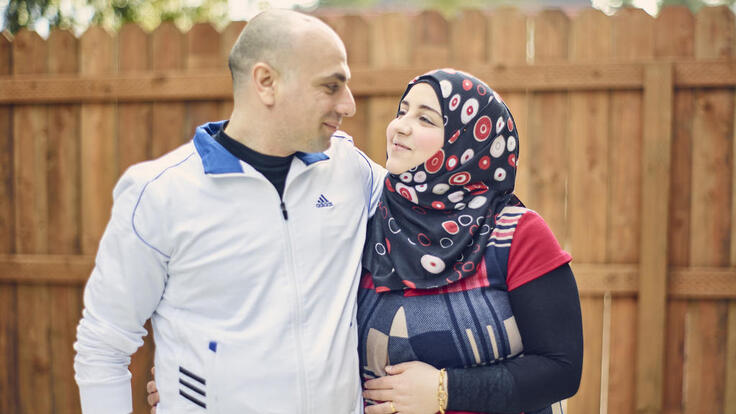 aidaa with her husband Abdulmalik. The couple is thrilled that they’ll be able to raise their baby daughter in a free and diverse country.

“All of us, we witnessed how difficult it was the first time,” Elfatih consoles the family. “Look at where we are now.”

Around 6:30pm, Ahmed’s phone rings. Walid, Jaidaa and Abdulmalik have made it through immigration. Ahmed wipes away tears and clasps his hands in a gesture of thanks. His children are free.

Later, the three would land at Sea-Tac International Airport to the cheers of more than two dozen well-wishers, including friends from the Syrian community who helped to hoist an IRC banner and a large American flag.

Mohamed would rush forward to embrace his brother Walid. Alaa would run to her sister Jaidaa and hand her flowers. Jaidaa would kiss her mother’s hand and hold her father’s arm. The crowd would watch, crying and cheering as they welcomed their new neighbours. 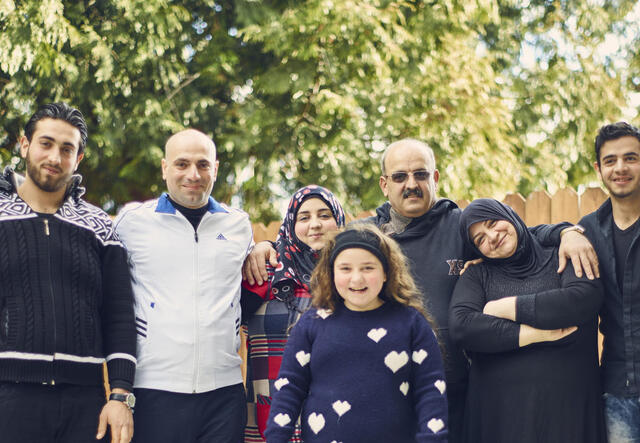 The Bazara family at their apartment in Tukwila, Washington with the IRC’s Elfatih Abdelnabi (back-center). "We were on this journey with them; we felt their pain and now their joy," Elfatih says

And one onlooker would declare, “They’ve made history.” Twenty minutes before their arrival, Trump’s appeal to reinstate the travel ban had been denied.

As for the Bazaras, their world had changed, indeed, more than they could have imagined.

“Today I was reassured that the U.S. is the land of liberties and land of justice, and the law is above all.” Ahmed said.

“America is the land of miracles,” his wife agreed.