In 1996 violent conflict in the Democratic Republic of Congo forced people to flee their homes, often with little more than the clothes on their backs. Many crossed Lake Tanganika into Tanzania and found refuge in the newly established Nyarugusu refugee camp. Today, more than 64,000 people from the Congo, Burundi and Rwanda live in Nyarugusu, over half of whom are children.

In the past three weeks a further 50,000 Burundians have arrived in the camp, displaced by violence around the elections. The IRC is there,  providing support in the form of child protection and youth development activities, as well as health services and women’s protection and empowerment programmes. It also supports education across the camp, in partnership with the European Commission’s Humanitarian Aid and Civil Protection department (ECHO).

Meet Amisi Sungura Bakari, 26, a Congolese refugee and a member of the Parent Teacher Association at Fortunata Pre-School, who lives in the camp along with his young family.

My name is Amisi Sungura Bakari, I am Conogolese. I am from the Bembe ethnicity from South Kivu.

I was very young – 8 years old – when my father died in 1996. My family was completely massacred. My father, my aunt, uncle, my brothers, we lost all of them.

At that time, we were poor and isolated. My father had a small shop. He was not rich, the business was just enough for us to live on. When the war started the leader of the militia said to my father “Sir, it is time for you to join us to war against the government.”

As a religious man, my father refused.

People came to the house at night. After that, my brothers and sisters and I were just told that we should stay out of our house, stay outside. So we were gathered up by the neighbours in the village who then brought us here to the camp. I didn’t see either of my parents for almost 4 years.

We arrived with ripped clothes and no shoes on. Then we started school and we studied under the trees. And then a few years went by and we met my mother again. 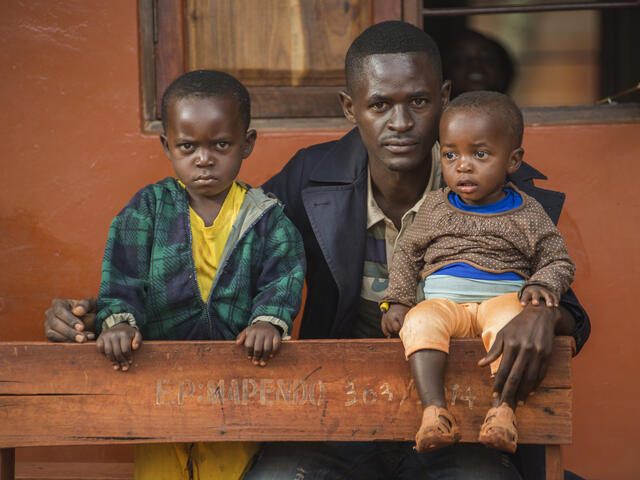 Amisi Sungura Bakari, pictured left, with his children, fled violence in DRC and came to Nyarugusu as a child.
Photo: Peter Biro / IRC

We were filled with joy and then we began to cry. We sat with my mother and she told us what happened to my father. They killed him because he refused to be part of their armed militia.

My mother warned us “never, ever think of returning home my children. The people there don’t like you anymore. If you go there it will be dangerous. Stay here and pray to God that he will give you what you need.”

And now we are older, we have finished school, we have families of our own. Every morning my son calls me and says ‘Dad, take me to school.’ And this makes me very happy.

But a question I ask now is what will the future of this little one look like?”

Mr Bakari’s son, Emedi, is four years old and has spent his whole life in Nyarugusu refugee camp. He studies at Fortunata pre-school built and resourced by the IRC and the European Commission’s Humanitarian Aid and Civil Protection department (ECHO) as part of the EU's Children of Peace initiative. The EU Children of Peace initiative aims to train teachers, rebuild classrooms, provide quality education, as well as leisure activities, and help children have a normal childhood. The IRC is also working closely with parents and the community to invest in the futures of their children through education.