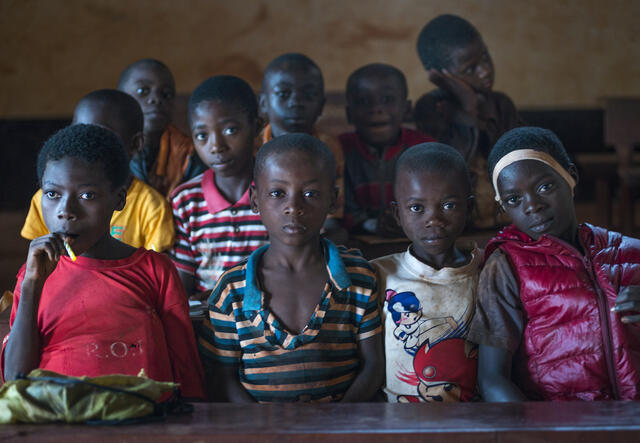 Children at Nyarugusu Camp in Northwestern Tanzania at the Fortinata Pre-School, run by the IRC.

Nyarugusu Camp in Northwestern Tanzania is home to over 66,000 people, providing refuge to Congolese and Burundians who fled fighting in their home countries since the 1990s. Many of the 40,000 children who live in Nyarugusu have spent their whole life in the camp. Prior to the IRC programme many of these children had no opportunity to go to school, and those who did had no access to proper facilities.

“Before the children were not going to school, but after seeing the construction of the beautiful classrooms children were coming by themselves” explains Nyasa Bitondo, a 58 year old Grandma who has lived in Nyarugusu Camp for 19 years.

“My grandson told me to take him to school. His name is Raphael and he is four. I registered him when he was younger but he never came. After having the learning materials in school, and chairs, he is always attending now. He is always the first to wake up and get ready for school,” she continues.

“Before the pre-school the children gathered under the trees, in the churches, and other buildings with volunteers. They were taught by young people who volunteered and older teachers. Despite this environment the children were encouraged to come. Now the children are even more ready and motivated to attend school” says Faustin Mwenebatu Chondo, a parent of 11.

“IRC has done a lot to improve the school environment and now our children are learning in a beautiful environment” adds Amisi Bakari, whose four year old son also attends Fortinata Pre-School.

Providing new materials and buildings is just one part of the IRC’s education programme in Nyarugusu Camp. The IRC also works to create safe learning spaces for children, especially girls, by training refugee educators and parent-teacher associations as part of its Healing Classrooms education method. This method is designed to improve the classrooms environment by focussing on student and teacher wellbeing and the learning needs of displaced children.

The IRC is supporting children in Nyarugusu refugee camp to access quality education, with funding from ECHO under the EU Children of Peace initiative. The EU Children of Peace initiative aims to support humanitarian projects for children in conflict-affected regions, providing them with access to schools where they can learn in a safe environment