Breaking down barriers through the power of sports

On a sunny Thursday afternoon in Berlin, the sound of children’s laughter reached to the rafters at Tempelhof, the historic former airport of West Berlin.

They had gathered there for an afternoon of play to mark the official launch of Berlin Kickt, a unique partnership between the International Rescue Committee, Nike and the organization, buntkicktgut – cross cultural street football leagues. The project brings the unifying power of play and the universal language of soccer to children, including recently arrived refugees in primary schools across Berlin.

There are approximately 15,000 refugee children in Berlin. When they arrive, settling into a new community can be challenging. Playing sports can help to break down barriers and form lasting friendships and connections. Through Berlin Kickt, coaches, who mostly have a refugee or migration background themselves, run weekly sessions and activities in five schools for boys and girls from all backgrounds and walks of life. Kids can play, learn, interact with one another and realize their potential in a safe and secure environment. 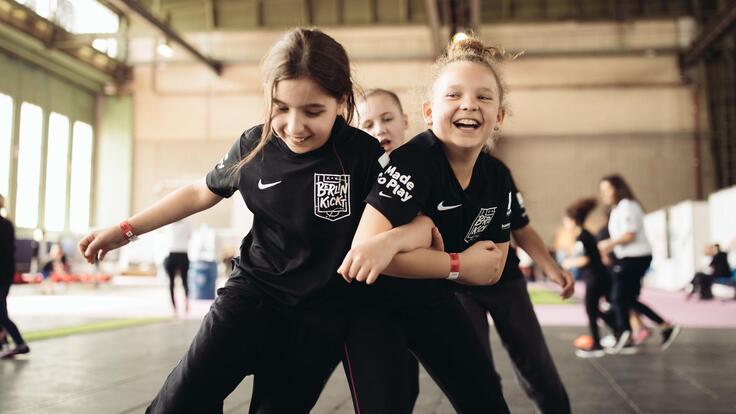 The IRC, Nike and a local organization buntkicktgut launched “Berlin Kickt,” a football and education programme aimed at bringing together local and refugee children. 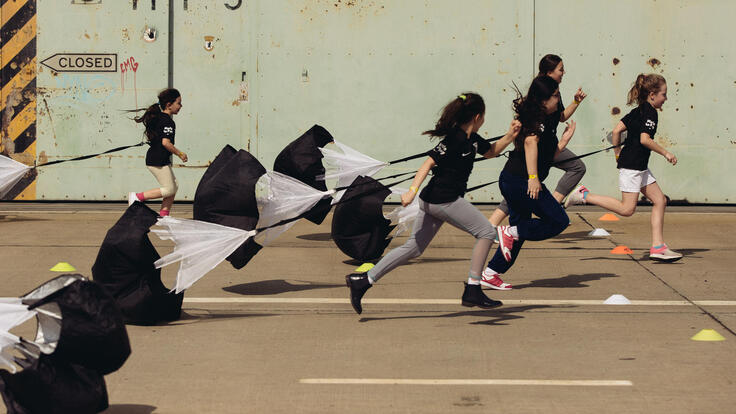 Refugee and local children played football and basketball and took part in yoga sessions and parachute races during the launch event at Tempelhof, the historic but now closed airport. 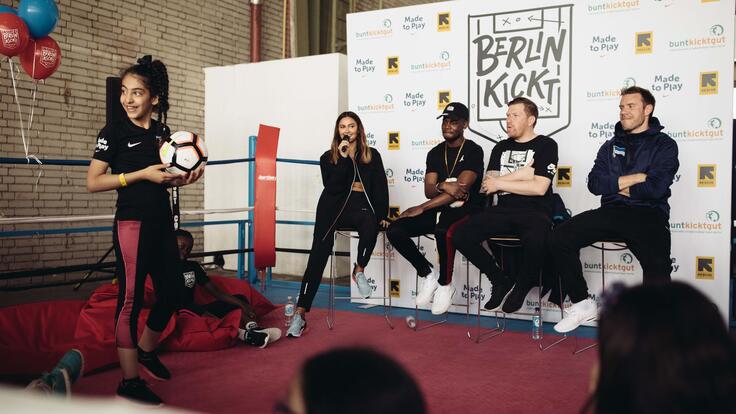 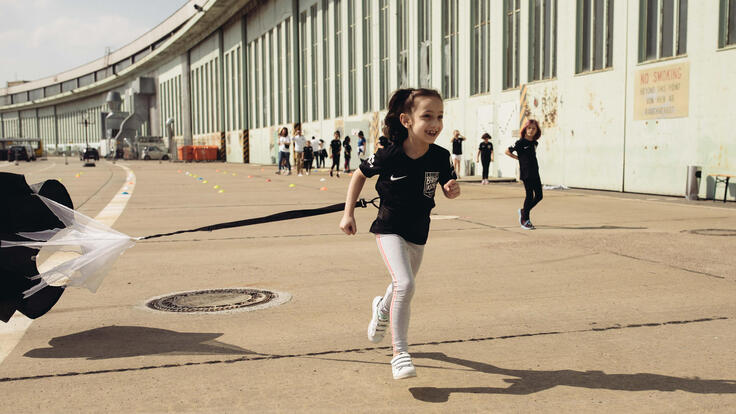 “Children are the future of our society,” said footballer Andreas “Zecke” Neuendorf. “We should take responsibility to help everybody get equal chances and support them to follow their dreams.” 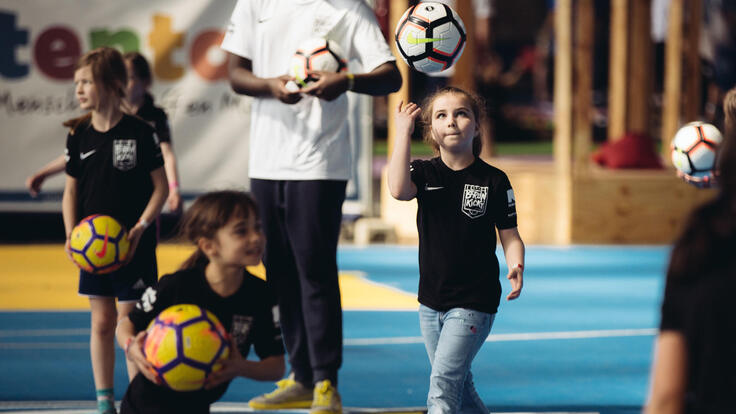 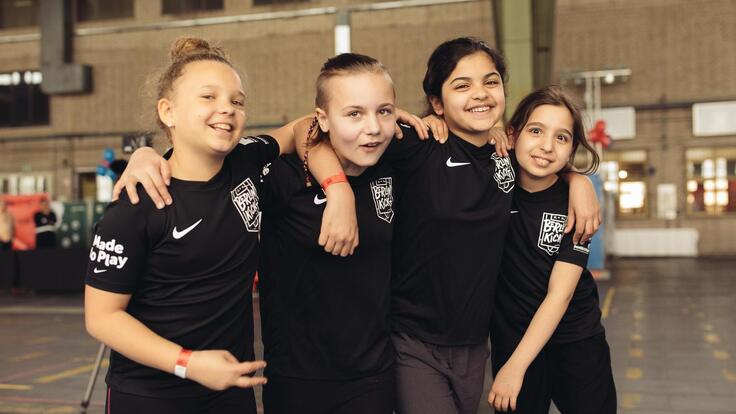 Berlin hosts 15,000 refugee children who have fled from war-torn countries like Syria, Iraq and Afghanistan. Parents have risked everything to build better lives for themselves and their children. 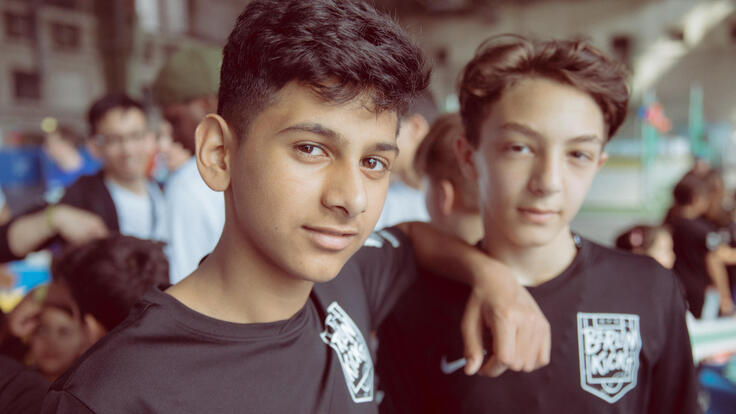 Many refugee children need to recover from the trauma they experienced in their home countries, and often from the grueling and dangerous journeys they have endured in search of safety. The IRC and Nike believe playing sports can help children overcome challenges and form connections and lasting friendships. 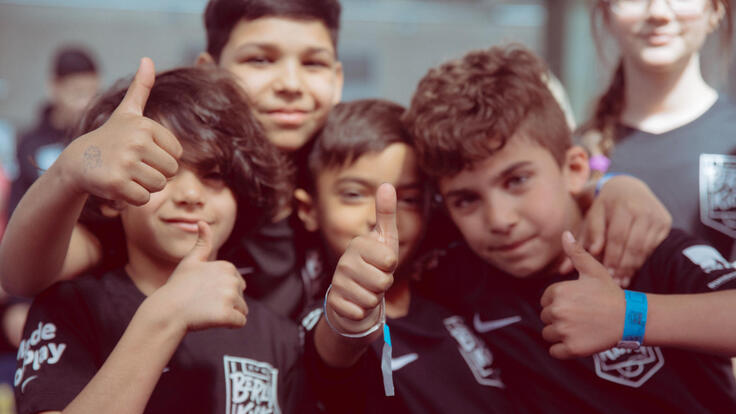 Refugee children in Germany also benefit from the IRC’s Healing Classrooms programme, which provides teachers with the skills they need to help young refugees recover from the effects of “toxic stress,” a biological response to prolonged and severe adversity that disrupts a child’s brain development.

“This is where the value of physical activity, passionate and dedicated teachers combined with healing classroom concepts in schools contributes to a safe and positive environment for children,” said Stefan Lehmeier, IRC deputy country director in Germany.

Many of these children have seen far more in their young lives than anyone ought to in a life time. Through Berlin Kickt, they also benefit from the IRC’s healing classrooms, which provide teachers with the skills they need to help young refugees recover from the effects of toxic stress on their developing brains. Toxic stress affects kids who have experienced trauma in all its forms including conflict, and can impact their ability to learn.

The partnership’s launch saw refugee children and children from the local community getting active. From yoga to soccer, from hoops to parachute races, they mingled with local sport legends including the former Germany football player and current Hertha BSC youth coach, Andreas "Zecke" Neuendorf.

“Children are the future of our society,” he explained. “We should take responsibility to help everybody get equal chances and support them to follow their dreams.”

Stefan Lehmeier, Deputy Country Director of IRC Germany observes: “This is where the value of physical activity, passionate and dedicated teachers combined with healing classroom concepts in schools contributes to a safe and positive environment for children. And, it goes a long way to ensure their successful integration into their local communities.”

buntkicktgut brings experience in organizing cross cultural street soccer leagues across Germany, Switzerland and Togo. Berlin Kickt coaches are experienced as street football work coaches in the cross cultural context of buntkicktgut’s street football leagues. “This partnership is enormously valuable as it has a direct impact on the kids,” said Konrad Locher, local head of buntkicktgut Berlin. “They are not only doing sports here but are the center of attention.”

One of the schools taking part in the project is Löwenzahn Primary School in Neukölln. Principal Utta Kioschis explained the partnership challenges children in a positive way. “This is something very special for the kids because it takes them out of their usual environment.”

Dan Burrows, Senior Director of Community Impact at Nike noted that Berlin Kickt matches Nike’s philosophy that kids are made to play, even if they don’t all get the chance.  “Research shows that active kids do better in every way – they’re healthier, happier and more likely to succeed in school. But In Berlin, fewer than one in three kids is getting the recommended amount of physical activity – and recently arrived migrants face even more barriers to play. Berlin Kickt gives every kid a chance to realize their potential through play, and that’s what makes this such a powerful and important partnership. ”

Find out more about life for refugees in Europe and the IRC’s work.