Eastern Ghouta has been witnessing some of the worst brutality in Syria’s civil war, which is now entering its eighth year.

On Feb. 19, nearly 100 civilians were killed by aerial and artillery attacks—making it one of the deadliest days of the conflict and reminiscent of the terrifying fall of East Aleppo.

Since 2013, some 400,000 people have been living under siege in this armed group area outside Damascus where food, fuel, and medical supplies are running perilously low. Conditions deteriorated further following a tightening of the siege last summer. Since the fighting started to intensify in November 2017, hundreds of civilians have been killed by airstrikes, mortars and barrel bombs.

A Syrian paramedic* who works for one of the International Rescue Committee’s local partner organisations says that rescue workers and medics have been overwhelmed as the battle for control of the last major armed group stronghold near the capital has escalated.

A father of three young children, he describes what it’s like to live and work under siege in Eastern Ghouta:

I was called to rescue a seven-year-old child who had been playing on the balcony of his house. He came across a bomb—which exploded. His body was a heap of flesh without bones.

Inside the ambulance, I am like a machine. I don’t feel, I don’t think, I only work. It’s tough. I can get a call at any moment so I can never really rest.

I work day and night shifts; a shift is 12 hours long. On normal days, I treat six to ten patients. When there is shelling, I get up to 50 patients in one day.

Recently, there has been daily bombardment.

We have a number of ambulances. Most of the time, three or four are not working, either due to regular maintenance work or because of the attacks, which happen on a regular basis. The diesel is very expensive—one litre costs $8.

All ambulances are short of critical medical supplies. We have the basics such as blood pressure machines, thermometres, stretchers and first aid materials like bandages. But often, the material is of bad quality. Because of the siege, we only have local resources. We hope to also get oxygen flow and defibrillators that can help us save the lives of patients while we transfer them to hospitals.

In all of Eastern Ghouta, there are only 95 doctors – one per 4,200 people - and 392 registered nurses and midwives. Recently, around 700 people have been trained by the doctors through IRC-supported partner organisations to work as support paramedics and nurses in the hospitals. 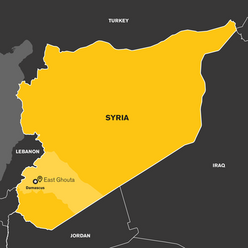 But that still isn’t enough.

People with chronic diseases lack medical supervision. My neighbour, for example, has diabetes. He lost his vision two months ago due to the lack of insulin. Patients with asthma are also unable to get proper treatment and medicine.

I move from one hospital to another in my daily work, so I know that the stock of medicine is almost gone. Some hospitals are using expired medicine to treat patients. I am worried about the coming days and how we will be able to manage our life.

One meal a day

Everything has changed since the siege in Eastern Ghouta started. The air raids have made the daily suffering worse.

The high price of food is our biggest problem now, especially over the past six months. Before the siege, people in Eastern Ghouta lived off of agriculture and had enough vegetables and fruits. Now, children are starving. Many things are not available anymore, or too expensive, like fruit, meat and chicken.

I was called to rescue a seven-year-old child who had been playing on the balcony of his house. He came across a bomb—which exploded. His body was a heap of flesh without bones.

Two pounds of bread cost over $2 now, which most people can’t afford, that’s twenty times what it costs elsewhere in Syria. The only vegetables available are corn and eggplant. Wheat is not available, so people eat barley instead. Milk for children is very expensive too, a litre of milk costs over $1. This year, the majority of children are suffering from anaemia.

My family usually only has one main meal per day. We don’t have a choice in what we eat; we have to eat what is available. Last night, my family had eggs for dinner.

The people in Eastern Ghouta are mentally affected by the situation. Most children have seen loved ones killed, injured or disappear. This will affect their future and the way they see life. Some young people are thinking about suicide, and older people are suffering from depression. Nobody is happy.

People don’t celebrate birthdays now, even if they can afford it—out of respect for other families who either cannot afford it or recently lost a family member in the attacks.

My family and I are living in constant stress and depression. Every day, I pray and hope the conflict will end. Sometimes I wish I could move away from Eastern Ghouta and live outside Syria. I really can’t imagine a good future here right now. My dream is to see my city free, without siege.

In Eastern Ghouta, the International Rescue Committee supports this paramedic's ambulance service, as well as five primary health and reproductive health clinics, including a secondary health clinic and another that provides trauma care. As part of our humanitarian operations, the IRC also covers basic operating costs, medicines and medical supplies.

Learn more about our work across Syria.