“As a father, I can say that what is happening in Yemen really hits my heart”

Yemen is facing one of the largest humanitarian crises of our time as the possibility of famine looms for millions. Two years of relentless conflict have claimed the lives of more than 7,600 people and forced millions from their homes.

International Rescue Committee aid worker Zvidzai Maburutse, originally from Zimbabwe and based in Yemen's capital city of Sana’a, writes about the heavy toll the war has taken on the entire country, and on the humanitarian agencies struggling to reach those who desperately need lifesaving assistance.

As a father of three girls, what is happening in Yemen, with children brought up in a violent situation, really hits my heart. The airstrikes, the killings—it all becomes normal and everyday life for them. What kind of generation are we creating and what does the future hold for them? It’s not very bright.

Parents in Yemen want to create a home for their children where they can grow and have opportunity, but they are no longer in a position to give them that opportunity and their kids don’t see themselves as having a future either. It’s a very dangerous state. 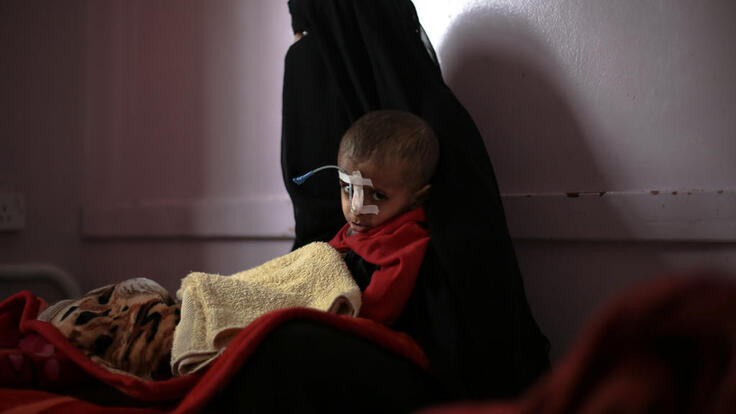 Young Essa, who is being treated for malnutrition, sits with his mother.
Photo: Rawan Shaif/IRC

Decades of poverty and poor governance have caused immense human suffering. Yemen has always struggled with severe malnutrition, especially among children, but the current conflict between the government and rebels has really exacerbated an already severe humanitarian crisis.

Nearly 19 million people are in need of critical and urgent assistance and more than two million people have fled their homes. Half of the country is hungry, as it relies on imports for 90 percent of its food, including staples like wheat and rice.

It is extremely difficult to move inside the country as aid workers trying to deliver critical humanitarian assistance to a very vulnerable population has been limited, and, at times, nearly impossible because of the security situation.

The main airport in the capital, Sana’a, only allows for humanitarian flights through the United Nations. There are no direct flights from the north of the country to the south, making the delivery of food, medicine and other critical supplies incredibly difficult.

If we want to deliver food, medicine and other critical supplies from the north to the south, we have to fly to Djibouti in Africa and then fly back into Yemen to the city of Aden in the south. It can take up to three to six months to deliver these critical supplies to people. We are forced to wait. In the meantime, with every 10 minutes that tick by, a child under the age of five dies of preventable causes.

If aid workers want to take the road from Sana’a to Aden, it takes up to a day-and-a-half with many checkpoints. It’s actually a very dangerous option, so the IRC does not use this method of transportation. It’s a horrible situation for a country that’s completely dependent on food imports for its survival. 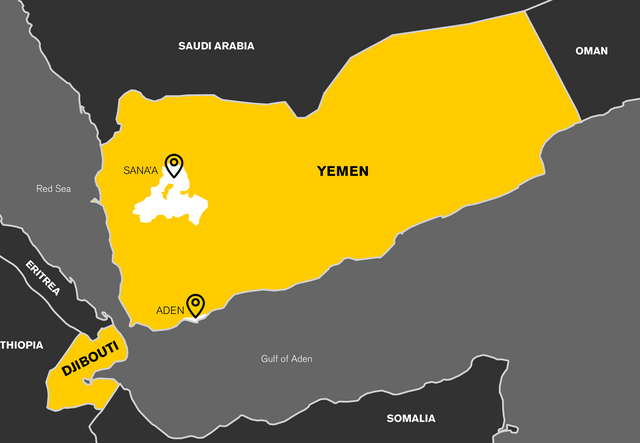 It’s extremely frustrating when you know you can help people and save their lives, but you’re limited in where you can go and how you can get there.

Children and pregnant women are the most vulnerable group as well as displaced people and the communities hosting them. Yemeni people support each other with food, but there comes a limit to that support because those helping the displaced go hungry as well.

I often think of what I witnessed at a paediatric clinic in Aden. Parents brought in their emaciated young child and were asked why they waited so long to bring the child for treatment. They said they wanted to bring him in earlier, but it took them an entire month to get the money for the bus fare to travel to the clinic.

To address these impediments, the IRC deploys mobile health clinics to reach those who unable to get to a hospital or clinic for treatment. But again, the movement for aid workers is very limited. It’s extremely dangerous in the south where each day we face the threat of insurgent groups.

The world cannot turn its back on Yemen. For two years, much of the world has ignored what is happening in Yemen and its long-term devastating consequences.

My biggest fear is that this conflict turns into another Syria. Yemeni people tell me each day that they are afraid the conflict will escalate. They worry about survival—it’s heartbreaking.

There has actually been a 20 percent increase in the number of people who are in dire need of food and other humanitarian assistance. It shows that the situation is getting worse and worse and will continue to get worse without a political action.

My biggest fear is that this conflict turns into another Syria ... [People] worry about survival—it’s heartbreaking.

But it’s not too late for peace: Yemen can be saved. The conflict is not widespread; there are pockets where things are still functioning and there is room for things to quickly turn around.

World leaders are meeting in Geneva this week to pledge their support for humanitarian aid in Yemen—but what Yemenis need most is their pledge to find a peaceful way to end two years of devastating conflict.

How the IRC is saving lives from famine

In South Sudan, Somalia, Nigeria and Yemen, the International Rescue Committee is responding with nutrition stabilisation centres and mobile health clinics to reach the most vulnerable; and providing water and sanitation support and safety protection. Learn more about how we save lives.

A version of this article was published on Newsweek