Firewood is essential to day-to-day life in Tongo refugee camp, Ethiopia. But for women and girls living in the camp, collecting it can be dangerous.

Many who have to go out on these vital journeys are subject to rape and violence.

21-year-old Hafiza is on a mission to end this brutality and put a stop to other risks women face like genital mutilation, domestic violence and forced marriage.

Hafiza has spent the majority of her life in refugee camps. Her mother was pregnant when they were forced to flee South Sudan and gave birth to Hafiza before she made it to Ethiopia. The journey there was challenging with harsh weather and no food. Her entry into the world led to Hafiza’s community nicknaming her ‘gorgor’, after a type of plant: “I was the plant for my mother to sustain her life, I was like the food she was taking.”

Hafiza and her family returned to Sudan when she was 10 and she remembers her time there fondly: “I’ll always remember my house there – it was like a farm with cows, sheep, goats and a donkey. I had a great time with my friends and I was also a good student.” 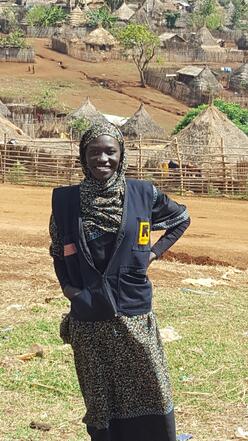 But three years later, her family had to leave their home in Sudan and flee to Tongo camp in Ethiopia when the fighting started again. Hafiza hasn’t let these tough circumstances stop her from achieving her goals.

Her ambition permeates through every aspect of her life – she is one of the few refugee women in Tongo to make it to tenth grade, equivalent to year 11 in the UK. And there’s nothing that drives her determination more than ending violence against women and girls.

She now spends her days working as an IRC social worker and campaigning on women’s rights. She’s flourished in her role listening to survivors and connecting them to life-saving services. 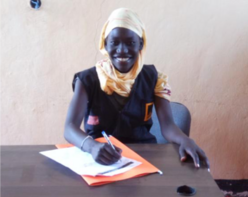 Hafiza has flourished in her role as a social worker

Life for women and girls in Tongo refugee camp, like for many women around the world affected by crisis, can mean facing discrimination and violence that threaten their lives and rob them of their potential.

For those who are able to work, their money is too often taken by their husbands, stripping them of their independence. And poverty in the camp means that families find it difficult to provide food for their children, which can lead to sexual exploitation and early marriage for girls and young women.

Hafiza told us: “I teach the community to fight violence against women and girls – to change bad behaviours to good behaviours. And I say to other women and social workers, do not be silent! Keeping silent will increase cases and the community should speak up. We also need the government to work on law enforcement as the perpetrators need to be punished.” Hafiza’s community describe her outspoken nature as remarkable in a space where men often speak on behalf of women. 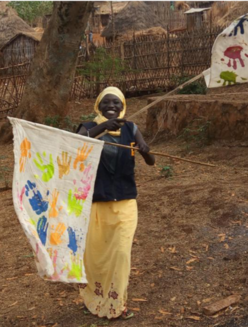 Hafiza has seen first-hand the devastating impacts of violence: “It means that women are not able to work. It affects their health with injuries, unwanted pregnancy, difficulty in labour from genital mutilation. There is also psychological impacts, women I work with face stigma, discrimination and hatred. Sometimes they feel shame and guilt about what they’ve been through.”

Hafiza isn’t afraid to have difficult conversations to drive change: “With the cultural norms and values we have in the community, there are members that refuse to listen to what we teach them – some might even pick up a stick to beat us. This is challenging, but I know that I have to keep teaching them until they learn to respect women’s and girls’ rights.”

One day, Hafiza hopes to return to Sudan – but wherever she goes, she says she’ll be waving the flag for women and girls.

“I am shining, and the community can see my light – this will help women to live a safer and more secure life here in Tongo Camp.”

In partnership with the European Commission's Humanitarian aid and Civil Protection department (ECHO), the IRC was able to respond to the needs of women and girls in Ethiopia.