Men speak out on violence against women in Chad 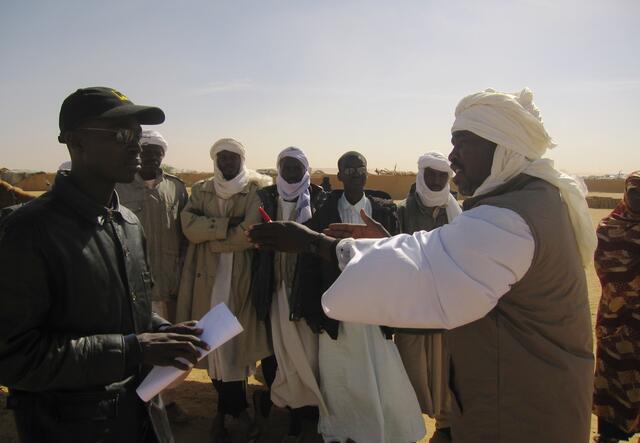 Guest blogger Brenna O’Rourke is an IRC intern in Chad, where the IRC is providing healthcare and other essential services to 58,000 Darfuri refugees in two camps, and to local communities who support them. When women and girls flee a crisis such as the conflict in Darfur, Sudan, the threat of assault follows them. They can also face early marriage, domestic violence, genital mutilation or harassment.  Our work in Chad includes urgent care for survivors of sexual violence. We also reach out to men and boys to change attitudes that foster violence against women.

In December 2009, Sudanese refugee Hassan Mahamat Nour closed his popular shop in Ouré Cassoni camp for several days. He forfeited valuable income for his large family. But he felt it was essential to take part in the 16 Days of Activism Against Gender Violence and support women in the camp in eastern Chad. Hassan explained to me: “My shop is a means to earn money for my family.  But, for me, working to defend the rights of women and girls is more important than my shop.” Hassan himself has two wives and several daughters.  “All men in this camp were born from women and theyall have wives and daughters,” he said.  “If girls here can move away from early and forced marriage, they can continue their studies, they have every opportunity to become capable women and be well-placed in society.”

In August 2009, Hassan joined the IRC’s Gender-based Violence (GBV) team as a community volunteer to raise awareness of the harmful effects of violence against women.  He is now one of three men who are fighting GBV within the camp by organising trainings and campaigns. Hassan admits that, before he personally attended an IRC training, he didn’t recognise the negative consequences of violence against women and girls.  Now he says:  “My wife asked me why I often come to the women’s center. It’s because women suffer in their lives, especially women in this camp due to the behavior of our parents and men.  So I come to the women’s center to help the IRC change behavior.” The essential role of men in the fight against gender violence is often overlooked.  However, in a community like Ouré Cassoni where women’s voices are often silenced, it is men who will be heard. Prominent community leader Abdallah Deyé Narh told me: “The fight against GBV must involve men, for in most cases it is men who are the perpetrators of violence against women and girls. Men are capable of starting to reduce the rate of GBV themselves.” Abdallah is a voluntary literacy teacher at one of the IRC women’s centers in the camp.  He said he volunteers to “give my contribution to my sisters, mothers, and daughters.” “I want to see all women refugees in Ouré Cassoni be happy despite the war that continues at home,” Abdallah said.  “Men must understand that the consequences of GBV are very harmful and that the solution is found between the hands of a man.”