Raising awareness of violence against women in Kenya

Andrew Kusimba, father of two and community leader in Kitale, an agricultural town in western Kenya, recently took part in a groundbreaking workshop organised by the International Rescue Committee in partnership with local organisation Rural Women Peacelink. The event, part of the Peace Initiative Kenya project, aims to engage “champion” men who will raise awareness about violence against women and girls and promote equality in their communities, as well as challenge stereotypes of men and women.

Andrew found the workshop extremely useful. “I learned that men stand to gain from a violence-free environment,” he says. “It challenged and inspired me to believe in myself as a man who can be a part of the solution to ending violence against women in my community, rather than be a perpetrator.” 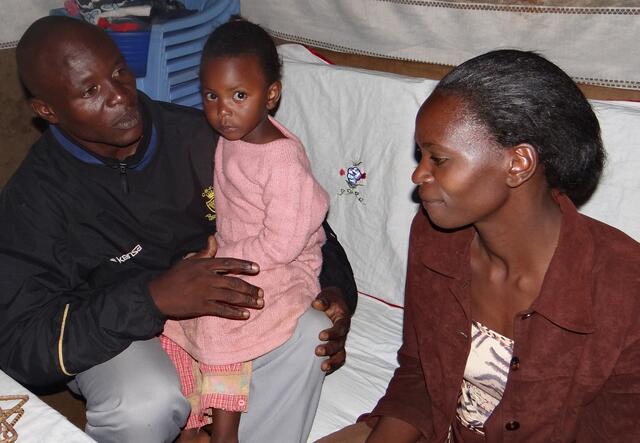 Andrew is well known in Kitale and, as a kick boxer and martial-arts trainer, has a unique perspective on violence in his community. “Some of the survivors of violence are my students, so I need to empower myself on how to take part in ending this cycle. I also wanted to be informed on how to help survivors.”

A recovery centre located in Kitale records two to three cases of rape every day. “Other types of gender-based violence that are relatively common are sexual assault, domestic violence and physical abuse,” says Andrew. “Incest, child abuse and child neglect are common among younger children in my community.”

Andrew and his wife, Joy are proud parents of 17-year-old Walter and two-year-old Malaika. “I don’t get to spend as much time with my son as I would like because he is in a boarding school in a different county pursuing his secondary education,” says Andrew.  “I pay him visits during parents’ day, held once a trimester, to check on his well-being and studies. But I spend quality time with him when he comes home for school breaks.”

Aware of how quickly children grow up, Andrew spends as much time with Malaika as he can. “My daughter is in ‘baby class,’” he explains. “Whenever I’m not traveling for kick-boxing tournaments, Malaika insists that I take her to school in the morning. In the evening, when I come home from work, she often tells me what they’re taught and sings to me some of the songs they learn.”

He already has big dreams for Malaika. “My hope is that she successfully completes her education up to the university level and becomes successful in whatever career she desires. Once she has achieved this, she then can start a family of her own.”

Since the workshop, Andrew has been actively raising awareness about violence against women and girls in his community. “Once I’m done with my martial-arts training sessions, I take about 20 minutes to engage my students, who include prison wardens, police officers, school teachers and social workers, in a GBV talk,” he says, using the acronym for gender-based violence. “We discuss what gender-based violence is, the types of GBV, how to help a victim of violence, where to report cases of gender violence.”

His wife and extended family support his outreach efforts. “They are proud of me for taking an interest in issues affecting the community, especially women and girls,” he says. “My wife told me that the next time a similar workshop takes place in our county, I should tell her in advance so that she can alert her friends, who can tell their husbands to attend.”

This Father’s Day will be a family affair for the Kusimbas. “My wife, daughter and I plan to attend morning service at our local church, as is our norm,” says Andrew. “Afterwards, we will visit the Kitale Museum to learn about Kenya’s history.”

His message to fellow fathers—especially fathers of girls—is simple but powerful: “I encourage all fathers to show affection toward their children and not impose fear on them or violate their rights.”