What is gender-based violence – and how do we prevent it?

Each year on 25 November, the International Day for the Elimination of Violence against Women kicks off 16 days of activism against gender-based violence.

Gender-based violence (GBV) is present in every society around the world and takes many forms. As a violation of human rights, we have a moral imperative to stop all forms of violence against women and girls. In crisis, whether conflict or natural disaster, the risk of GBV increases, and so – therefore – does our collective need to act to prevent GBV before it happens or respond to the needs of women and girls when it does.

The IRC has been working specifically to prevent and respond to GBV since 1996, meaning we have over 25 years of experience.

Women and girls are disproportionately impacted by all forms of gender-based violence. Below, we consider why this happens, and what we can do to prevent it.

What is gender-based violence?

Gender-based violence (GBV) is an umbrella term for harmful acts of abuse perpetrated against a person’s will and rooted in a system of unequal power between women and men. This is true for both conflict-affected and non-conflict settings.

The UN defines violence against women as, ‘any act of gender-based violence that results in, or is likely to result in, physical, sexual or psychological harm or suffering to women, including threats of such acts, coercion or arbitrary deprivation of liberty, whether occurring in public or in private life.’

Over one-third of women and girls globally will experience some form of violence in their lifetime. However, this rate is higher in emergencies, conflict, and crisis, where vulnerability and risks are increased and most often family, community, and legal protections have broken down

Harm caused by GBV comes in a variety of visible and invisible forms—it also includes the threat of violence.

GBV can manifest in a large variety of ways. Some of these include: physical violence, such as assault or slavery; emotional or psychological violence, such as verbal abuse or confinement; sexual abuse, including rape; harmful practices, like child marriage and female genital mutilation; socio-economic violence, which includes denial of resources; and sexual harassment, exploitation and abuse. 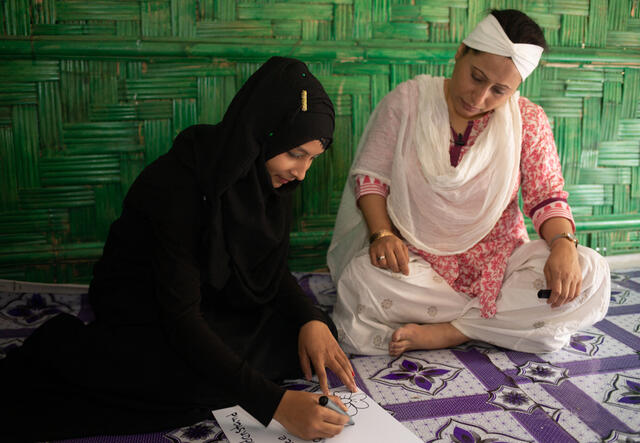 Nur Jahan, 15 years old, attends a women's centre run by Razia Sultana who helps to empower Rohingya women and enable them to understand their rights. She works tirelessly to ensure that the crimes against the Rohingya by the Myanmar military - particularly rape against thousands of women - are brought to justice.
Photo: Habiba Nowrose

What is Intimate Partner Violence (IPV)?

Intimate Partner Violence (IPV), or ‘domestic violence’ is an all-too-common form of violence against women and girls. It refers to any behaviour from a current or previous partner that causes harm—including physical aggression, sexual coercion, psychological abuse and controlling behaviours.

Globally, the UN reports that one in four women have been subjected to physical and/or sexual violence by an intimate partner at least once in their lifetime, and IRC research has shown that it is the most common form of violence against women and girls in humanitarian contexts.

Who is most at risk?

Gender-based violence can happen to anyone. However, it disproportionately affects women and girls. Those in crisis settings are at a double disadvantage due to their gender and their situation.

Women and girls from other diverse and marginalised communities face an even greater risk where gender inequality combines with other forms of oppression.

Those at higher risk include:

Research found that adolescent girls are particularly at risk of being overlooked in emergency settings, where they may fall between the cracks of child protection services and those aimed at adult women. 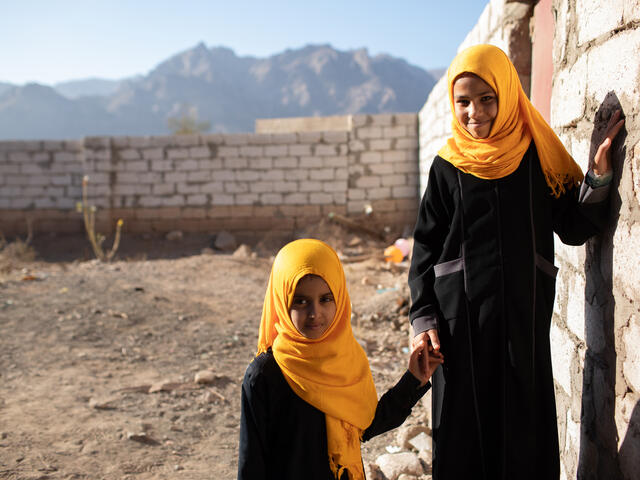 Young Yemeni girls participate in the Girl Shine program. Girl Shine has been designed to help contribute to the improved prevention of and response to violence against adolescent girls in humanitarian settings.
Photo: Will Swanson

Whether due to conflict or a natural disaster, women and girls living through humanitarian crises see an increase in the frequency and brutality of GBV.

In recent analysis by the IRC, 73% of women living in some of the most forgotten crisis settings reported an increase in domestic violence, 51% cited sexual violence, and 32% have seen an uptick in child and forced marriage since the start of the pandemic.

Afghanistan, for example, has faced decades of war, chronic poverty, and natural disasters—and women and children are increasingly bearing the brunt of the resulting violence.

Women and children in Afghanistan make up around half of all civilian casualties.
Photo: Photo: Stefanie Glinski/IRC

This is in large part because the same conditions that contribute to conflict and forced displacement also accelerate GBV. These include:

Research from What Works found that when families are pushed into poverty, harmful practices like child marriages increase. Young girls may be pulled out of education for marriage, or to help with domestic tasks, or generating an income. Unemployment and economic distress in the household can increase instances of IPV, as well.

A collapse of community structure and the rule of law means women can find themselves without social support and protection systems in violent situations. It can also result in women and girls travelling great distances in search of food, water or fuel, further increasing risk of sexual assault.

Rising numbers of conflicts globally are driving an increase in conflict-related sexual violence (CRSV). Without the rule of law, CRSV is often carried out with impunity. Armed forces may use rape as a weapon of war. Other forms of CRSV include sexual slavery, forced prostitution, forced pregnancy, forced abortion, enforced sterilisation, forced marriage and other forms of sexual violence.

Women living in refugee camps and other temporary accommodation can face safety issues that put them at greater risk. This can include having no locks on bathroom doors, joint male and female facilities, and inadequate lighting.

Women living as refugees may have to find new livelihoods, which can lead to an increased risk of servitude and exploitation.

Lastly, displaced women and girls in emergencies are often less visible. They’re not always included in national surveys or reports, which means their needs go unmet.

Violence has a long lasting effect on survivors and their families. Impacts can range from physical harm to long-term emotional distress to fatalities. Rape and sexual assault can result in unwanted pregnancies, complications during pregnancy and birth, and STIs, including HIV.

Social and economic fallout from GBV can lead to a loss of livelihood and increased gender inequalities in the long term. Reporting or seeking services for GBV can lead to further threats of violence, social stigma, and ostracisation. GBV is also a key barrier to women and girls accessing other lifesaving services, such as food, shelter and healthcare.

Crises are not short-term occurrences. Climate-related disasters can create recurrent crises and many women and girls who are forcibly displaced can end up living in temporary accommodation for years.

This exposes women and girls to GBV and CRSV for longer, and can draw out and compound the effects of that violence for decades, hampering long-term resilience and empowerment. 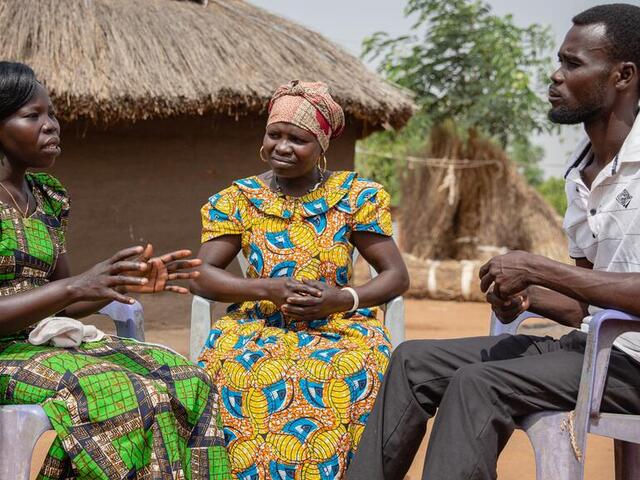 Despite the serious and at times fatal effects of GBV, it is still not prioritised with enough urgency during humanitarian responses. In 2021, just 28% of GBV funding requirements were met, the lowest proportion reported over the previous four years, and down from 32% in 2020.

Our ​​5 ways to help end violence against women and girls feature outlines several steps those in power can take to help end GBV in crisis settings, including:

Comprehensive GBV services need to be established quickly in times of crisis to protect women and girls and reduce their exposure to violence, while increasing their chances of recovery and resilience.

Humanitarian organisations should bring a feminist approach to programming, that takes into account the unequal power balance between genders when designing support and interventions for crisis-affected populations. 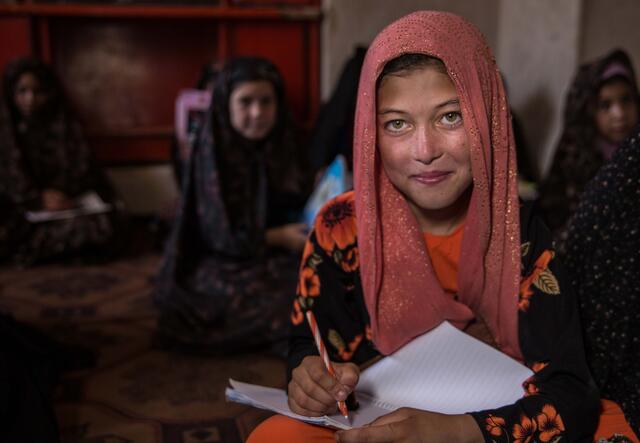 The IRC prioritises the needs of women and girls across its programming. We work to support the resilience and dignity of women and girls exposed to violence in crisis settings over 45 countries worldwide. In 2021, we trained nearly 16,000 individuals on GBV response.

The IRC delivers essential healthcare, GBV case management and psychosocial support to survivors, including through safe spaces and outreach teams.

Donate now to support our work.