The first 100 days: How President Biden can support refugees and asylum seekers

Any president assuming office in the midst of a global pandemic would be facing a staggering challenge.

President Joe Biden is also beginning his term after four years of an administration that wreaked havoc on the lives of refugees, asylum seekers and other marginalised communities, as well as failed to lead on global crises ranging from COVID-19 to protracted conflicts to climate change.

The Biden Administration has the ability to turn all of this around and began the process on the President's first day in office with a new legislative proposal on immigration and executive orders on the Trump Administration’s 2017 travel ban and Deferred Action for Childhood Arrivals (DACA), a programme for undocumented immigrants brought to the U.S. as children.

Here are seven executive orders and other concrete actions the administration can take—and, in some cases, has already committed to—within its first 100 days.

Refugee resettlement under the Trump Administration consisted of a race to the bottom, with arrivals declining by nearly 85% and hitting record lows nearly every year.

As a candidate, President Biden committed to restoring the U.S.’s refugee resettlement programme, which has historically enjoyed bipartisan support, by admitting 125,000 refugees in his first year in office. 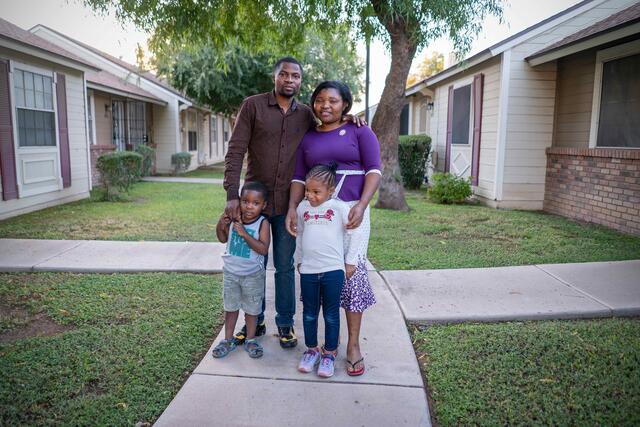 Robert and his wife, Esther and their two young children were resettled by the International Rescue Committee in Phoenix, Arizona after escaping war in the Democratic Republic of Congo and living in a refugee camp in Uganda for 20 years.
Photo: Andrew Oberstadt/IRC

Each year, the president sets the annual refugee admissions goal through a process called the presidential determination. Just as President Trump slashed this number each year, President Biden can raise it to respond to the urgent global need, to offer hope to the world’s most vulnerable--and to ensure America lives up to its highest ideals.

The IRC is eager to work alongside the new administration, communities across the country and both Republican and Democratic leadership to rebuild this bipartisan, lifesaving programme.

Seeking asylum is legal--even during a pandemic. Asylum seekers cross the U.S. border because they are fleeing violence and persecution.

The Trump Administration’s inhumane policies have left behind a broken asylum system. Americans were horrified to see thousands of children separated from their parents. People seeking safety have been turned back to dangerous conditions. And, most recently, the administration used COVID-19 as an excuse to close the border altogether—without giving asylum seekers the chance to request sanctuary.

Through bold action in his first 100 days, President Biden can end the current crisis at the border and build a safe, orderly and fair process for asylum seekers. 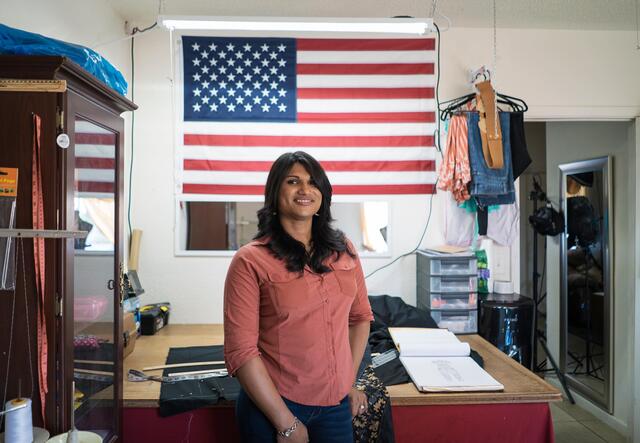 Lincy, a transgender woman from Honduras, sought asylum in the U.S. after facing abuse, violence and persecution in her home country. Now, living in Phoenix, Arizona she has found her passion as a fashion designer.
Photo: Andrew Oberstadt/IRC

One priority is issuing an Executive Order to reverse a policy called the Migrant Protection Protocols (MPP) or “Remain in Mexico.” Under MPP, asylum seekers make their claim in front of a U.S. border official, then are sent right back to Mexico to wait for their case to be heard by an immigration judge in the U.S. Though local communities have made valiant efforts to welcome turned-away asylum seekers, resources are stretched thin and already-vulnerable families are finding themselves in danger of kidnapping and assault.

Of course, any actions the Biden Administration takes will be in the context of a global pandemic. To build a process that is both fair and safe, the administration must also send humanitarian assistance to the border, including COVID-19 testing resources and personal protective equipment (PPE).

Finally, to solve the crisis for the long term, the administration should address the root causes of displacement from Central America and open up more pathways to safety—including refugee resettlement—for people facing crises.

COVID-19 has brought the world to its knees. When it comes to ending the pandemic, no solution will return us to normality—not even a vaccine—unless the response prioritises the world’s most vulnerable countries.

Humanitarian aid will be critical to this approach; the IRC is urging the administration to allocate $20 billion to combatting the virus abroad. We are also urging a global approach when it comes to one of the world’s most hopeful developments: the vaccine. 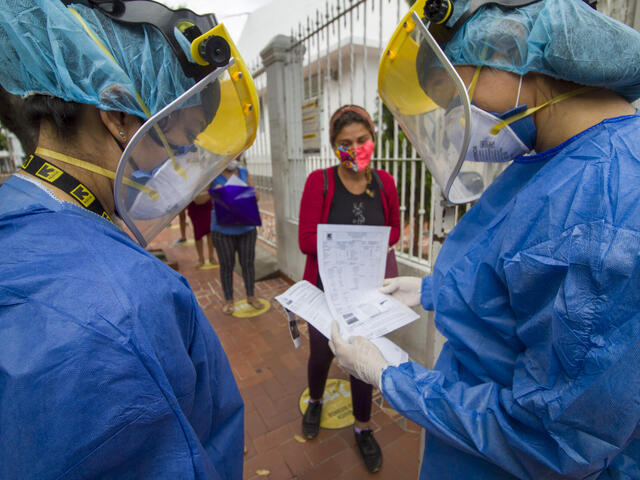 COVID-19 is deepening the world's most serious humanitarian crises, including the one in Venezuela. The IRC and our partners are providing health care and other vital support to vulnerable Venezuelan families.
Photo: Mendoza/IRC

If all vaccines are approved, the U.S. has advance-purchased far more COVID-19 vaccine doses than are needed to fully immunise its eligible population---three times the amount, in fact. The Biden Administration should commit to sharing these excess doses, which could fully immunise 235 million people, for life-saving use through an international effort called the COVAX Facility.  Made up of governments and manufacturers, the COVAX Facility was created to ensure the vaccine would reach low-income countries and the people in greatest need.

The same policy of prioritising the most vulnerable applies at home as well. To be successful, President Biden’s COVID-19 domestic response must reach refugees, immigrants and other marginalised populations in the U.S.

4. Rejoin the Paris Climate Accord and the World Health Organisation

In 2019, more than half the countries most vulnerable to climate change were also experiencing humanitarian crises. On top of causing extreme weather events, a warming planet exacerbates ongoing emergencies such as conflict, hunger and forced displacement.

The cost of not addressing climate change is far too high for the U.S. to sit on the sidelines. That's why the IRC applauds the Biden Administration for recommitting the U.S. to the Paris Climate Agreement. 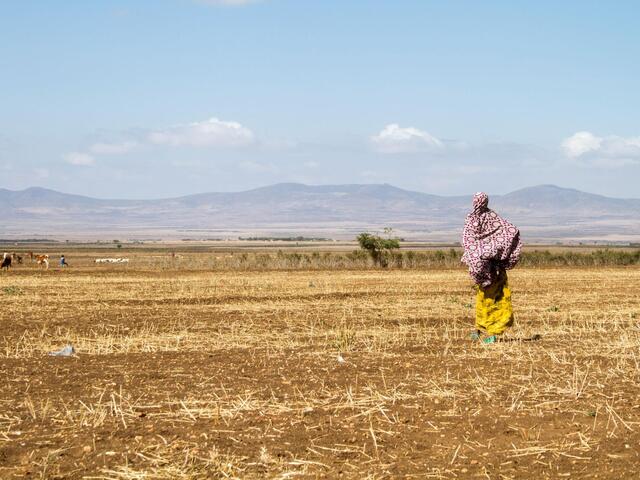 When it comes to global leadership, the administration should also be commended for reviving the U.S.’s longstanding commitment to the World Health Organisation, after the Trump Administration withdrew American participation. American leadership is needed to negotiate critical changes, such as humanitarian exceptions to COVID-19 travel restrictions—93 percent of humanitarians have reported impacts on their work—and the implementation of an urgent global ceasefire to halt attacks on civilians and civilian infrastructure, including health facilities.

Yemen has topped the IRC’s “Emergency Watchlist” for the third year in a row, a consequence of five years of war and a humanitarian response on the brink of collapse. With the fallout of the COVID-19 pandemic exacerbating Yemen’s already crisis levels of hunger, the World Food Programme has warned that the country could face famine in 2021.

Despite the urgent need, the United States and other large donors have withheld humanitarian pledges and funding. The U.S. in particular has partially suspended funding for lifesaving assistance in the areas controlled by Ansar Allah—the de facto state authorities controlling land that is home to 80% of Yemen’s population—since March 2020, as well as designated Ansar Allah a Foreign Terrorist Organisation (FTO) and Specially Designated Global Terrorist (SDGT) entity.

The IRC knows all too well from our voices on the ground the deplorable tactics used by all sides in the conduct of this war. However, these policies will not end these transgressions; instead, they threaten to make effective and efficient delivery of much-needed humanitarian aid all but impossible. The Biden Administration can make a dramatic difference by reversing this aid suspension as well as the terrorist designation of Ansar Allah. 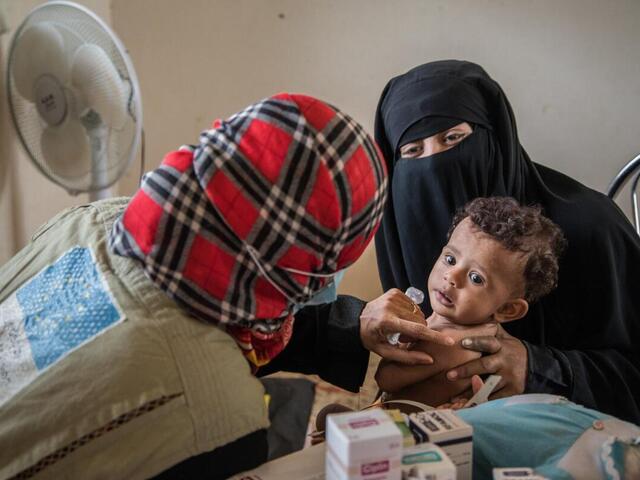 All sides of the war in Yemen have repeatedly flouted international law. Homes, hospitals, bridges and other critical civilian infrastructure are regularly damaged or destroyed by fighting; only half of the country’s medical facilities are still fully functional.

There is no military end to this crisis. The Biden Administration can do its part to bring about peace by halting arms sales to those who fail to protect civilians from harm.

One of the Trump Administration’s first acts in office was its travel ban targeting people from Muslim-majority countries. The impacts were swift; refugees who had completed the exhaustive approval process and families who had prepared for months to reunite with loved ones suddenly saw America’s doors closed to them. Americans of all walks of life were appalled, and thousands gathered at airports to protest.

Though the ban has since been through many iterations and multiple court cases, it continues to needlessly keep families separated and unable to find a safe haven in the U.S. The IRC applauds the Biden Administration for reversing this unnecessary and discriminatory policy on day one. 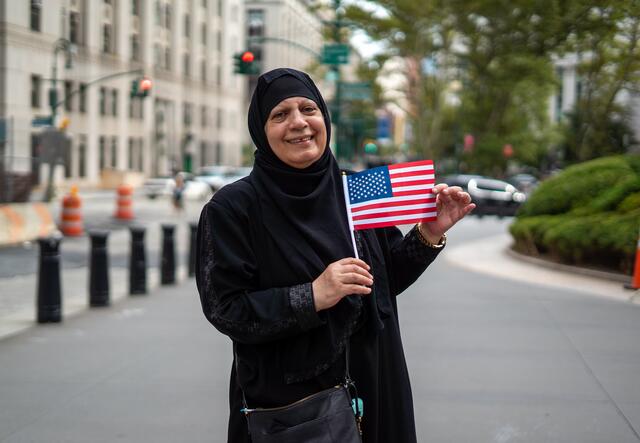 “My husband applied and was given permission—he had begun to prepare himself to come here.” Maha, an Iraqi refugee and mother of five, studied hard for her U.S. citizenship. It’s been six years since she resettled in Queens, NY, and her family still remains divided. “Then suddenly, they said to him, ‘you are refused."
Photo: Andrew Oberstadt/IRC

The Deferred Action for Childhood Arrivals (“DACA”) programme, introduced in 2012, created a fair and necessary safeguard for hundreds of thousands of young people brought to the U.S. as children (a group sometimes referred to as “Dreamers”). Over 800,000 young people have benefited from the program.

DACA came into the crosshairs of the Trump Administration early on, as officials questioned its legality and attempted to end it all together. Even though the Supreme Court ordered the administration to resume DACA for the time being, court challenges from the program's opponents continue to loom. 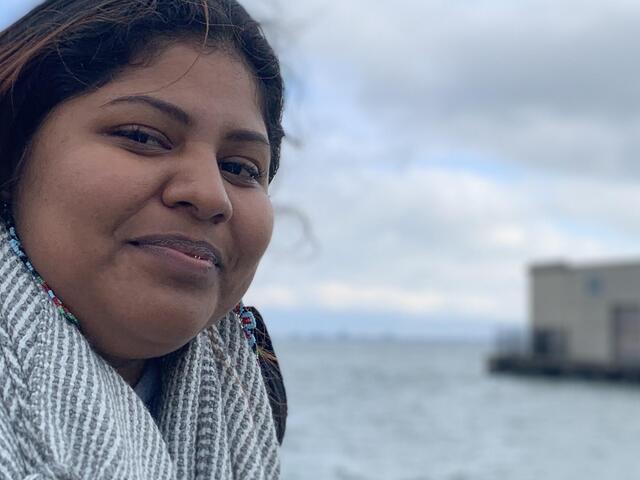 “I have to prepare for my future, but I have to be aware that my plans for my future may not happen,” said Lupe, a DACA recipient and youth leader originally from Mexico who spoke to the IRC earlier this year.

The Biden Administration took concrete action on day one to preserve and fortify protections for “Dreamers.” Now, it is up to Congress to act, by passing a permanent solution so that these young people no longer have to worry about being separated from their families or from their homes.