Horrific attacks in cities like Orlando and Paris have sparked a dangerous backlash against refugees in Europe and the United States — particularly against Syrians, 13 million of whom have been uprooted by nearly five years of terror at home.

Some elected officials in the United States — citing unfounded fears that terrorists may infiltrate the refugee resettlement programme — are calling for a halt to the arrival of Syrians and other people escaping war or trying to restrict funding for refugee assistance.

The U.S. has committed to welcoming 10,000 Syrian refugees in 2016. This is not nearly enough to rescue those most at risk. Here are four myths that drive such misguided efforts and threaten the safety of refugees: 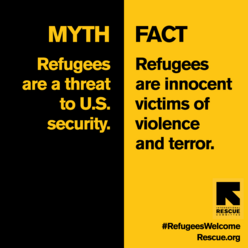 Myth: Refugees are a threat to U.S. security.

Fact: Refugees are innocent victims of violence and terror.

Refugees are not dangerous. In fact, far from being terrorists, Syrian refugees have been living with terror every day — including at the hands of ISIS.

Refugees are people just like us who have been forced to flee their homes and seek safety in another country, often times without warning. The U.S. resettlement programme gives priority to refugees, usually vulnerable families, who have been targeted by violence. The U.S. does not recognise as refugees people who have committed violations of humanitarian and human rights law.

Since the start of the U.S. refugee resettlement programme some four decades ago, no refugee has been arrested on domestic terrorism charges.

Meet Wajed Al Khlifa, who fled her home in Homs, Syria, with her young family after her brother was tortured and other close relatives killed. She now lives in Turlock, Calif.

Fact: The hardest way to come to the U.S. is as a refugee.

Refugees are vetted more intensively than any other group seeking to enter the U.S. All those seeking to come here must first be registered by the United Nations refugee agency, which identifies the families most in need. The U.S. then hand-selects every person who is admitted. Security screenings are intense and led by U.S. government authorities, including the FBI, the Department of Homeland Security, the Department of Defence, and multiple security agencies. The process typically takes up to 18 months and is followed by further security checks after refugees arrive in the states.

“There are many ways to come to the United States,” says David Miliband, president of the International Rescue Committee, which has resettled more than 160,000 refugees from 50 countries over the past 40 years. “Comparatively, the refugee resettlement programme is the most difficult, short of swimming the Atlantic.”

By contrast, the screening of people arriving in Europe by the thousands each day has been far less rigorous. The borders of European Union countries are porous, and Greece — whose islands are a stepping stone to the continent for most of these refugees — is struggling without adequate support from the EU and the international community to properly register and assist new arrivals.

Meet Rama Saleh, from Aleppo, Syria. It took two years of screening before the U.S. admitted the 19 year old and her family. She now lives in Miami, Fla. 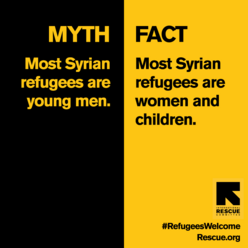 Fact: Most Syrian refugees are women and children.

Fears that most Syrian refugees are young men who support terrorism are unfounded. Many of the refugees arriving in Europe right now are young men who don’t want to be forced to fight in Syria’s civil war, or Syrian fathers trying to forge a safe path for their families to join them later. However, more than half of all refugees worldwide are women and children. And most of the Syrian refugees resettled in the U.S. are women and children.

Meet the Rawas family, who escaped Syria in 2012 as their Damascus suburb was pounded by gun battles and bombings. They now live in Oakland, Calif.

Myth: Refugees are a burden on society.

The U.S. has a long tradition of offering refuge to those fleeing war and persecution. And these new Americans repay the nation’s generosity, becoming taxpayers, homeowners, entrepreneurial employers, valued employees, and even public servants.

“New immigrants bring new energies and have the ability to revitalise our communities and our economies,” says Ruben Chandrasekar, director of the IRC office in Baltimore, Md.

Refugees receive limited cash support from the U.S. government for the first few months after they arrive, along with services from partner agencies like the IRC that help them acclimate to their new communities. They are encouraged to find work quickly and stand on their own feet — and most do. Refugees even pay back the loans they take for their plane tickets here.

The U.S. has resettled approximately 1,800 Syrians since Syria’s war began but, as history has shown, has the capacity to welcome far more. In the late 1970s and early ’80s, the U.S. was resettling over 150,000 refugees from Southeast Asia annually.

Meet Adote and Tele Akwei, who faced death threats in their native Togo before coming to the U.S. 10 years ago. They recently purchased a home in Baltimore.

This story originally appeared in the IRC's "Uprooted" publication on Medium.

Stand with refugees and choose humanity. Add your voice.