Five months ago, 14-year-old Anita and her two younger brothers woke to the rattle of gunfire as rebels attacked their village in a remote region in eastern Democratic Republic of Congo.

The children ran outside as armed men began to burn down village huts, losing track of their parents in the chaos but managing to escape into the forest. There, they found safety with Congo’s indigenous people, who offered the siblings food and directed them to the nearest stream for water. 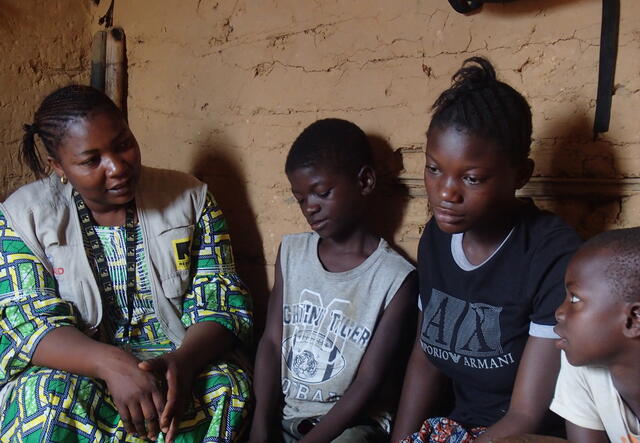 An IRC aid worker speaks to 14-year-old Anita and her two younger brothers Franck, left, and Freddy whose parents were killed by rebels in eastern Democratic Republic of Congo.
Photo: Wassy Kambale/IRC

Then they walked for five days, heading toward Cantine, a town associated with the gold trade, meeting others from their village along the way. One of those the children met, 43-year-old Feza, became their caregiver. For the rebels had killed their parents.

“Every night, I dream of my mother’s spirit coming back to us,” Anita says tearfully.

“I still have nightmares of the war, of people who kill others,” says her brother, 13-year-old Freddy.

As for 11-year-old Franck, he has recurring dreams of his father. “My dad is buying us shirts, pants and shoes,” he says.

Stopping the cycle of violence

Eastern Congo remains one of the most volatile areas in Africa. More than five million people have been killed here since 1996, making this conflict one of the world’s longest and bloodiest. Yet it is all but forgotten. Children like Anita and her brothers, caught in the crossfire, struggle to cope with loss and trauma, but suffering goes largely undocumented. The local authorities simply haven’t the means or training to care for grieving children.

The International Rescue Committee and its partners are working with the villagers in Cantine, which has welcomed more than 5,000 displaced Congolese since October 2015, to provide counselling and a safe space for children to recover from their emotional wounds. 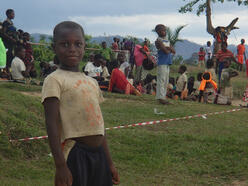 The IRC has trained local volunteers to help identify children like Anita and her brothers who are suffering from nightmares, or who are withdrawn or unable to concentrate. With the support of the community, we also are airing messages on the radio educating parents and other caregivers on the role they play in ensuring their children’s well-being.

“We realised that if these children are not supported psychologically, they risk reproducing what they experienced in the future,” explains Assumani, a volunteer trained by the IRC.

An opportunity to bond and heal

Children who have lost parents are particularly vulnerable. Feza admits that she finds it difficult to give Anita and her brothers the psychological support they need. Her priority is to find them food. The children yearn to return to the classroom, but funds for reintegrating displaced children in the local school system have been cut back.

“Our grandfather wanted to put us in school here, but he too died of illness a few weeks ago.” Anita says, refering to a member of her tribe. “In our village, we went to school, but here we go no more, we have no money.” 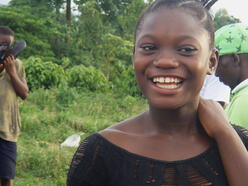 At an IRC-run children's safe space, Anita is learning how to knit and enjoys making new friends.
Photo: Wassy Kambale/iRC

IRC aid workers in Cantine have set up a child-friendly space that offers an opportunity for children to play, learn and regain confidence in a nurturing enviornment. The children are very enthusiastic, participating in literacy classes in the morning and then choosing between sports, music or art in the afternoon. The younger ones sit under a tarp and play with dolls, some for the first time.

As the children learn and play, an IRC counsellor observes them for signs of distress—who is playing alone, who is abnormally quiet, who is violent—and provides counselling and other specialised support to those at risk.

For Anita and her brothers, the space has provided an opportunity to heal and form bonds with other children. Anita is learning to knit; Freddy and Franck have joined a soccer team.

“These children have changed a lot,” says Feza, smiling. “They play a lot more easily with other kids in the village, thanks to the IRC and the volunteers.”