The Syrian war, now entering its ninth year, has forced nearly six million people to flee their country. More than 650,000 of them have headed south to neighbouring Jordan—most of them women and children.

Life as a refugee, especially for girls, is tough. They are marginalised, abused and denied educational opportunities. But rather than have them recount these hardships, the International Rescue Committee, during a series of interviews, asked Syrian girls living in Jordan to share their dreams, ambitions, abilities… and their favourite things.

Every morning over breakfast, sisters Aya and Ala’a share what they dreamed the night before. Sometimes, they dream about their home in Syria.

'I remember the house, the neighbourhood, the games we were playing with the neighbours,' said Ala’a. 'We had a big house, with two big beautiful bedrooms for myself and my sisters. We each had our own bed. But now we don’t have these things.'

Aya and Ala’a’s family fled Dara’a in 2012 after a car exploded next to their house, just 200 metres away. When they packed up to leave, the sisters were allowed to take one thing with them. Ala’a took Mimi, a stuffed animal her mother gave to her nine years ago for her third birthday. Aya chose a book she wrote and illustrated herself, A Journey to the Valley.

'The pictures are valleys and mountains from Syria,' Aya explains. 'Drawing helps me express myself and I reflect my ideas and thoughts on paper.' Here's an excerpt from her story:

"I saw the flowers in the mountain and the scene was beautiful. Trees were wearing a green dress. Father collected firewood and made fire, and mother prepared food for us. We ate the food and played football. We went back and were very happy.”

Ala’a wishes that girls like her will be able to live a happy life. 'Follow your hopes and dreams—don’t let anything stop you.'

'And always be the best!' adds Aya. 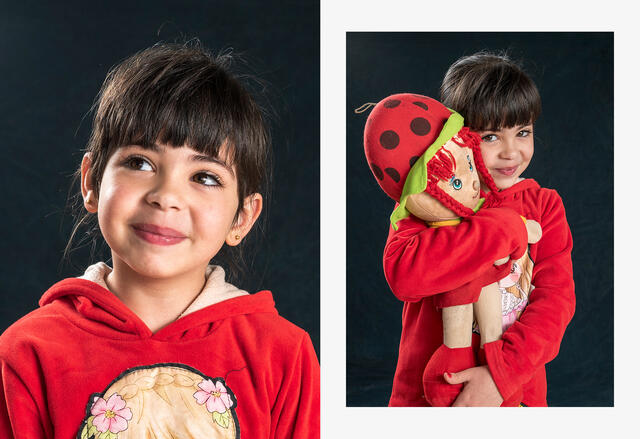 Lelas came to Jordan when she was just a year and a half old. She doesn’t remember much about Syria, but she did recall her favourite doll, Nour.

'My grandmother gave me the doll, but when we fled Syria, I left it behind,' Lelas says. 'My grandmother came from Syria and she brought Nour to me...and pyjamas!'

Lelas loves school, but she is unable to attend in Jordan because her mother can’t afford the monthly £26 fee. She frequently visits a centre run by the IRC where she can play, draw and practice her English while her mum attends sewing or Zumba classes.

'When I come to the play area in the children's room, I draw and colour and watch cartoons on TV!' Lelas says excitedly. 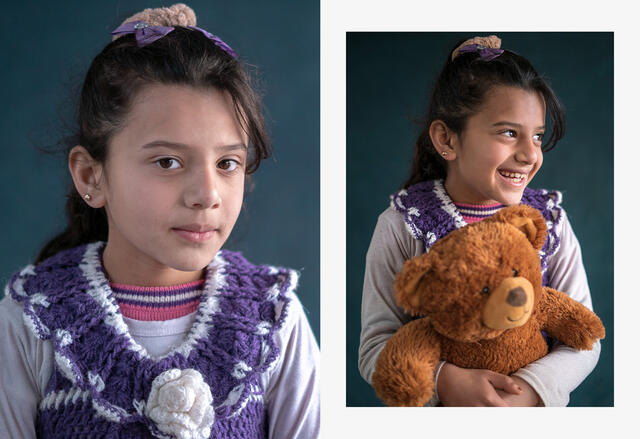 Sporting a knitted purple sweater dress made by her mum, Ala’a introduces her favourite teddy.

'His name is Shihat. I got him after I finished kindergarten! I took a music course [where] I played the piano and guitar. I'm now in second year.'

Ala’a loves attending music classes, but English and maths are her favourite subjects. When she’s home, Ala’a calls her aunt and grandmother in Syria on Whatsapp, where she shares photos.

Her best friend is Shimose and they like playing a game called “Fish.” 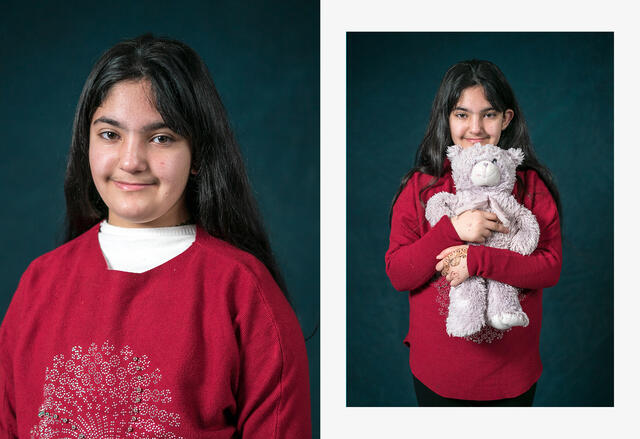 Naba’a’s mother was so terrified about losing her daughter, she would hide Naba’a under the bed or in a wardrobe to protect her from the bombs dropping outside. After one struck a neighbour’s home, killing nine, the family left for Jordan with a few clothes and Hamada, Naba’a’s cuddly teddy bear.

'He’s called Hamada because I asked him and he told me that this was his name,' says Naba’a. 'He calls me mum. We are best friends. And he makes me laugh!'

Naba’a’s father, Mansour, who passed away last year, gave the bear to Naba’a five years ago. She is in third grade and dreams of becoming a doctor. 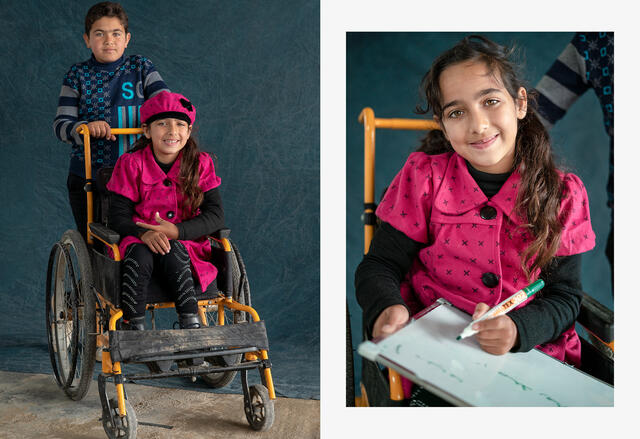 Name: Hala
Age: 9
From: Hama
Lives in: Azraq
Favorites: Writing board, and her brothers

Hala is in second grade. She loves to practice her Arabic and take music lessons, but her favourite thing is her portable whiteboard.

'My brother who is married brought it to me,' she says. Hala has six brothers. 'I love my brother. He is having a baby soon, I’m excited!'

Hala’s family left Syria four years ago. At home, she attended physiotherapy regularly for her disability, which she’s had since birth. 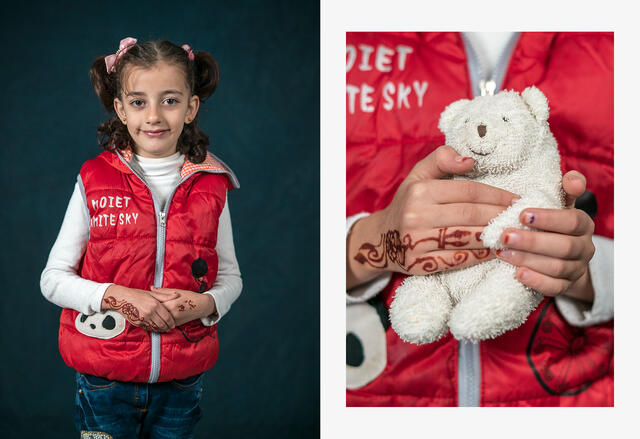 Little Aina has a long list of favourites: English, reading, playing doctors with friends, Arabic music and art. Her favourite singer is Seif Nabil, a local Iraqi singer and composer.

Her most prized possession is Panda, a stuffed animal her father gave to her when she was 3. Every time Aina meets a new person, she gives Panda a nickname in honour of them.

Aina suffers from epilepsy. She is in third grade and loves to visit the IRC centre with her mother. 'There are many children there,' she says. 'I am very happy there.'

Shaima goes everywhere with her little sister, Safa. 'Because I love her,' she says. 'We [play] with lego at home, and we swap clothes. I enjoy walking to school together.'

Shaima’s family left their home in Syria in 2014 after their house was bombed. She is now in second grade and loves studying English -- she’s proud that she can count from one to 10. 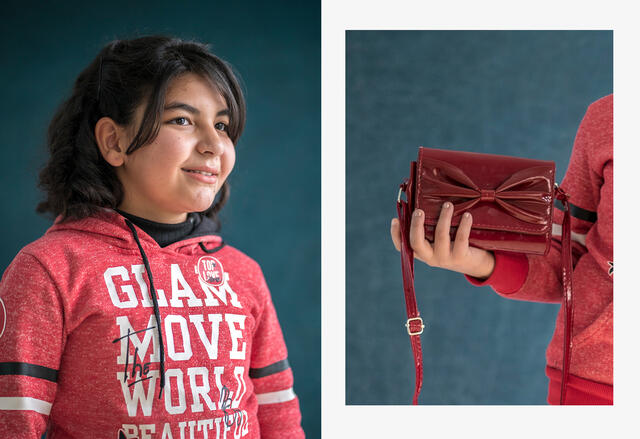 Mariam is a selfie queen. She even has her own channel on YouTube where her mum helps her upload videos of herself singing songs—she loves music and dancing. She is always carrying around her favourite purse. Mariam attends Zumba classes at the IRC centre with her mum, and she has started to take English classes. She dreams of becoming an English teacher. 'I like grammar, the words, books and exams,' she says. 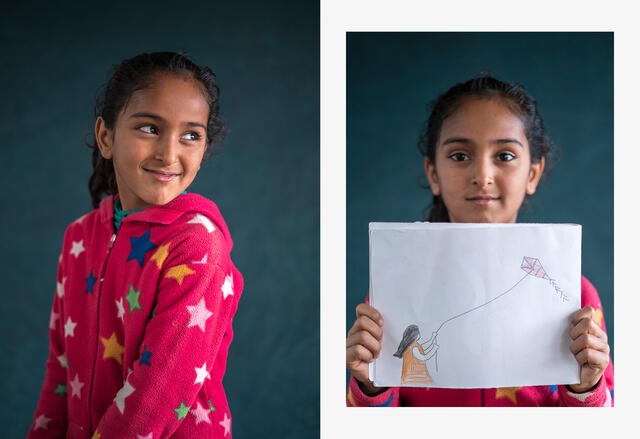 Maissa shows off her drawing of two girls flying a kite. 'It’s Asma, my sister. She’s 7. And Lemis who is 3,' she says. 'They are flying the kite my father made for us. I love drawing. My father is an artist and he [taught] me how to draw.'

Maissa’s family has been living in Azraq refugee camp since 2016, when they fled Aleppo and ISIS.

Across northern Jordan, the IRC runs eights centres in cities and Azraq refugee camp for Syrian and Jordanian women and girls that offer skills trainings, counselling, recreational activities such as Zumba, crochet and sewing, and cash relief. Every centre also provides childcare services for parents who want to give their children an opportunity to play, learn and meet other children while they attend classes. Learn more about our work.