Mandy Patinkin with Syrian refugees: There is no greater gift than the gift of welcome

The sky is a glorious blue. It is peaceful and calm. It’s hard to believe that just a few feet away, there has been terrible violence, loss and destruction.

I am standing near the southern border of Syria in Jordan where millions of refugees have crossed during the eight years of the Syrian civil war—and millions more are hoping to cross again to go home.

Jordan has welcomed over 670,000 Syrian refugees. It has been a nation of refuge for people fleeing violence in neighbouring countries since the mid-twentieth century.

My wife Kathryn and I have come to Jordan with the International Rescue Committee to share the stories of courageous and extraordinary Syrians who are overcoming trauma and hardship to carve out new lives. 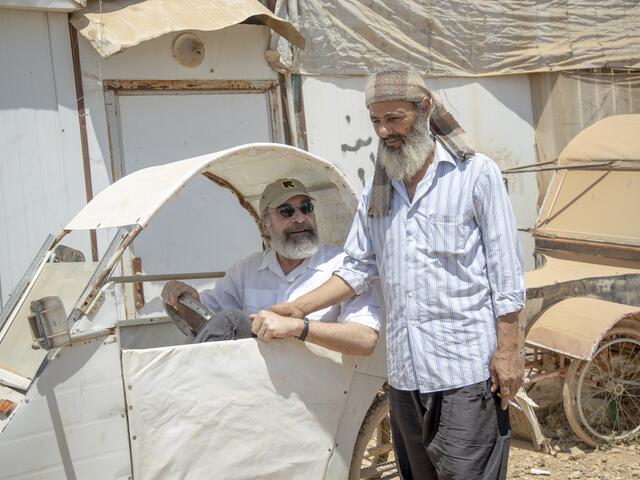 A greeting with welcome and kindness

There, I was embraced with such welcome and kindness by people like Mohammed and Yousef, even though we didn’t speak the same language. Mohammed owns a small shop in the camp where he receives 200 customers a day. He and his family have been living in Zaatari since 2013. His 13-year-old son Raed told me, “Everything was beautiful in Syria.”

His favourite subject is science, and he hopes to be an architect when he grows up. I felt moved and inspired by Raed’s resilience, and also felt frustration at how unfairly hard his path will be to get the kind of education he desires.

Yusef, an anaesthesiologist from Dara’a, Syria, now welds old bike parts and scrap metal to build new bikes—and impressive four-wheeled, pedal-powered “cars.” He reminded me of my father’s friend who made go-karts. I had no words when Yusef said: “The situation in Syria...it hurts.” 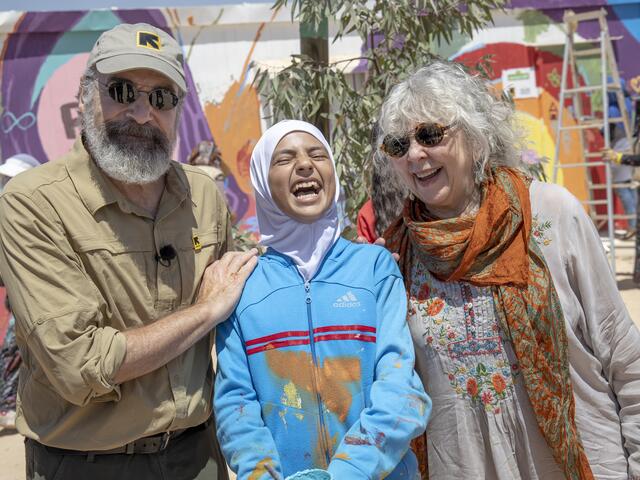 Fifteen-year-old Rayan left Syria for Azraq refugee camp in Jordan when she was 12. She loves English and writing and also enjoys filmmaking and painting.
Photo: Sandee Borgman/IRC

Refugees are my teachers

Many Syrians wish to go home one day. At Azraq camp, I met Rayan, a spunky 15-year-old who has countless interests, including writing, filmmaking, painting and martial arts. She left Syria when she was 12—and only wants to remember the goodness. “It’s a beautiful country,” she told me. “To return there will be better for my future.”

But many can’t, and it’s people like Alaa, a young father, who is a gift to uprooted families at this uncertain time. Alaa volunteers with the IRC at its parenting centre, where he helps parents coping with trauma play and learn with their children. He evokes such passion and commitment to helping his fellow Syrians. 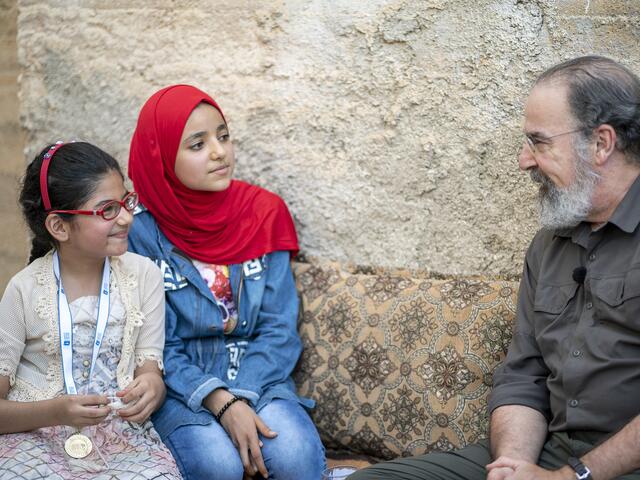 Sisters Aya, 9 and Ala’a, 13, fled Dara’a, Syria in 2012 after a car exploded next to their house. They each were allowed to take one thing with them: Ala’a took Mimi, a stuffed animal, and Aya chose a book she wrote and illustrated herself.
Photo: Andrew Oberstadt/IRC

Children who want to heal the world

While media attention has focused mainly on Jordan’s refugee camps, the vast majority of refugees have settled in Jordan’s urban areas—particularly those close to its northern border, like the cities of Irbid and Ramtha.

I was incredibly moved by sisters Aya, 9,and Ala’a, 12. They are a team. They fled from Dara’a, Syria to Irbid in 2012 after a car exploded next to their house.

Aya is a talented writer and storyteller who has won awards for her essays. She writes these beautiful stories about lessons of selflessness and caring for our fellow humans. Her older sister is her biggest fan. Both dream of becoming doctors one day to heal the world.

In Ramtha, I visited a safe space for Syrian refugee women where they come with their young children to get counselling, health care, legal services, classes, and so much more.

These centres help women and girls feel less isolated, and empower each other: survivors of violence can disclose abuse, receive confidential emotional and practical support as well as medical care and counselling. The work is incredibly moving and hopeful.

The IRC is committed to listening to the voices of women and girls in crisis to ensure our responses meet their real needs, not what we think they need. 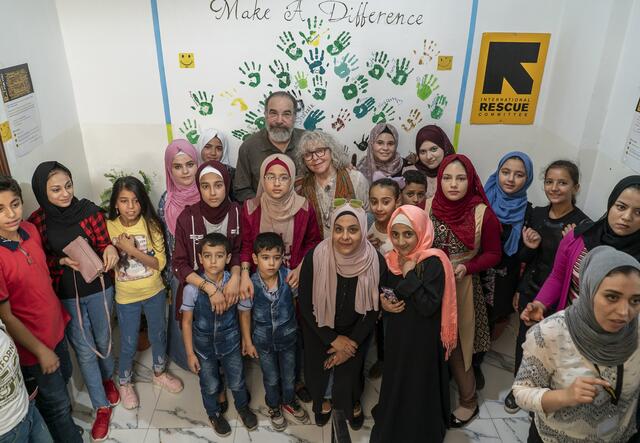 Mandy and Kathryn visit a women and girls centre in Ramtha, Jordan where the IRC provides counselling, recreational activities, healthcare and other support.
Photo: Andrew Oberstadt/IRC

Samar, 31, is from Homs and fled with her six children alone. She is a widow. Her children lost four years of schooling. She doesn’t have a regular income, so she relies on selling homemade food.

Samar received counselling from the IRC to help her cope with her past, and to understand her legal rights in Jordan when her late husband’s family wanted to take the children. She also recently lost her father.

I've never met such a strong woman who has found a new life through the support given to her by counselling and healing. The experience changed her life.

“I have to continue living because of those that love me, my children,” she said.

We must do better

What more can we say to people to make their hearts come back to life?

Today there are more mothers, fathers, sisters and brothers fleeing from war and persecution than at any time since World War II. And yet, we continue to turn our backs on human suffering.

The United States has cut the number of refugees to be admitted to the U.S. in fiscal year 2020 to 18,000. Jordan has welcomed 1,000 refugees for every one resettled in the U.S. This is absolutely unacceptable. 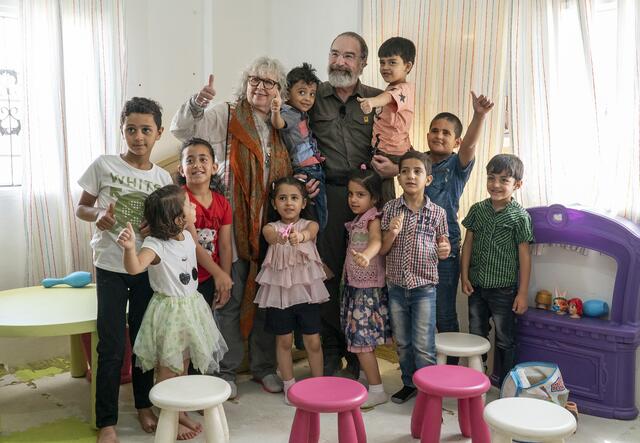 Mandy and Kathryn play with Syrian children at the women and girl's centre. The vast majority of Syrian refugees have settled in Jordan’s urban areas, particularly those close to its northern border, like the cities of Irbid and Ramtha.
Photo: Andrew Oberstadt/IRC

America said “welcome” to both my family and Kathryn’s—and that’s why we’re alive. In dark days, I think of refugees who have risked their lives to find safety, and of the difficulties they overcame. And that makes me truly feel alive.

When given the chance, refugees thrive. We are all in a privileged position to be a voice for those that have no voice. We are privileged to tell their stories. We must do better. It is a matter of life and death.

Remember the words of the man who founded the IRC: Albert Einstein. “Only a life lived for others is a life worth living.” There is no greater gift you can give to yourself, than the gift of kindness, welcome and opportunity to your neighbour.