Syrian mums share what they love most about their daughters

Mothers around the world all want the same thing for their children—safety, health and a bright future. For refugee mothers who have fled conflict, the wellbeing of their children is uncertain—but they bravely fight for it, every single day.

The International Rescue Committee, during a series of interviews, asked Syrian mothers who have sought refuge in Jordan how, in tough circumstances, they are managing to raise their daughters to be strong, hopeful and resilient young women.

I’m proud of my daughter’s character. She’s a strong-willed girl. 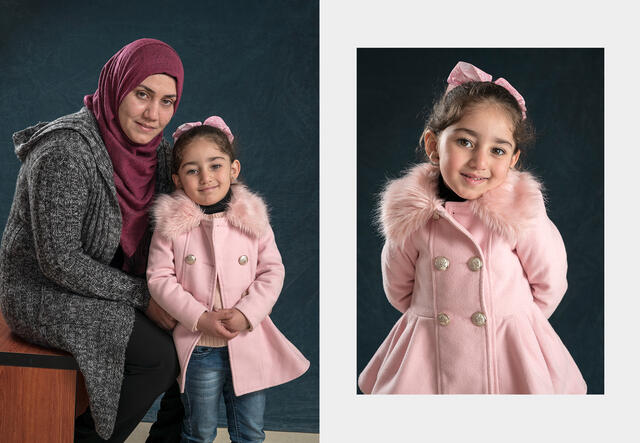 Ola fled Dara’a, Syria, in April 2013 with her three children. Taima’a is her youngest—a bright, carefree 5-year-old who loves clothes, Legos and Tom and Jerry.

“I’m proud of my daughter’s character,” Ola says. “She is a strong-willed girl. If she gets something in her head, she will do it.”

Ola wants other refugee mothers to know that strength is key to survival and wishes that all children, including her own, have the opportunity to continue their education. “This is the most important thing in order to live a good life,” she says.

Olga regularly visits an IRC centre for women and girls. There, she takes handicraft and chocolate-making classes that help her cope with life as a refugee, while Taima’a plays, draws and learns English.

My daughter is a selfie queen. 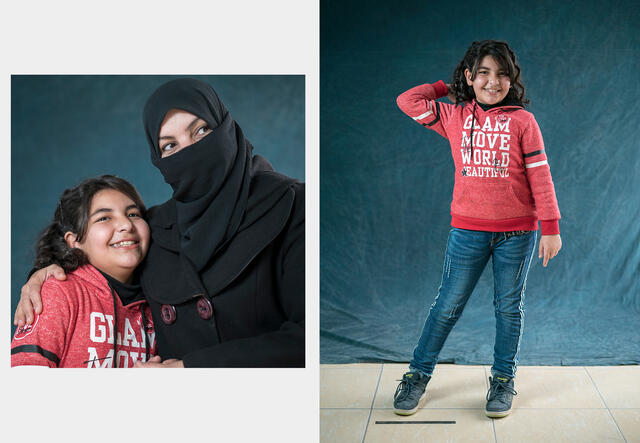 Hanadi and Mariam, her 10-year-old daughter, are best friends.

“She is beautiful with a strong personality,” says Hanadi. “She has her own YouTube where we upload children’s songs. And she loves selfies—she is a selfie queen.”

Hanadi and Mariam enjoy singing and attending Zumba classes at the IRC centre, where Hanadi also teaches sewing classes. The centre empowers her, Hanadi says, and helps her to feel independent.

I’m proud my daughter goes to school. I didn’t have this opportunity, but she does. 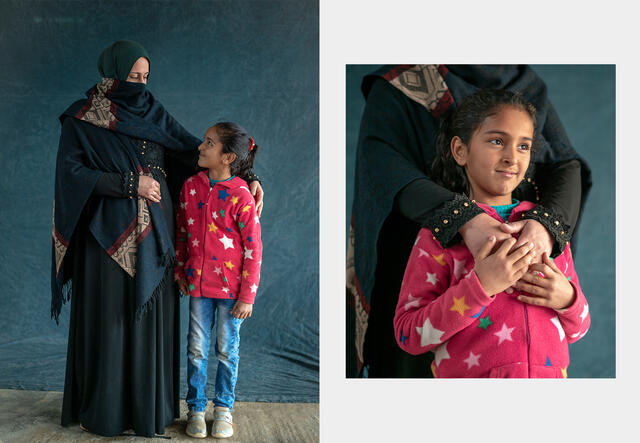 Leaving Syria was the hardest decision Nadia ever made. She lived near Aleppo under ISIS for two years before she managed to escape with her family. Nadia was pregnant with twins at the time.

“ISIS didn't let anyone leave,” she explains. “I couldn't even see a doctor, but I needed a C-section. Male doctors would get killed if they operated on women. Even female doctors were scared for their lives.”

The journey out of Aleppo was difficult and risky. Nadia, her husband and their children traveled with six other families in the back of a truck covered with hay and tarpaulins. It took a day to reach the border, but they almost didn’t make it—at one point, a bomb exploded just 600 feet from them.

Nadia has been in Jordan since 2016. She’s especially close with her 8-year-old daughter, who loves to draw and help her mum.

“Sometimes Maissa comes to me and tells me, 'I can't wait until I am older; I will do the housework and you can rest,'” says Nadia. “She always sits with her notebook and pencil, she is always drawing.”

Nadia is exceptionally proud of how well Maissa is doing at school and how quickly she’s learning. “I didn’t have this opportunity, but she does.”

My daughter is the smartest in the family. 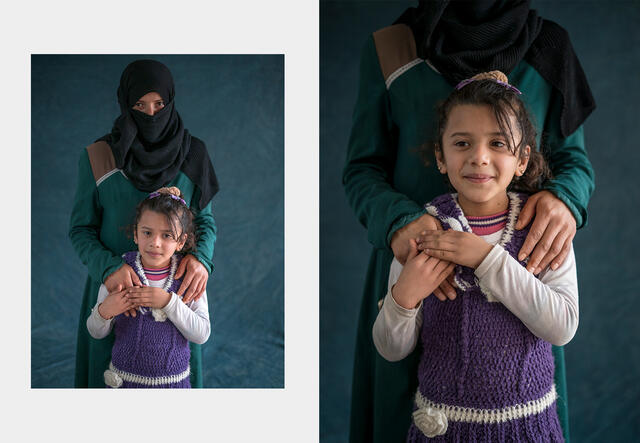 After living among bombs and fighting in Aleppo, Ibtesam is doing everything she can to ensure a bright future for her children. At the IRC centre, she took several parenting sessions to help her daughter and two sons.

Ibtesam calls eight-year-old Ala’a, "the smartest in the family."

“She is very clever and kind,” says Ibtesam. “She is very good at school.” Ibetsam enrolled Ala’a in a music course where she learned to play piano and guitar. As a reward, Ala’a was given a bear, whom she named Shihat.

“My Mama and I drink mate together,” says Ala’a, referring to a hot drink that is a tradition in Syria. “And we talk on WhatsApp with my aunt and grandmother [who remain in Syria]. My mama is very nice to me.”

Ibtesam knows her daughter loves her very much—so much that she agreed to wear the purple dress Ibtesam made for her. “She only buys pink clothes from the market!” Ibtesam says with a gleam in her eyes.

Give time to your kids, but also, give time for yourself. 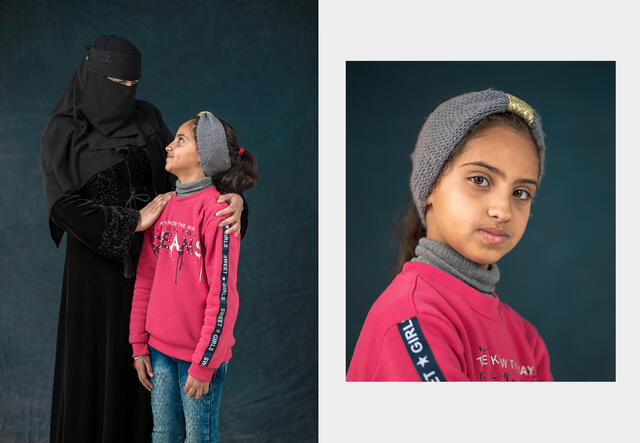 Aysha was among the first Syrians to escape the fighting in Homs in 2012. She found refuge in Jordan with her three daughters and two sons.

“You would wake up one morning and see a dead body on the street,” Aysha recalls. “Markets were closed. Schools were closed.”

Aysha and her husband divorced three years ago. She is raising her children on her own and finds them a source of strength. "Bushra wants to be a lawyer," she says.

Her advice to other mothers: always see the best in your children.

“I care about my children the most,” she says. “I want to offer them a good education. Give time to your kids, but also, take time for yourself.”

I can talk to her about anything. 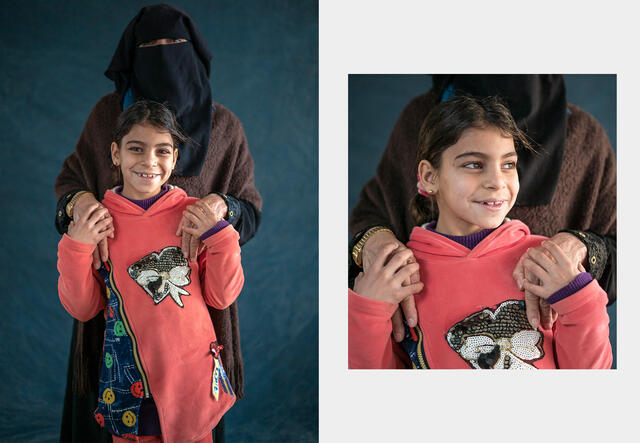 Amira and her daughter, Fatima, love talking about school and the future. They also talk about Syria and those they left behind.

“Fatima and her [siblings] miss their relatives,” Amira says. “They want to get to know the ones they never met.”

Amira has high hopes for her 7-year-old daughter, who she describes as smart and engaged. “I can talk to her about anything,” she says.

“I like when we sit together and read,” Fatima adds. “I love everything about my mum.”

I want my daughter to have a better life than I did. 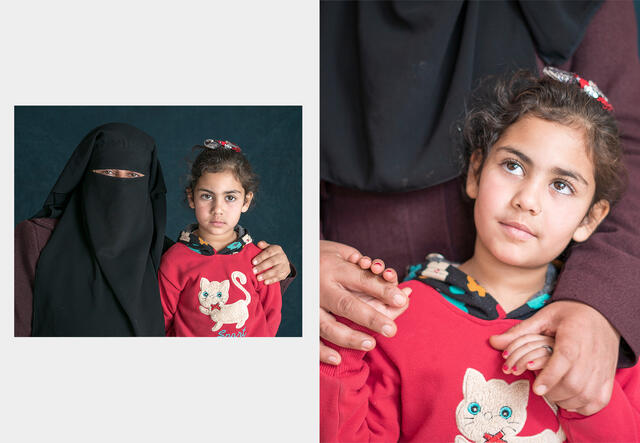 Safa was pregnant when she was forced to flee her home. “There were armed men,” she recalls. “They told families, 'We will destroy your house, you can leave or die.' Houses close to ours were bombed. People were afraid, so we decided to leave.”

“Tasneem is a beautiful, smart and clever girl,” Safa says. “But we don't have the money to send her to school. I’m hopeful my children will have a good life full of dignity. I want my daughter to have a better life than I did [as a child].”

I still have hope for my children. 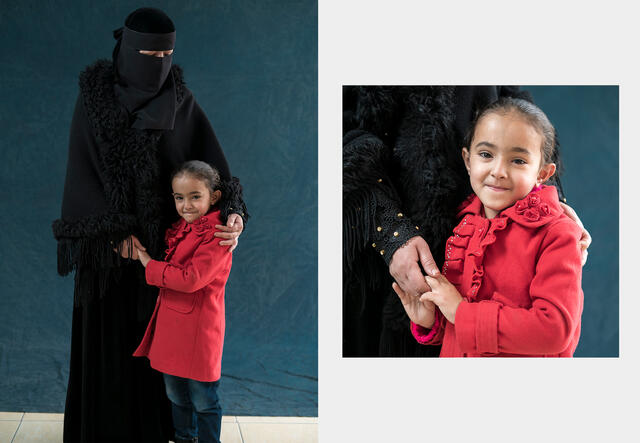 Ramia describes her youngest daughter, 6-year-old Solsobil, as beautiful, bright and talkative. “She has to comment on everything!” Ramia says.

Ramia and her family fled their home in Homs, Syria, in 2013 after their house was destroyed by a missile.

“When the shelling calmed down during the night, we fled to a small village in the countryside and we lived there for a year,” she recalls. “Then the bombing started there, but we managed to leave before our house got hit.”

The family was approved to resettle in the United States after completing the required interviews and background checks. But the Trump administration’s travel ban, which blocks citizens from seven countries, including Syria, from entering the U.S., has forced the family to remain in Jordan.

“After Trump's decision, everything is pending, everything stopped,” says Ramia. “I see my family's future [in America]. I still have hope for my children—this is what I want for them.”