History of the International Rescue Committee 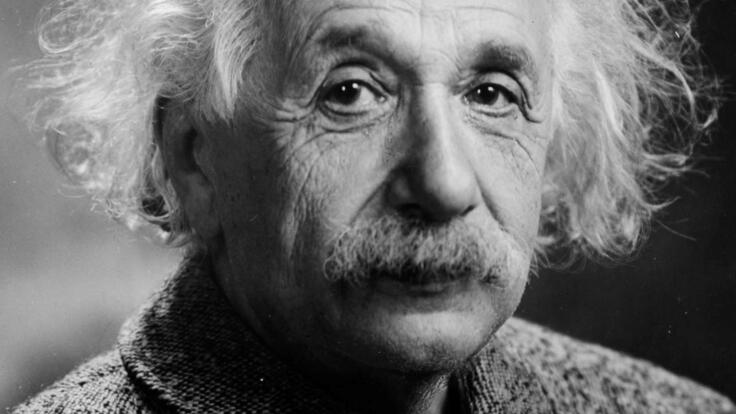 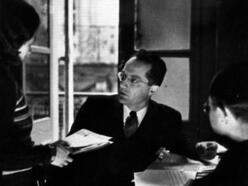 American branch of the European-based International Relief Association (IRA) founded at the suggestion of Albert Einstein to assist Germans suffering under Hitler. Refugees from Mussolini's Italy and Franco's Spain are later assisted. 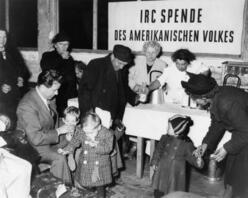 The IRC, at the end of World War II, initiates emergency relief programs, establishes hospitals and children's centers and starts refugee resettlement efforts in Europe. With the descent of the Iron Curtain in 1946, the IRC initiates resettlement program for East European refugees, which continues until the end of the Cold War.

The IRC intensifies its aid in Europe with Project Berlin, providing food to the people of West Berlin amid increased Soviet oppression. 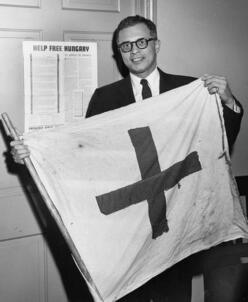 Leo Cherne, a board member since 1946, elected IRC Chairman, a position he would hold for 40 years.

In South Vietnam, the IRC begins a program to aid one million refugees following defeat of the French by the North Vietnamese.  The program develops into a vast, long-range relief and resettlement effort for Indochinese refugees: Vietnamese, Laotians and Cambodians.

The IRC starts resettlement and relief programs for Hungarian refugees after the revolution is crushed by Soviet forces. 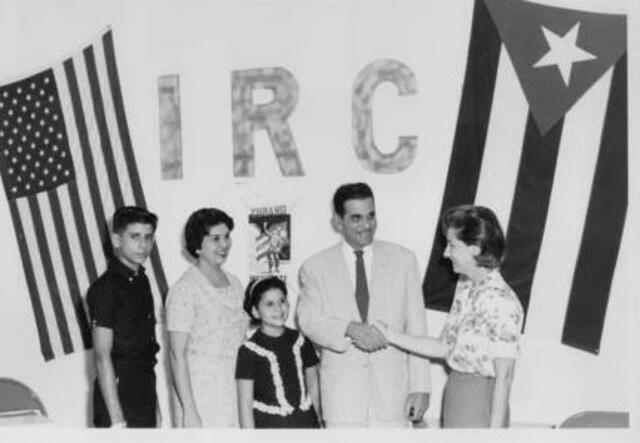 The Estevez family was one of many Cuban families resettled in the U.S by the IRC during the 1960s.
Photo: IRC

An IRC resettlment program begins for Cuban refugees fleeing the Castro dictatorship and for Haitian refugees escaping the Duvalier regime.

IRC operations are extended to Africa when 200,000 Angolans flee to Zaire; IRC also begins aid to Chinese fleeing to Hong Kong from the mainland.

IRC provides extensive support, especially medical, health, child care and schooling, for the 10 million East Pakistani refugees fleeing to India.  The work continues as the refugees return to their new nation of Bangladesh.

IRC takes a leading role in the resettlement of Asian nationals persecuted and expelled from Uganda by dictator Idi Amin.

Chilean refugees are assisted by the IRC in their efforts to win asylum in the U.S.; IRC also helps refugees from Uruguay, Paraguay and Guatemala.

The IRC begins emergency relief, medical, educational and self-help programs for Indochinese refugees fleeing to Thailand, later to include thousands from Burma.

IRC President Leo Cherne organizes the Citizens Commission on Indochinese Refugees, comprising a cross-section of America's political, cultural and religious leaders. The Commission conducted many trips to Southeast Asia and for years served as the leading advocate of people fleeing from Vietnam, Cambodia and Laos. 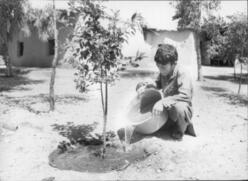 Departure of refugees from the Soviet Union - mostly dissidents, Armenians, Jews reaches a peak of 53,000.  Thousands are resettled by IRC.

IRC starts emergency programs in the Sudan for flood of refugees fleeing Ethiopia. The work extends to Somalia in 1981. 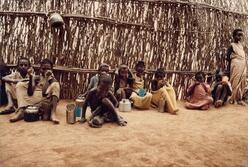 IRC assists Palestinian and Lebanese refugees uprooted by the war in Lebanon.

In El Salvador, the IRC initiates a broad range of health, child care and community development projects for displaced victims of civil war.

Spanish Refugee Aid becomes a division of IRC, serving the survivors of the Spanish Civil War in France. 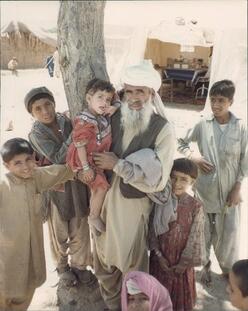 Women's Commission for Refugee Women and Children established by IRC to serve the rights and interests of 80% of the world's refugees: women and children. 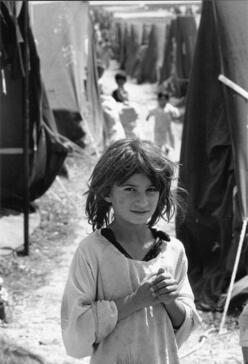 This young girl was among the thousands of Iraqi refugees who were forced to leave their homes and flee for Turkey in the early 1990s.
Photo: A.Hollman/UNHCR

After the first Gulf War, the IRC comes to the aid of hundreds of thousands of Kurdish refugees who flee to the mountains of Turkey to escape Saddam Hussein's terror.

IRC begins work in the former Yugoslavia dealing initially with the consequences of the ethnic cleansing carried out by the Serbs in Bosnia and Herzegovina. The IRC later launches comprehensive community rehabilitation programs in Bosnia.

IRC sets up emergency programs to aid Rwandan refugees pouring into Tanzania and the former Zaire (Democratic Republic of Congo) as a result of the genocide and ensuing civil war. 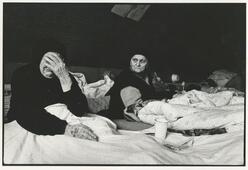 The IRC began work in the former Yugoslavia in 1992 following the ethnic cleansing carried out by the Serbs in Bosnia and Herzegovina. Since 1993, we’ve resettled over 20,000 refugees from the Balkans in the U.S.
Photo: Elizabeth Rappaport/IRC

In Burundi, the IRC begins emergency aid to displaced people in six of the country's 16 provinces.

These Kosovar refugees are among the hundreds of thousands whom the IRC aided in Macedonia, Albania, Montenegro, and Bosnia in the late 1990s. Photo: Mark Bartolini/IRC

IRC opens an office in the United Kingdom to support the IRC’s global interventions and to add a new voice to the sometimes disquieting debates on refugees and asylum in the UK. 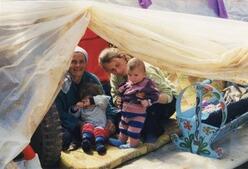 These Kosovar refugees are among the hundreds of thousands whom the IRC aided in Macedonia, Albania, Montenegro, and Bosnia in the late 1990s.
Photo: Mark Bartolini/IRC

Emergency operations are launched for the East Timorese following a rampage by Indonesian militia groups that leaves tens of thousands of people homeless. 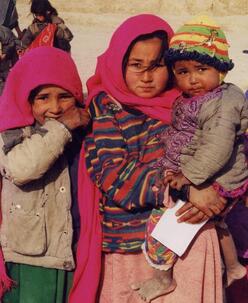 As the new millennium began, the IRC continued its work in Afghanistan, aiding millions of returning refugees and internally displaced Afghanis.
Photo: IRC

IRC activities broaden inside Afghanistan, with emergency aid programs to one million displaced people, and reconstruction and rehabilitation for more than two million refugees returning from Pakistan and Iran.

IRC participates in the demobilization of 1,200 child soldiers in Sierra Leone.

IRC responds to the war in Iraq with water and sanitation, and health care support.

Programs expand in West Africa, with continued war in Liberia and new fighting in Ivory Coast, and growing populations of refugees and displaced persons in those countries and in Guinea and Sierra Leone. Programs include health, education, family reunification and gender-based violence prevention. 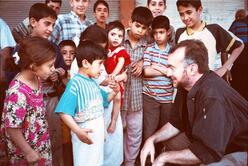 The IRC’s Mortality Survey for the Democratic Republic of Congo estimates that 3.9 million people have died in the DRC since the conflict began in 1998, making it the world’s deadliest conflict since World War II.

IRC mobile relief teams, with specialists in health, water and sanitation, and child protection, deliver emergency services and supplies to the province of Aceh, the region closest to the epicenter of the devastating December 26, 2004 earthquake and tsunami in Indonesia. 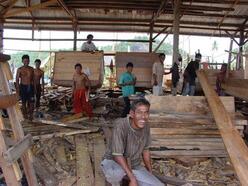 After a devastating earthquake and tsunami struck Indonesia in December, 2004, the IRC provided extended aid to the regions most effected, which included economic revitalization programs such as boat-building.
Photo: IRC

Following a devastating earthquake in Pakistan, IRC emergency teams respond to help 250,000 people and treat thousands of the sick and injured.

Only days after Hurricane Katrina destroyed a swath of the Gulf Coast in August, the IRC dispatches an emergency team of relief experts to Louisiana. It is our frst response to a humanitarian crisis in the United States. 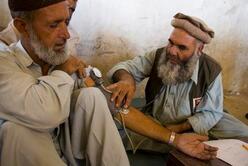 in the awake of a catastrophic earthquake in Pakistan, the IRC provided aid, including medical care, to 250,000 people.
Photo: Scott Anger IRC

Working with local groups, the IRC provided urgent assistance to thousands of people affected by fighting between Israeli forces and Hezbollah in Lebanon.

IRC launches campaign to aid and support over 4 million displaced and uprooted Iraqis.

The IRC observes our 75th anniversary. 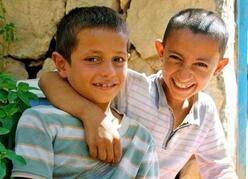 Throughout the 21st t century, the IRC has provided aid to millions of Iraqis whose lives have been uprooted by conflict in their country.
Photo: Rachel Unkovic/IRC

The IRC begins providing aid in Haiti after a massive earthquake strikes just outside Port-au-Prince on January 12.

The IRC helps Japanese aid groups provide lifesaving assistance to survivors of a massive earthquake and tsunami that struck northeastern Japan on March 11. 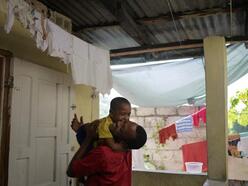 The IRC begins assisting Syrians whose lives have been uprooted by a brutal civil war. In 2015, we provided aid to over 1.4 million people inside Syria.

When one of the strongest storms in recorded history slams the Philippines, the IRC deploys an emergency team to assist the millions affected by Typhoon Haiyan.

A Syrian woman on Lesbos rocks her child to sleep in a transit site for refugees arriving on the Greek island
Photo: Tara Todras Whithill/IRC

When West Africa experiences the largest outbreak of the Ebola virus in history, the IRC is at the forefront of the response to curb its spread, training thousands of local health facilities in Sierra Leone and other countries on how to protect health workers and limit the spread of the disease.

When 60,000 unaccompanied children cross the border into the United States from Central America in the summer of 2014, the IRC seeks to find out why and to reunite some of them with relatives in America.

The IRC establishes an emergency response team on the Greek island of Lesbos to provide aid to the thousands of Syrian refugees arriving from Turkey who are fleeing their country's brutal civil war. The IRC soon expands our work to multiple refugee sites on the Greek mainland and in Serbia.

Violence that broke out following a contested presidential election drives 260,000 Burundians to flee the country and leaves tens of thousands internally displaced. The IRC provides support to uprooted families inside Burundi and in neighboring countries.