“But I had to carry on": A Story of Two Men's Fight Against Ebola

The Ebola outbreak, which swept across parts of West Africa claimed the lives of almost 12,000 people and infected over 28,000 others. As we mark its second anniversary, we share a story of two men fighting against Ebola in Liberia.

Beneath a mango tree in the dusty village of Jarmulor in Liberia’s Lofa County, 42 year old Jartumah Kamara leafed through the laminated booklet in his hand until he found the right page. “Malaria” he began, pointing to a diagram of a small child asleep under a mosquito net, as the crowd of two dozen onlookers strained for a better view.

“Everyone must sleep under a mosquito net,” he announced. “Especially the children and the pregnant women,” he told his audience in the local Loma language.

For almost a decade Kamara has worked as a General Community Health Volunteer for the IRC, bringing health advice and support to local communities. With his handy book of diagrams, Kamara’s job is to persuade people to take action against preventable diseases, the top cause of death in Liberia, and to make sure the sick receive the treatment they need from the IRC-supported health centre in nearby Barkedu.

The job is not easy - four days a week he sets out in the morning to walk up to 15 kilometres to reach a given village - but by mid-2014, Kamara was well used to the job and knew exactly how to go about monitoring the remote region’s health needs. 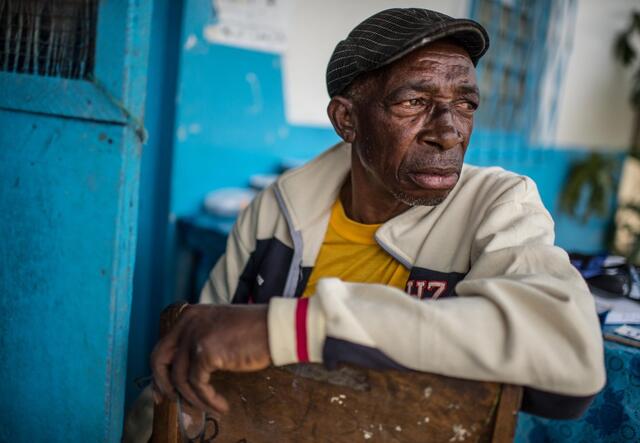 Sylvester Dunbal, a 58 year old nurse, worked with patients in an IRC-run health centre throughout the Ebola outbreak. Today his children say they are proud of his work.
Photo: Tommy Trenchard/Panos/IRC

Kamara has spent over 10 years working with the IRC in Lofa County. “Even though Ebola is finished, we still have a lot of work to do”, he says.

Kamara’s wife and children were scared too, and moved out of the family’s house in Jarmulor village. “Living here at that time was not easy” he said, sadly. “But I had to carry on, because I didn’t want to see the rest of the people infected.”

Along with the rest of the staff attached to the local health centre, Kamara received safety advice and psychological counselling during the outbreak.

“IRC trained us on safety and practical things, but they also taught us how to free our minds so we could keep doing our job. They told me that sometimes I should just go home and read a book, or go out to the garden and do some work so I could forget about everything. They told me when things are too much I should gather my children and we should tell stories together.”

After Ebola finally subsided, both men turned their focus to rebuilding and preparing the community to deal with any future outbreaks. “Even though Ebola is finished, we still have a lot of work to do” Kamara explained. He is constantly at pains to emphasise the importance of maintaining infection control measures when visiting the communities he serves.

In the Barkedu health clinic, Sylvester is also doing what he can to support early recovery. For a time, the clinic had to shut down altogether as the staff feared for their lives, and it has been a tough challenge to restore trust. But Sylvester is confident. Attendance at the clinic has bounced back from a low of just 200 patients per month immediately after the reopening, to 600 and rising.

“My children are happier now that the outbreak is over” said Sylvester. “And they are proud of my work. I showed them the certificate IRC gave me and now they know that I am a strong man.”

With support from the European Commission's Humanitarian aid and Civil Protection department (ECHO), the IRC is supporting a total of 78 health centres across Lofa and Maryland counties, which are providing lifesaving care for local communities and helping them to overcome the recent Ebola outbreak. In the wake of the crisis these health centres are being revitalised, ensuring that the population of Liberia has access to safe, quality, life-saving healthcare and that the health system is prepared for any future outbreak or emergency.