Supporting mothers and babies in a time of crisis

Two month old Mamie Koiwo screwed up her face in surprise and let out a brief wail as a nurse in apple green scrubs administered the polio vaccine. In October, Mamie entered the world just twenty feet away in the delivery ward of the Konia Health Centre in Lofa county, northern Liberia. Only days earlier, the last Ebola case had been registered in the country in the largest outbreak ever recorded, leading to over 4800 confirmed deaths in Liberia alone.

Mamie’s young mother, 20-year-old Gborlu, beamed, gently rocking her baby until she stopped crying. Gborlu is one of hundreds of women who have benefitted from the maternal and child healthcare facilities offered by the centre since it opened in 2005 .

“I found out about the clinic from my brother”, she explained. “So I thought I should come and see it. When I got here everyone was so friendly. They really took care of me”.

Six months into her pregnancy, Gborlu caught malaria, throwing her into a panic about the upcoming birth. “I was so scared. For myself and also for the baby. I even thought I might die. But they gave me medicine and lots of Oral Rehydration Salts and I started to recover”.

During that time, Gborlu attended pre-natal sessions, where she was taught about the importance of giving birth in a clinic, as opposed to at home. Liberia’s infant and under-5 mortality rates are among the five highest in the world,  making centres such as Konia a vital lifeline for the local community. During the Ebola outbreak mothers and children became even more vulnerable as they were often prevented from accessing much-needed healthcare due to the closure of already limited health centres or lack of medical staff, some of whom were infected and died in Lofa.

“If you deliver at home in Liberia you can get any kind of problem and there would be no way to get help” said Gborlu. “And the friendly woman told us everything here was free, so that’s why I decided to come and deliver here.”

In the end, the birth went smoothly, and Mamie has since grown into a chubby and healthy baby, much to her mother’s relief. Now fully vaccinated against polio, pneumonia, measles and several other infectious diseases, Gborlu can finally afford to relax a little.

The International Rescue Committee has been working in Liberia since 1996, and today provides services to over 740,000 people, including training local health workers, conducting health outreach in local communities and providing much needed reproductive health services. Women, like the friendly woman Gborlu describes, are part of IRC’s outreach with Trained Traditional Midwives who help to ensure that pregnant women, whom might have delivered at home, come to care in facilities and have safer deliveries.

When Ebola hit the country in March 2014, the IRC was at the forefront of the fight to prevent the spread of the deadly disease. As the Liberian government struggled to get to grips with the outbreak, the IRC used its longstanding relationship with local partners to provide medical supplies, protective equipment and training to local health workers, and in partnership with community leaders, helped to educated people about Ebola prevention. 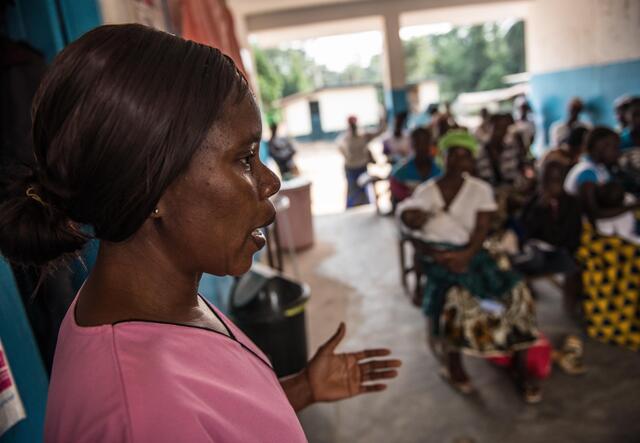 For Patricia Goanue, Konia Health Centre’s Officer in Charge, the true value of the clinic became all too clear during the Ebola outbreak, when fear and rumours kept people away from seeking treatment.

“During that time there were so many health problems in the community” she said. “But you can see how many people are coming here now. The clinic is very important to these people. When I see a sick patient coming in, and when I see them leave healthy again, that’s what really makes me happy.”

Sitting behind a desk in her cluttered office next to one of the Ebola screening rooms, she explained the extent of the IRC’s support. “The IRC provide the supplies and all the drugs. Even the generator we use for electricity. But they also trained us on many things, like gender based violence, family planning, midwifery and infection control.”

“The vaccination programme is particularly important,” she explained. “Infectious diseases used to kill a lot of people in Liberia. But when a minor outbreak of measles broke out earlier this year, all the vaccinated children were safe.”

For many families in the area, the centre is a lifeline in a region where few can afford the cost of transport to seek treatment in the nearest sizeable towns, Zorzor and Voinjama, both of which lie at least an hour’s bumpy motorbike drive down the chronically potholed main road that runs through Lofa County.

“If this clinic was not here I would have had to pay a lot of money to go to Zorzor” said Angeline, a young mother and student who struggles to make ends meet selling peanuts and peppermint when she’s not in school. “That would be a big problem for me. But here I can come for free.”

Supported by the European Commission's Humanitarian aid and Civil Protection department (ECHO), the IRC is supporting a total of 78 health centres across Lofa and Maryland counties, which are providing lifesaving care for local communities and helping them to overcome the Ebola outbreak. In the wake of the crisis these health centres are being revitalized, ensuring that the population of Liberia has access to safe, quality, life-saving healthcare and that the health system is prepared for any future outbreak or emergency.