Riding the bus from northern Jordan to the port city of Aqaba, three teenage girls beam with excitement as they approach the Ayla Aviation Academy. They are imagining what it will be like to fly in an airplane.

The eldest, 17-year-old Marwa, dreams of becoming a pilot. Her sister, Zaher, 15, wants to be a flight attendant. They are Syrian refugees. Their Jordanian friend Hajar, 14, aspires to become an astronaut.

“When I was younger, I would always go to the roof of our house in Syria and see planes and wave to them,” says Marwa. “I used to wonder how the pilot felt—does he or she see us down below?”

Says Zaher, “I used to watch flight attendants on television—how they dress, how they talk. Everything about them was nice.” 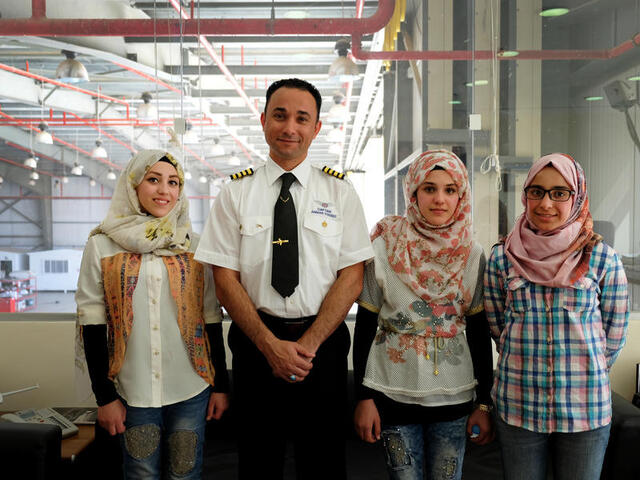 (L-R) Marwa with her younger sister, Zaher, and friend, Hajar, tour the Ayla Aviation Academy in Jordan with Capt. Marwan Atalla. The girls spent a day experiencing what it’s like to be a pilot.
Photo: Kaity Kawar

“I want to know what it’s like up in space,” Hajar adds. “I would watch how astronauts dress, and float in space.”

Marwa and Zaher took part in a 12-week course run by the IRC during which adolescent girls develop communication and leadership skills. Hajar participated in a seperate IRC creative workshop where she imagined her future personal and professional life through drawings and photographs.

After an Ayla Aviation Academy employee spotted Hajar's photos online and read about how dream to fly, the academy invited her and her two Syrian friends to visit the facility.

“The idea was to give these young ladies an opportunity to experience the world of aviation—to see the academy, to fly in an airplane, be more motivated,” says Capt. Marwan Atalla, founder and CEO of the academy. “And also, to inspire others to help youth regardless of who they are.”

Making up for lost time

Five years ago, when their home was destroyed, Marwa and Zaher's family fled Syria, evading bullets and barbed wire. They are among the 4.8 million Syrians who have left the country since the start of the civil war. 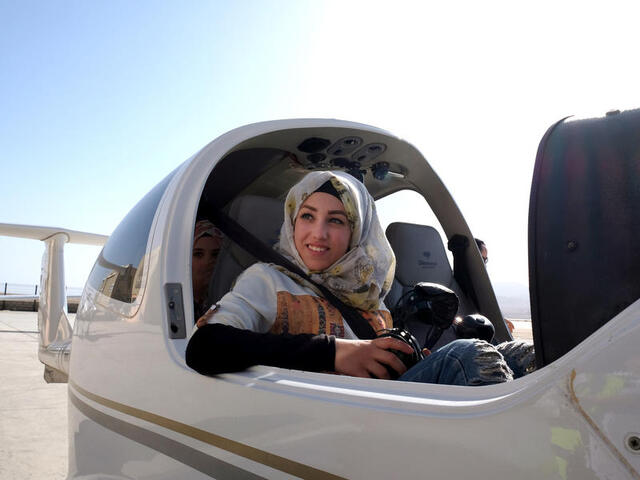 “A lot of families that were with us got shot or died,” Marwa recalls. "We’re one of the few families who survived.” The sisters now live in the city of Irbid where public schools are over capacity, making it difficult for Syrian refugees to register.

“It’s been five years since we have been in a classroom,” says Marwa. “We try to register every year. I used to like going to school in Syria. I feel like I’ve lost too much time. I sit and think about other girls my age and they’re all going to university. I feel like they have secured a future, but I don’t feel like I have.”

The girls hopped off the bus more than ready to start the tour at the academy. First they were introduced to instructors and students who share their own stories and journeys, fueling the girls’ imaginations with the possibilities that lie ahead.

“They made me think that I should start over,” says Marwa. “When I met the students at the academy, it motivated me to not give up on the idea of going back to school. It made me think that even though five years have passed, I can continue now.” 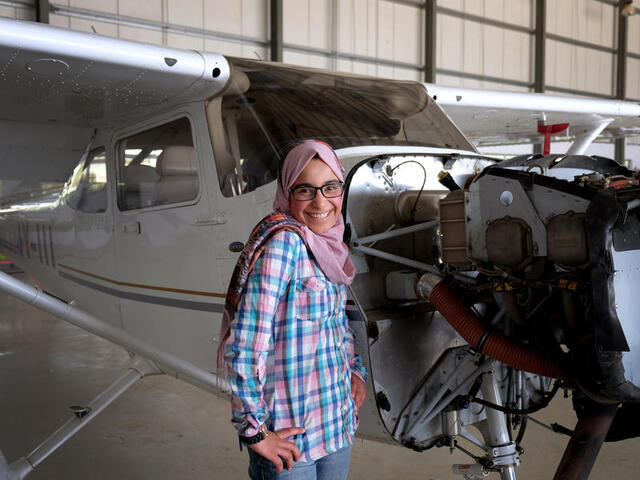 IRC programmes in Jordan also benefit vulnerable Jordanian women and girls like 14-year-old Hajar, who hopes to be an astronaut. “At the [IRC workshops], we learned about our rights and drew drawings about the disadvantages girls face,” she says.
Photo: Kaity Kawar

Hajar is the first to experience her dream. Nervous but eager, she climbs into a small airplane with another captain, who hands her a pair of headphones as he reviews the preflight checklist. When he determines all is in order, the plane begins to taxi down the runway. Then, with a slight jolt, it leaves the tarmac, begins to climb into the sky. A wide smile spreads across Hajar’s face.

“The people seemed like toys [from up in the air], and I saw all of Aqaba,” she later recalled. “I saw the sea!” She can’t wait to fly again.

Marwa and Zaher are next. “It was amazing!” beamed Marwa afterward. “I felt like my dream came true when I got into the plane and saw how the captain operates.”

As the day comes to a close, Capt. Marwan has one last surprise for the two sisters—a scholarship to continue their high school education at a private school.

“What impressed me the most was how much they appreciated this, how much it meant to them,” he says. “To us it was any other working day, but to them it was an experience that will motivate them to work hard and do something with their lives.”