The masks of Syrian refugee children

Children of war have experienced unimaginable trauma. It’s difficult for them to express themselves and heal from their experiences. Art can help — providing a powerful tool for young people in conflict zones to release their emotions and communicate their feelings.

Ongoing war in Syria has left 12.3 million people displaced. Seeking safety across the border, many children have been separated from their families or sent to Jordan on their own for their safety.

The IRC has been working with unaccompanied and separated children in the camp since April 2014. Some bear the physical and psychological wounds of war and all are distressed due to separation from their caregivers. The IRC ensures that they are safe from abuse, neglect, exploitation and violence, and facilitates their reunification with relatives and integration into new communities in Jordan.

Their masks tell stories of exile, pain and hope. 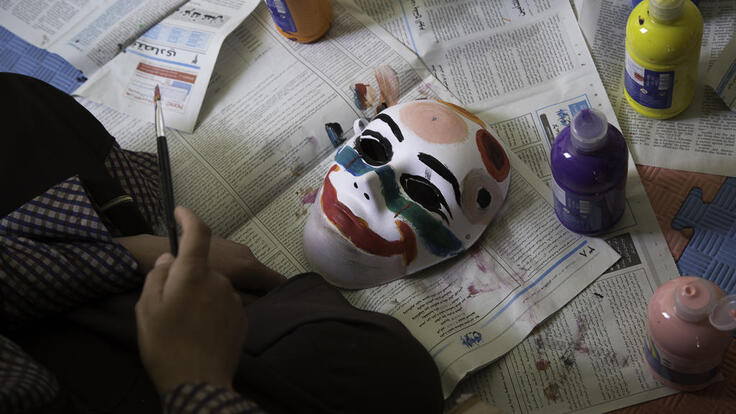 Children in the workshop were first given white masks, and asked to reveal what they thought their face would look like if it could represent their feelings. It was a way for them to project their emotions onto something visible and tangible, which is often a step within a long healing process.

“I drew black eyes and red tears, because sometimes I look back on the past and I feel like I’m crying blood reminiscing,” said Hassan*, a 14-year-old refugee from Syria’s Aleppo countryside. “Some days are good, other days are bad but I still thank God for everything.”

“The tears are red, because that’s what happens to the innocent person when evil takes over him; they bleed. That’s what’s happening in Syria now,” said Ahmad, a 17-year-old refugee from Homs. “The mouth is red because he can’t speak. He’s afraid of what’s inside him. Sometimes I see injustice, but I can’t say anything because I don’t want to hurt my family.”

Others painted in memory of people they were close to back home.

Red and black colours, as well as red tears, were recurring themes among the masks painted by the children.

“I drew the face of a woman that cared for me in Syria,” said Hussein, 14 years old. “I lived with her family and she took care of me after my mother passed away. She treated me very well.”

Hassan also used his mask to commemorate his long-lost friend.

“When I was painting the mask, I was thinking about a person that I loved and lost,” he said. “He was a good friend of mine from Syria, and we came to Jordan together, but then I lost him when we arrived to the camp. I don’t know where he is. I drew a sad red mouth because I’m sad I lost him.”

After the children painted the first masks, they were given new blank masks to paint, to show what they would look like in 10 years.

“The second mask I drew is black, green and red,” said Ahmad. “Green represents the greenness of my country, red represents the red line that no one should cross when it comes to Syria, and black represents the black heart that took over my country. I hope to be able to defend my country in the future. I don’t want to take sides; I just want to fight for justice.”

Others also expressed their hope for the future, and their desire to help those who were affected by war.

“The second mask I drew, I drew the injured people of Syria. I will heal them when I grow up … I want to be a doctor,” said Hussein. “I then colored over them; the colors represent nature. That’s where I want to live, in nature. Between the trees and water.”

*Last names have been omitted to protect the childrens' privacy.