What it’s like to be a mother in conflict

Being a new mother is beautiful but equally challenging. The physical and mental toll of bringing new life into this world is no mean feat. New mums have so much to master. From bodies changing to sleepless nights, priorities change when you become a mum, no matter where in the world you live.

But for new mothers in places like Afghanistan, Syria, Nigeria and Ukraine, conflict and crisis adds immeasurably to the challenges of raising a family.

Instability has devastated the health system in Afghanistan, leaving midwives without salaries and new mothers without postnatal care. In Syria, continued attacks give parents only moments to leave their homes, unable to pack their children's clothes, blankets or toys. Climate change and armed conflict is forcing families in Nigeria into displacement, often leaving behind their livelihoods such as farming and agriculture. In Ukraine, the world watched on in horror as expectant mothers were forced to give birth in bomb shelters as the war waged on around them.

These mothers live in some of the most challenging conditions in the world, but they are determined to give their babies the best chance at life. Meet the mums and babies supported by the IRC in some of the world’s worst humanitarian crises. 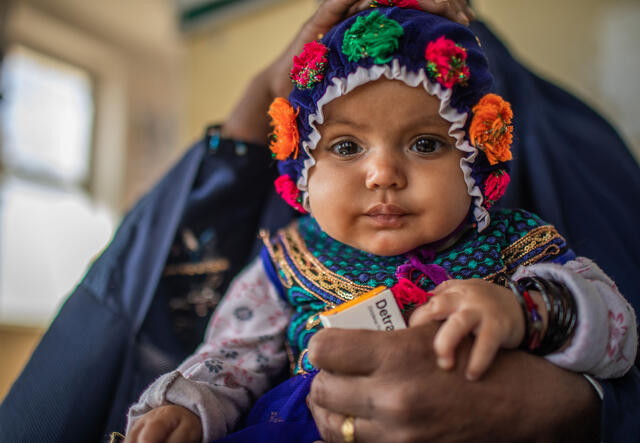 “We love her!” five-month-old Seema has made her mother Mosina very happy.

Photo: Kellie Ryan for the IRC.

Crisis in Afghanistan has had a huge impact on health facilities across the country with 90 percent at risk of closure. This leaves new and expecting mothers uncertain if they will get the care that they need for themselves and their babies.

31-year-old Mosina* gave birth to Seema* at an IRC clinic in Afghanistan. Having lost a child during birth, she and her husband were very anxious during Mosina's pregnancy but both were relieved that the birth went well.

Mosina explained, “Seema has come into this world and it makes us happy and we celebrate it. We love her. We are happy.”

The IRC is working to fill the gaps in Afghanistan's health system. Currently, the IRC is supporting 62 health clinics to ensure that communities are provided with vital services.

Read about our response in Afghanistan.

When Abuk’s home flooded, everything was destroyed, and her baby became sick 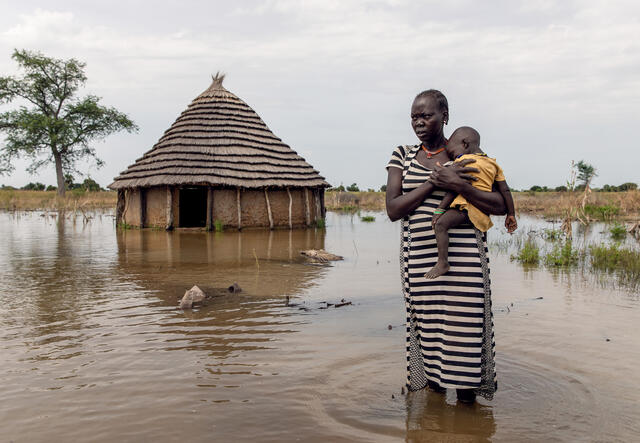 When Nyriou became unwell, she suffered from fever and had diarrhoea. Mum Abuk took her to the clinic where she was treated with medicines and Plumpy'Nut.
Photo: Adrienne Surprenant for the IRC

When extreme weather caused flooding in Abuk’s home in South Sudan, it destroyed everything. “We could not salvage a thing,” Abuk told us. “Water was coming from below, and it was raining through the roof. I got up, picked the baby up and covered her.”

The family lost everything, including the crops that they relied on. Even the crops they were able to salvage rotted quickly, leaving them with no access to livelihoods or food.

Abuk’s youngest child Nyirow became sick and started showing symptoms of malnutrition. She was vomiting and a fever and diarrhoea. “When she became unwell, I took her to the clinic to be admitted. She eventually became better, and the vomiting reduced.”

Climate change is having a huge impact on countries in North and West Africa, including South Sudan. Abuk says that every year things get worse. “Even if someone cultivates something, the crops may grow but are then destroyed.”

Read about our response in South Sudan. 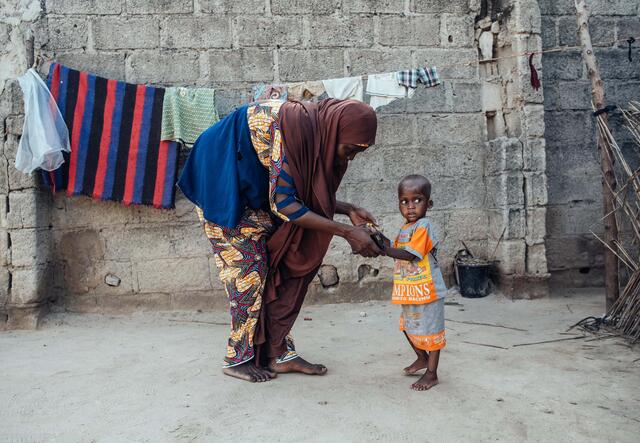 In northeast Nigeria the decade-long armed conflict has displaced thousands from their homes. Mothers like Naima* have been forced into displacement. And with it, she was forced to leave behind her family’s source of income—farming.

Without income, access to nutritional foods becomes scares, and many children suffer severe acute malnutrition. This is what happened to Naima's son Hadi*. When Hadi got sick, Naima reached out to the local healer in her community for help, but the situation got worse. Eventually, the IRC’s mobile clinic referred her to the stabilisation centre for malnutrition where she and Hadi spent 28 days as he was treated. When we spoke to Naima at the clinic she said: “Ever since we came here, my baby’s health has improved by the day and I am happy to go home today.”

Last year, in Nigeria alone, the IRC treated 32,000 children under the age of 5 for acute malnutrition.

Read about our response in Nigeria.

Dima is raising her children in a refugee camp in Syria 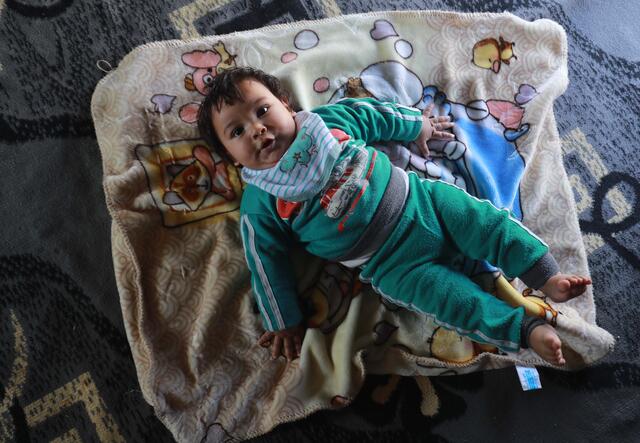 “I try to keep my kids’ spirits up by playing with them, trying to teach them, telling them stories and jokes. I play with them most of the time whenever I have free time after I finish my household chores,” says Dima.

Photo: Delil Souleiman for the IRC

Dima and her husband have been displaced three times due to the conflict in Syria. “We had to leave our home due to the war and the airstrikes,” she explains.“We only left with the clothes we were wearing. We lost all our belongings that we had accumulated for years.”

The journey was extremely difficult as they were subjected to shelling close to their home. In the first camp they settled in they slept on the ground in cold weather and there was a lot of bombing. When they later settled in Mahmoudi camp in Raqqa, Dima gave birth to her first child. “I felt so scared as I was giving birth for the first time when I delivered my daughter," says Dima, "but the conditions of the hospital were good thankfully."

Dima is determined to provide the best care for her children despite the difficult context of the camp. “I face a lot of challenges – particularly as I can’t afford to cover their needs like buying food for them, including fruits and milk. I also worry about their education as there is no stable education system like before.”

Dima was studying for a degree in chemistry before she was displaced, now, her biggest hope is that her children are able to get an education. “I want to give them everything in life, especially education as I consider it very important.”

Read about our response in Syria.

Fleeing Ukraine with a five-month-old baby, and millions of others searching for safety 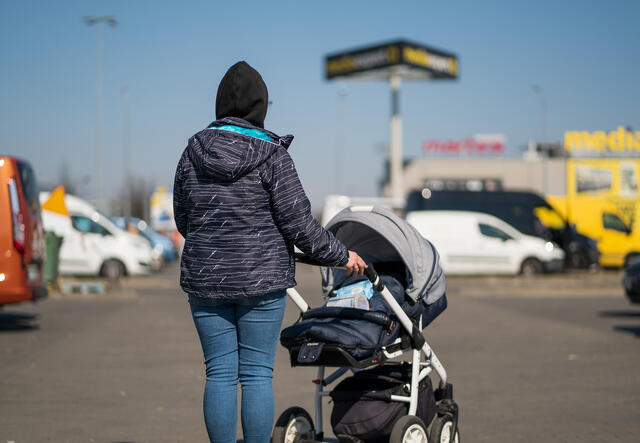 “There's no place to hide with such a small child.” Helen fled conflict in Ukraine with her 5-month-old baby boy, leaving her husband and parents behind.
Photo: Andrew Oberstadt for the IRC

It’s not easy travelling with a 5-month-old baby, especially at the same time millions of other people are fleeing their homes to find safety.

When 26-year-old Helen fled the escalating conflict in Ukraine with her son, she packed baby clothes, food to sustain them, and left everything else behind.

“When the war came, it was a shock," she says. "When they were shelling only in the east it was quiet. But when the offensive started in the western part, I was terribly scared. I had to leave my house, while my husband and parents remained at home."

Her biggest fear was leaving her husband behind and never seeing him again. But she knew she had to leave to protect their son’s life. “I still hope to return and find my husband there.... I have a little son, 5 months old. So, I left...there's no place to hide with such a small child.”

Thankfully, Helen met many people who helped her and her baby get to Poland. While many refugees have spent up to eight hours attempting to cross the border into Poland, Helen was able to cross within three hours.

Now, she’s just waiting for the crisis to end and hopes to be able to return home to her husband one day soon.

Read about our response in Ukraine.