Arriving at the apiary, surrounded by the sandy-coloured hills outside Amman, beekeepers and friends Hudaifah and Yousef gather their crumpled beekeeper suits from the boot of their blue van, take out their bee smoker and make their way over to check on their beloved bees.

“If we haven’t seen our bees in a few days, we miss them,” admits Hudaifah, who became a beekeeper last year. “While we are walking to the apiary, we are excited to reach the bees and see them safe and sound.” 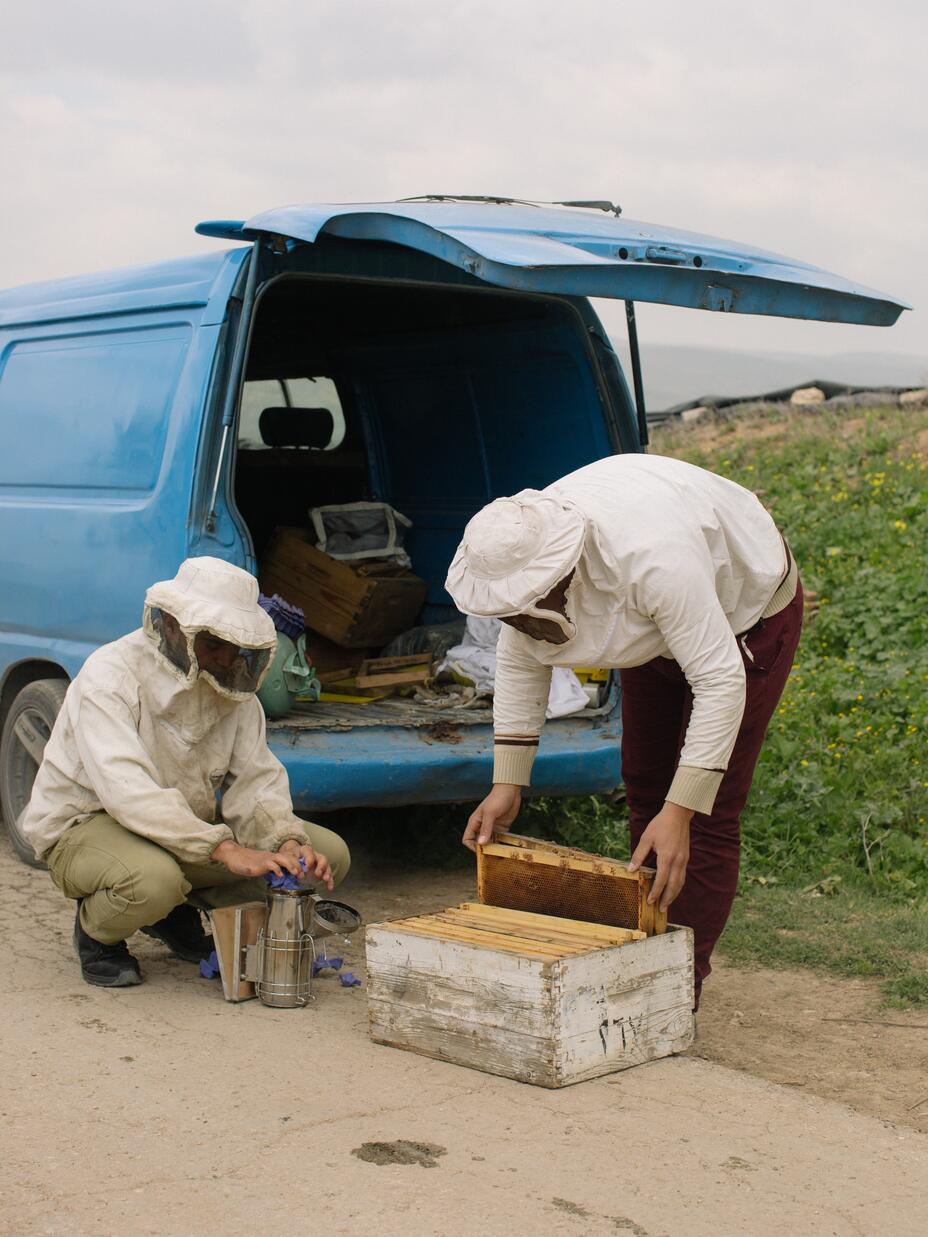 Hudaifah and Yousef feel a great attachment to their bees, which bring them plenty of joy - and honey!
Photo: Elena Heatherwick/IRC

Even as hundreds of bees buzz angrily around the hive, Hudaifah and Yousef show no fear. “A beekeeper must not be afraid of bees. The most important skill for beekeepers is self-confidence,” Hudaifah says. “Today, I had 10 stings, but I’m not scared – a sting is good for the human body!” 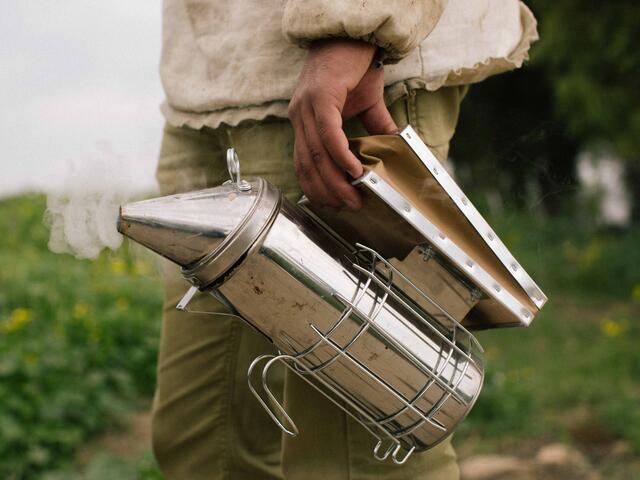 Hudaifah is resolutely unafraid of his bees, he's learnt tips online - like how to use a smoker to calm them.
Photo: Elena Heatherwick/IRC

When they first started out on their new venture, their friends and family told them they were crazy. “Oh yes, they think it’s very weird, but they like it now,” Hudaifah says, laughing. He says that they enjoy connecting with other beekeepers around the world who share tips to help their bees thrive.

They also work to educate people in the local community: “We visit farms and we explain how bees are useful for the environment and the pollination of plans, but insecticide use is harming the bees, and leads to a big number of bees being killed.” 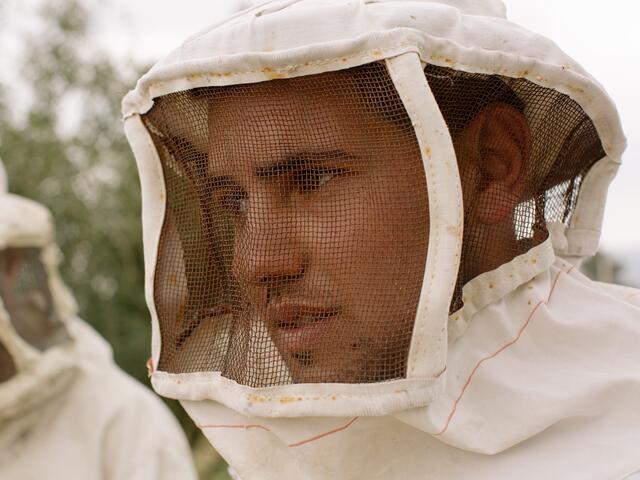 Hudaifah’s passionate about the inner workings of the bees’ lives. “The bee world is a big world, which makes me want to know more – like the role of the queen bee, the order of the beehive, the worker bees, the drones and how they lay eggs.”

But other than the intrigue of the bees, there’s one crucial reason Hudaifah and Yousef have got into this unusual line of work: honey. 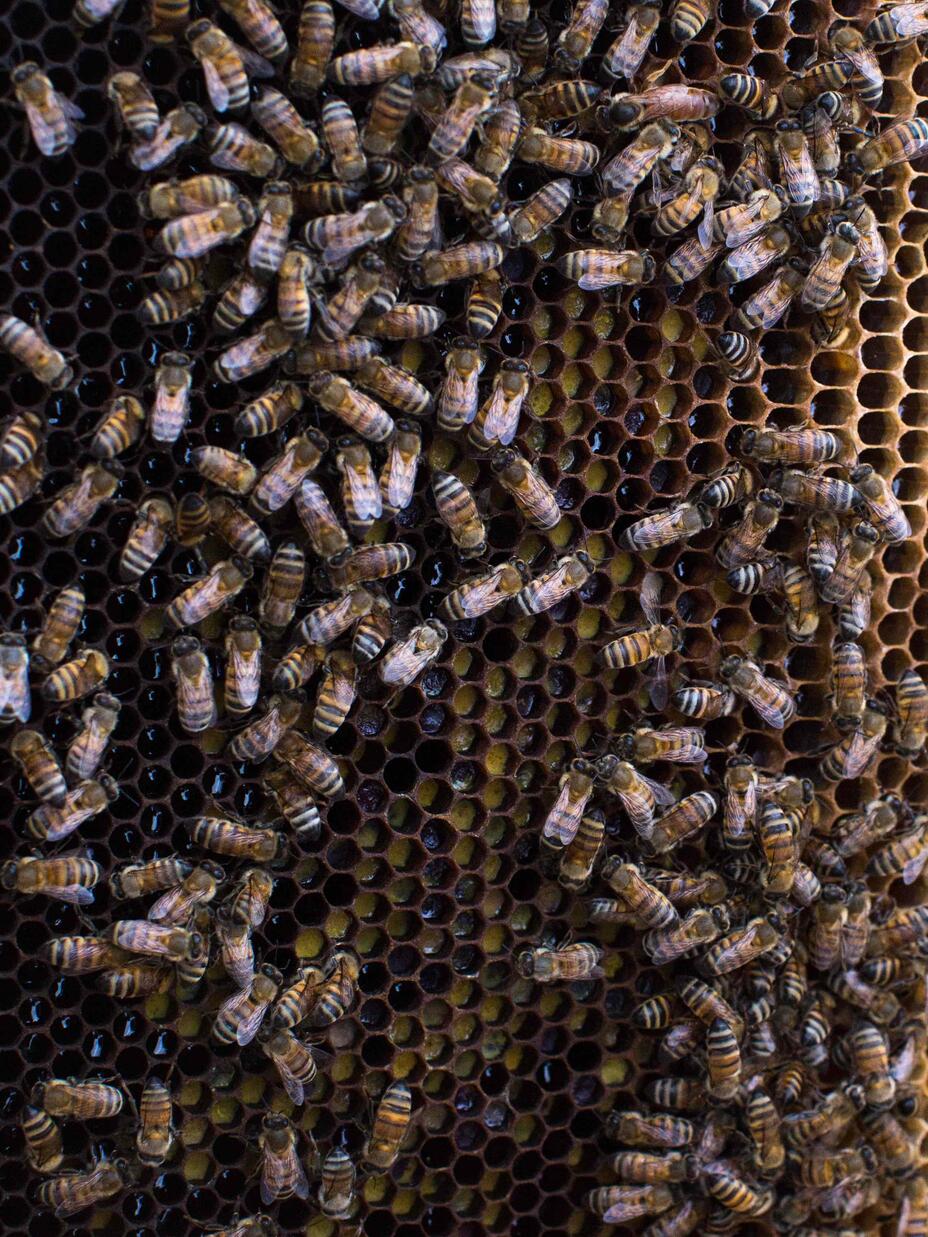 Hudaifah learnt skills from the International Rescue Committee to make money out of his hobby by selling honey.
Photo: Elena Heatherwick/IRC

Hudaifah was able to turn his hobby into a business with support from the International Rescue Committee’s Rescuing Futures programme, supported by the Citi Foundation’s Pathways to Progress initiative.

The programme enables vulnerable young Jordanians and Syrian refugees to kick-start their small businesses with training, mentorship and small start-up grants. “The programme strengthened our self-confidence in addition to providing financial support. I’ve learnt how to plan a project in order for it to be a success.” 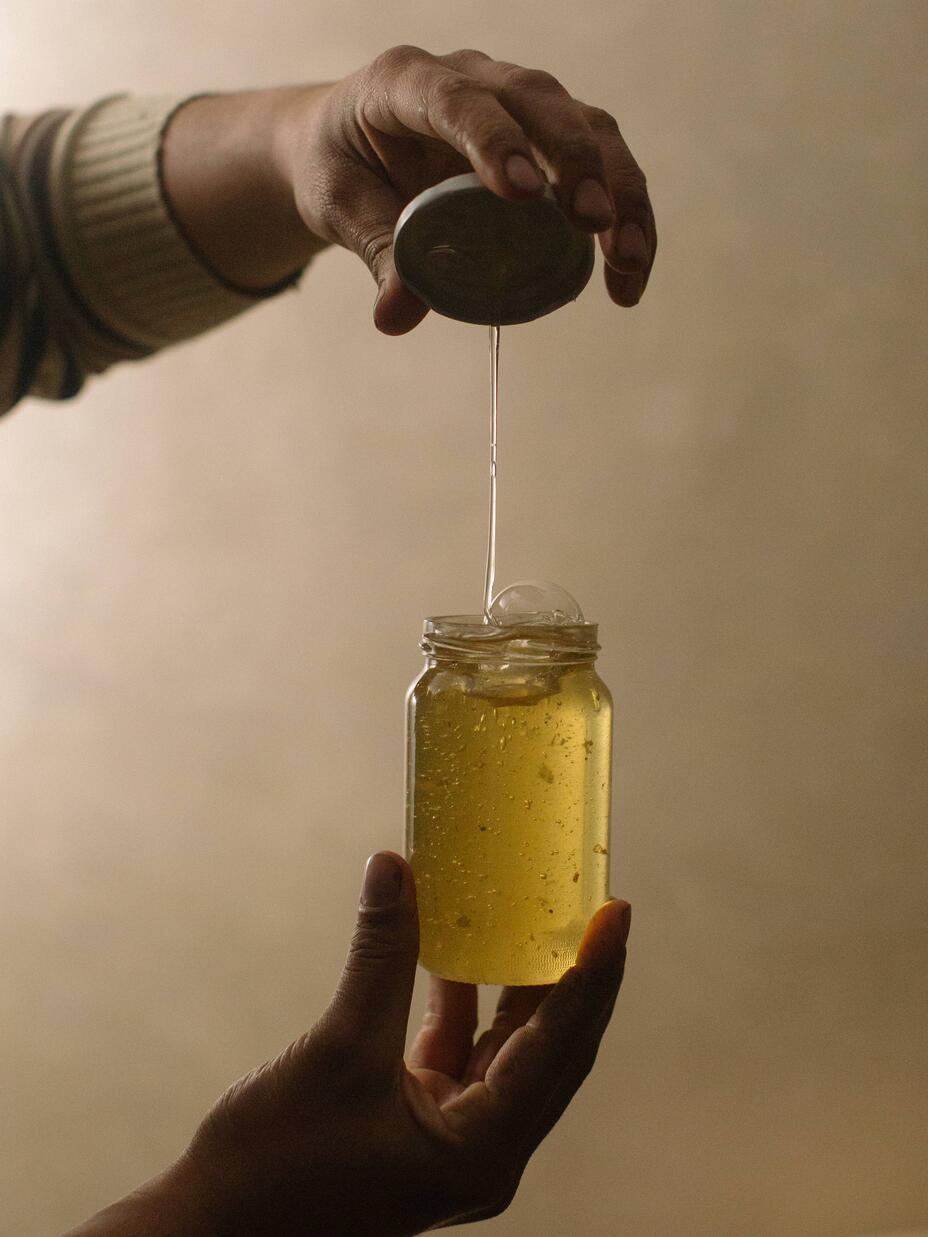 This golden honey comes straight from Hudaifah's hives. "The first jar I produced was almost 12 kilograms. I was like a kid who got a new toy.”
Photo: Elena Heatherwick/IRC

Hudaifah’s business provides important support for his family in Jordan, a country deeply affected by the conflict in neighbouring Syria. Hudaifah’s seen the benefit of Rescuing Futures not only for himself, but Syrian refugees forced to flee their homes and rebuild their careers in Jordan. “Syrians are our brothers. We have to welcome them, support them and let them work with us.”

Hudaifah bought a cylinder that spins the honey from the comb with the grant he received from Rescuing Futures. He’s now able to create more honey, faster, increasing his productivity and revenue. 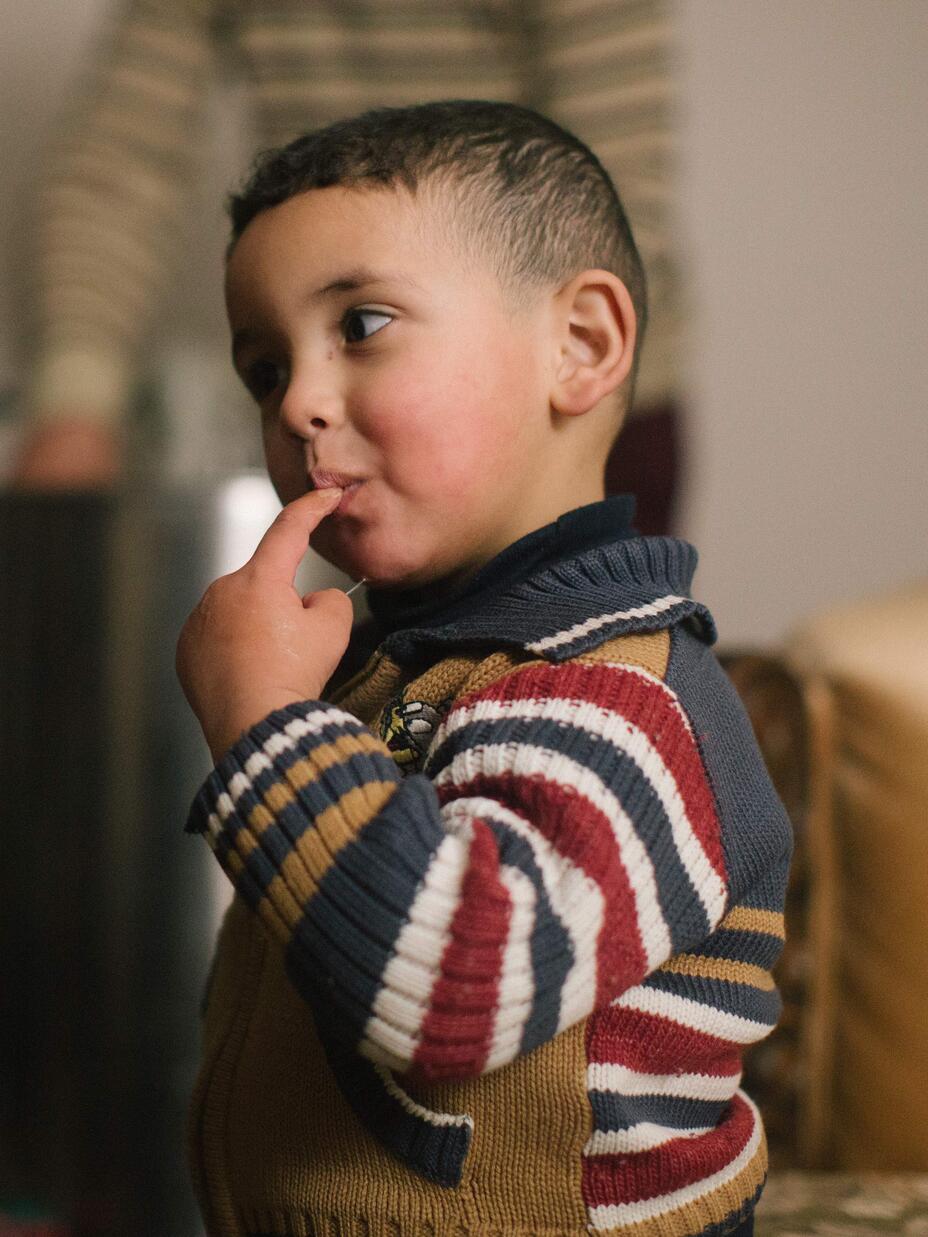 Their bees create jars and jars of golden spread that, for now, they sell in their neighbourhood and online. “The first jar I produced was almost 12 kilograms. I was like a kid who got a new toy.”

There is one kid who’s very pleased Hudaifah’s business is up and running: his four-year-old son, Bilal.  When Hudaifah comes home, Bilal runs out to meet him, knowing there will be a sweet treat.

He beams from cheek to cheek as he munches on a piece of honeycomb. “My son likes honey – after a while I have to take it off him, because he eats a lot.” 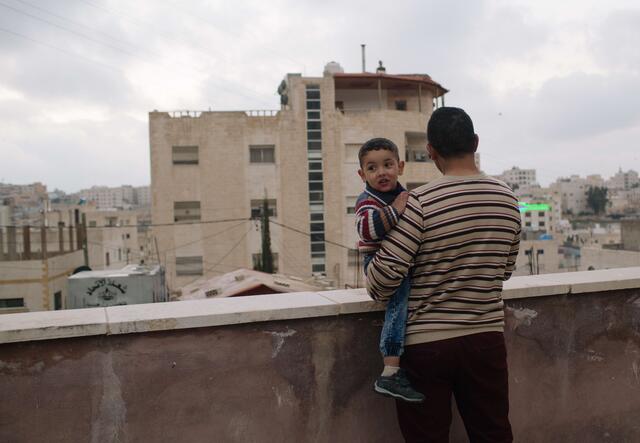 Hudaifah's got big plans for his business to expand outside of Jordan and go online.
Photo: Elena Heatherwick/IRC

Hudaifah loves providing honey for his community, but he’s not shy about his future plans: “I want to expand globally, to produce and export honey. I think gulf markets like Saudi and Emerati have a big demand for honey.”

We met and interviewed Hudaifah last year, since then, Jordan has gone into lockdown. Hudaifah recently let us know that he managed to get a permit to be able to go visit and care for his bees – he spent five days camping next to the apiary.

We recently received this picture from Hudaifah, who was given a permit to be able to continue to look after his bees during the lockdown in Jordan. pic.twitter.com/KRbuvxzUAN

Our Rescuing Futures programme, in partnership with Citi through the Citi Foundation, offers young entrepreneurs living in Greece, Nigeria and Jordan the chance to kick-start their businesses and reach their full potential.