In Nairobi, a young entrepreneur builds her salon business

I have just returned from visiting Susan Kayongo at her salon. Since we last met in the summer, a lot has happened. She and her business partners, Diana and Mariam, have moved their shop, called Destiny, to Kiambiu, a busy neighbourhood of Nairobi where the streets are lined with kiosks selling fruit and vegetables, clothes, pots and pans, charcoal, meat, and all kinds of fast food. They have taken on an apprentice, Maxmilla, and they now sell hair extensions and weaves in addition to the services they provide.

Despite competing with at least four other salons and barbers, Susan and her partners are doing well. “Business is good,” she says. “We moved here a couple of months ago because the rent is a little cheaper than where we were before. Now we are paying 1,300 shillings a month [about $11], which includes electricity. Before we were paying 1,500 shillings.” But the main advantage of their new location is the bustling street life. 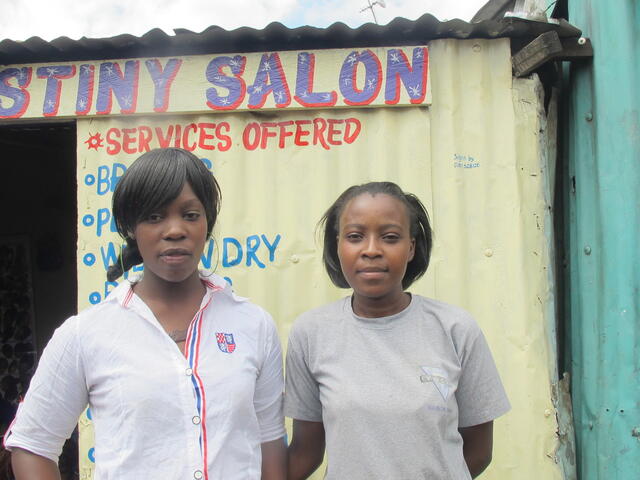 Susan Kayongo (left) and her business partner Mariam outside their salon in Nairobi.
Photo: Sophia Jones/IRC

“Sometimes people just come in from the street to have their hair done,” Susan says, adding that she’s excited about the forthcoming holiday season. “We have started doing nail art which is very popular.”

Elizabeth Mukami, an IRC program officer, is impressed with Susan’s entrepreneurial skills. “Susan has really progressed from the time she graduated from GEM last year,” she says, referring to the IRC’s Girls Empowered by Microfranchise program. “Susan has grown in skills and established herself. That is why she has been able to move to where she can get more customers. This is what we teach the girls in the GEM program—to make decisions and act on them.”

More than 2,000 young women are benefiting from GEM, which helps teenagers between the ages of 16 and 19 escape the cycle of poverty by learning to operate their own businesses. GEM graduates often partner with established companies—In Susan’s case, Darling Hair Products, a well-known Kenyan company—to start up shops of their own.Many entrepreneurs in turn hire staff like 20-year-old Maxmilla, who attends to an average of five clients a day—more than her counterparts see at most salons. “I’ve already learned plaiting lines, cornrows, weaving since I came here two months ago—they are very good teachers,” she says. “In the last place, we were making up to 2,000 shillings [$23] a week. Now we are making up to 4,000.” 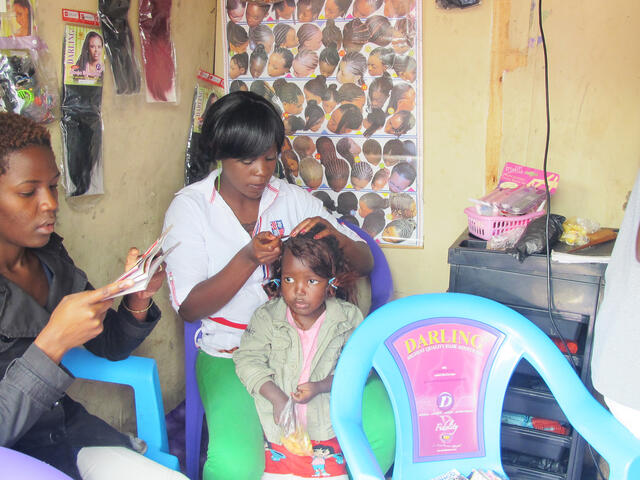 Susan braids a little girl's hair. The salon's move to a new location on a busy street means Susan and her partners have been able to attract new customers, including walk-ins.
Photo: Sophia Jones/IRC

Susan not only mentors apprentices at her salon, she also trains young women at Family Health Options Kenya (FHOK), an IRC partner based in Eastleigh, a suburb of Nairobi. FHOK is a youth program offering courses in tailoring as well as hairdressing. “I’m so happy that I can give back to my community everything that I have learned from Darling and the IRC,” Susan says.

As we talk, Leah, a regular client, waits for Susan to apply a weave. “I like coming here because they are my neighbours and my friends,” she says. “They are good hairdressers. Susan is going to weave my hair and Mariam is going to braid my little girl’s hair in a pussy-cat style.”

Meanwhile, Susan and her partners have plans to grow the business further. “This year we expanded by selling braids and weaves and doing manicures and pedicures. Next year we’re going to start selling beauty products.”