Low access and coverage for the treatment of acute malnutrition is as persistent and perplexing as it is unacceptable. The leading barriers to combatting malnutrition—distance to services and high opportunity costs—require a new approach. 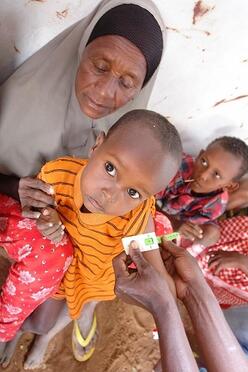 The child health community, through the integrated community case management (iCCM) of childhood illnesses strategy, has improved access to treatment for pneumonia, diarrhea, and malaria by enabling treatment outside of traditional health facilities through a large network of community health workers (CHWs). Since 2014, the International Rescue Committee (IRC) has been exploring a treatment algorithm and tools to empower low-literate providers and bring severe acute malnutrition treatment, without complications, directly to malnourished children in their villages.

This journey, which began in 2015, has included numerous patient registers, dozens of modified mid-upper arm circumference (MUAC) tapes, and partnerships with CHWs, designers, and experts in nutrition and iCCM. A year later, we have the results of the third and most recent field test, which took place in South Sudan. Based on our findings, the IRC believes providing treatment for acute malnutrition outside the facility is possible, understanding that there is still work to be done. 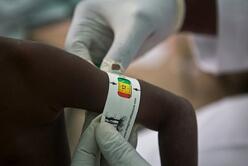 In addition to South Sudan, the IRC began developing and field-testing low-literacy tool prototypes in Mali, Chad, and India in 2015. In the recently wrapped field test in South Sudan, the IRC nutrition and iCCM teams—along with a human-centered design firm called Quicksand—worked with 30 low-literate female iCCM CHWs of varying ages and experience in Aweil South County in Northern Barh El Gazal State.

The process focused on capturing the end-user perspective. Each group of CHWs trained on the prototypes and participated in all three rounds. During each round, the CHWs practiced using the tools while being observed by the IRC and Quicksand team. At the end of each round, CHW feedback was solicited on each of the tools. For two rounds, CHWs worked with children enrolled in the outpatient therapeutic program.

A number of key results emerged in the process of developing and testing the tools:

Going forward, the IRC is planning to conduct another round of field testing to make a final decision on the toolkit. The IRC also intends to conduct research on the effectiveness of the simplified toolkit and begin collaborating with other organizations interested in piloting the tools.

This project was funded with UK aid from the UK government