Inside our work with children facing starvation

Imagine being a mother or father watching your child grow weak before your eyes.

This is the reality for millions of parents around the world whose children suffer from acute malnutrition. More than just hunger, acute malnutrition is a life-threatening condition that can impair development, increase the risk of infection and disease, and rob children of the opportunity to live healthy, full lives.

Acute malnutrition affects around 50 million children each year and roughly 80 percent of them don’t have access to treatment. These dire statistics will only worsen as violence and famine overtake countries in need.

IRC staff know that steadfast and compassionate support can prevent the loss of young lives - and give families hope for the future. Go with us inside Somalia, South Sudan and Yemen, three countries where courageous families and dedicated health workers with the International Rescue Committee work together every day to combat malnutrition.

Somalia is facing a severe drought that threatens to exceed the one that brought the country to the brink of famine in 2017. By the end of this year, almost one million children could suffer from malnourishment and 175,000 from severe malnourishment. Without external support, their chances of survival are slim. Additionally, 1.7 million people face acute food insecurity, or the inability to access necessary food, more than double the number in 2017.

The IRC is operational in Puntland and central Somalia, the main areas of concern, and we are scaling up our programming significantly. We support families with health care, emergency cash assistance, rehabilitation of water sources, and mobile health services to reach deeper into hard-hit areas.

"My life was good, but when drought and famine ravaged the land, people had to flee. There is no clean water to drink—people dig into dried river beds hoping to get some water. I am a farmer. There have been no rains, it's absolutely dry.... It’s impossible to work now since there is severe famine.”  —Aisho Abukar Ali, a farmer and mother who fled her home because of drought. Her twin daughters were both treated for malnutrition by the IRC. 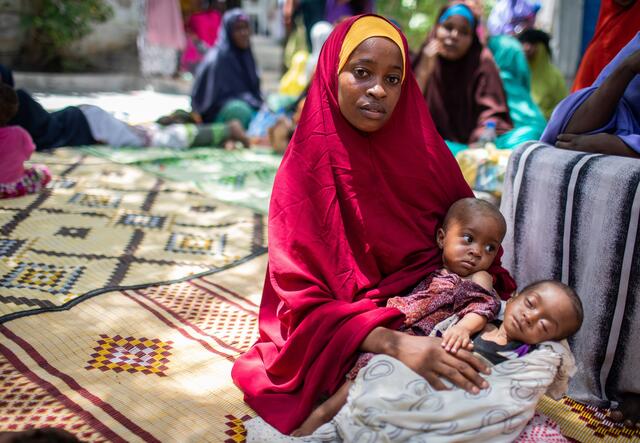 Aisho Abukar Ali is a farmer and mother who fled her home because of drought. Her twin daughters were both treated for malnutrition by the IRC.
Photo: Kellie Ryan/IRC

South Sudan suffered from extreme levels of food insecurity this June and conditions are likely to deteriorate further. Food insecurity is driven by conflict as people forced from their homes cannot grow food or tend to their livestock. An estimated seven million people will be in need of food assistance this summer. Some 860,000 children are expected to suffer from acute malnutrition, and 259,000 from severe acute malnutrition, in 2019.

The IRC has more than 480 staff in South Sudan responding to the food crisis. We continue to provide support for health and nutrition services, child protection, reproductive health, and women’s protection and empowerment. The IRC is one of the largest providers of aid in South Sudan, serving more than 900,000 people.

“I was so worried. I had never seen someone dying before. But here my child was, dying in front of me. Luckily the worst did not happen. I was hoping that the treatment here would work. If it didn’t, I don’t know what I would have done.” — Adut Lual, a mother and IRC client who walked six hours to seek treatment for her daughter. 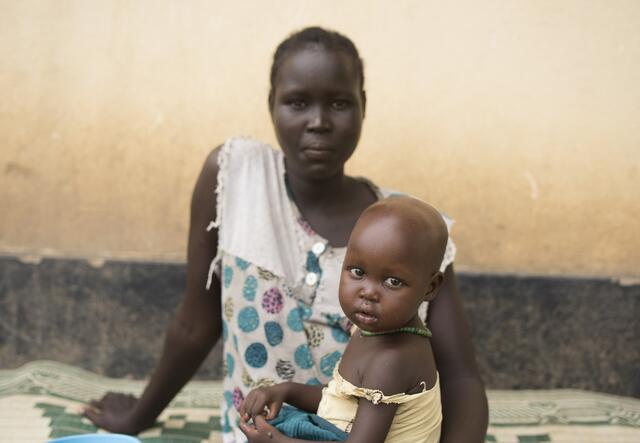 Adut Lual is a mother and IRC client who walked six hours to seek treatment for her daughter.
Photo: Kellie Ryan/IRC

Yemen, also teetering on the brink of famine, is one of the largest humanitarian disasters in the world. Across the country, two million children under age five are acutely malnourished, including 360,000 suffering from severe acute malnutrition. Two-thirds of the population is at risk of starvation and almost 80 percent of the population is in need of assistance and protection, including 14.3 million who require immediate aid.

The IRC is a major provider of humanitarian assistance in Yemen, with over 800 staff delivering health, nutrition, water and sanitation services to more than a quarter-million people. Our mobile medical clinics travel to remote and hard-to-reach places to treat children at risk of hunger and disease. Each week, we provide 10,000 individuals with health services, offer nutrition assistance and treatment to 500 children, and provide cash transfers and food vouchers to 5,000 families.

“We took her for treatment. The IRC tested her, gave her injections, Plumpy’Nut, and medicines. She has recovered and is feeling better now.” —Rawiyah, a mother and IRC client whose daughter, Dima, was treated by an IRC mobile health team. Plumpy’Nut is a peanut-based paste used in emergency treatment of malnourished children.

Dima is a young girl in Yemen who was treated by IRC mobile health teams for cholera and malnutrition.
Photo: Kellie Ryan/IRC

Utilising our expertise and experience in the field, the IRC has developed a game-changing approach to combat acute malnutrition. Here is our three-pronged strategy:

The IRC believes the way forward is to create a single treatment program for all children with acute malnutrition. This combined approach will allow humanitarian organisations and U.N. agencies to work together to deliver care, reduce costs and, most importantly, save lives. With help from partners, the unified treatment approach has been tested in South Sudan and Kenya and is currently being piloted in Mali and Chad.

2. Bring treatment to children, instead of the other way around

Currently families must bring sick children to a health facility for treatment. Such journeys are almost impossible in conflict-ridden areas. In countries like Yemen, even health workers can’t get to facilities because of fighting; they themselves frequently come under attack.

Our solution is to bring treatment straight to the children in their homes and communities. The IRC has created intuitive tools that community health workers can use to diagnose acute malnutrition. These include a color-coded armband that anyone can use to measure upper-arm circumference, and scales for proper food dosages.

A research study in South Sudan found that community health workers were able to successfully treat over 90 percent of children with severe acute malnutrition using these two simple tools. The results far exceed the global standard for acute malnutrition treatment and are better than treatment within health facilities.

3. Scale up funding and the political will to save lives

Delivering care for acute malnutrition through a combined approach offers the promise of stretching every dollar available for treatment. Governments, policy makers and humanitarians around the globe can help ensure that these approaches become accepted practice and remain fully funded.

U.N. member countries that lead funding for humanitarian programs must prioritise efforts to end hunger. Famine is the price of inaction. With more foreign assistance, a heightened sense of urgency, and increased access to the most vulnerable, we can save millions of lives.

But if world leaders fail to muster the political will to end the war and violence at the root of this suffering, famine will loom in our future.