The trek for clean water

Families in Abyan, Yemen drink water from a well that was recently repaired by the International Rescue Committee in the midst of the widespread violence gripping the Middle East’s poorest country.

The IRC started providing clean water to local villages in southern Yemen in 2012. Even before the current conflict began, half of Yemen’s population was unable to access safe water. 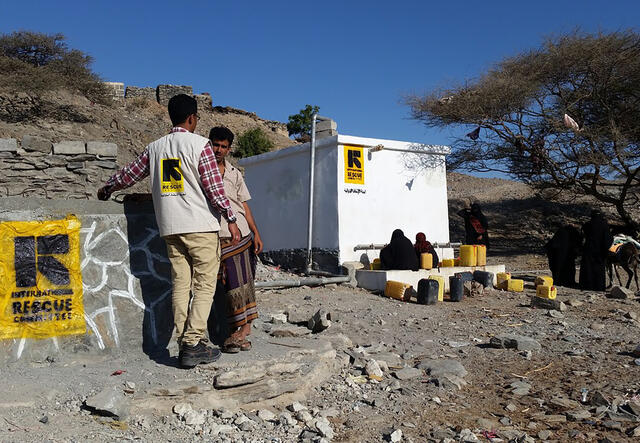 The IRC installed a water point for families displaced by Yemen's civil war. We have been working in Yemen since 2012, resuming our health, nutrition and sanitation assistance in the south in May 2015 after a month-long suspension. We are now looking to expand our programs to the northern part of the country.
Photo: Sahar Nuraddin/IRC

Many Yemenis in rural areas trek for hours on unpaved desert roads in search of water that is safe to drink. Even if they are lucky enough to find a well, it is likely to be contaminated with mud or dirt. Drinking from such polluted sources often leads to sickness and diarrhea, especially among children.

“It would get worse during the rainy season when there was flooding along the wadi (a normally dry ravine) and it would carry human and animal feces with it which would flow into the well,” says Mohammed Salem who lives in Alfishlah, a village in Abyan province that lacks latrines.

“We couldn’t use the well, and therefore my wife, my daughter and I suffered a lot when collecting water because we had to walk far and we couldn’t bathe at home.”

Mohammed says he and his family contracted cholera, diarrhoea and other diseases from drinking untreated water. The International Rescue Committee began fixing the open wells in Alfishlah and the surrounding area so that they could be safely used by both the villagers and their livestock.

We also trained volunteers from the community to raise awareness of safe hygiene practices – such as washing hands thoroughly and storing drinking water in clean, closed containers. Adopting healthy new habits has helped Alfishla’s residents and their neighbours avoid the spread of preventable diseases.

“The IRC made a big impact on our lives and taught us great things,” says Mohammed. “This project brought happiness to many families.”