The UK Government must help refugees from Ukraine

We’re calling on Home Secretary Priti Patel to do more to welcome refugees from Ukraine.

Since Russia invaded Ukraine on February 24, over 5 million people have now fled across borders to seek safety, in the fastest-growing humanitarian crisis Europe has seen since World War Two. Over 2.9 million people fleeing are ending up in bordering country Poland, where the IRC is responding to humanitarian needs.

What are the UK rules for refugees from Ukraine?

In response to the crisis in Ukraine, Home Secretary Priti Patel and the UK government have made various immigration concessions, including allowing Ukrainians to join family in the UK by applying for visas. However, the process can be hard to navigate for people fleeing. The Government has also launched a new humanitarian sponsorship scheme, which enables communities in the UK to support refugees from Ukraine - including non-Ukrainian nationals -  to live here. 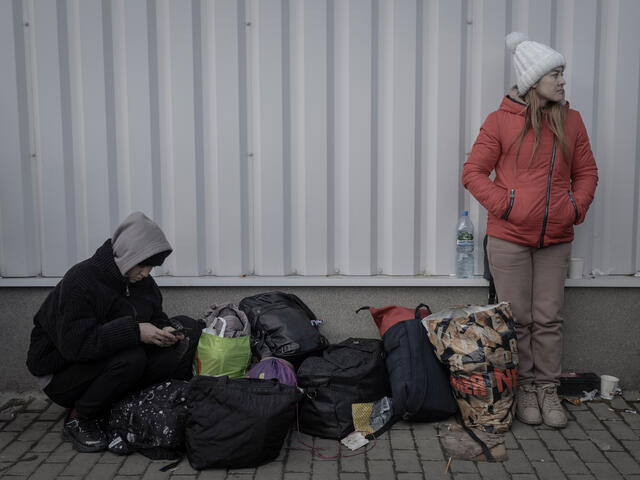 How many of Ukraine’s refugees have the UK supported?

As of 31st March, nearly 65,000 Ukrainians had applied for a visa to come to the UK. The UK government's website states that 29,200 visas have been issued.

The UK has an opportunity to step up and offer refuge to those who need it. The IRC is calling on Home Secretary Priti Patel to ensure safe passage for people fleeing Ukraine, and for the UK Government to work with other countries so that those fleeing the conflict– including non-Ukrainian nationals– are offered sanctuary in Britain.

The majority of people are seeking safety in countries neighbouring Ukraine. In Poland, Romania, Hungary, Slovakia and Moldova, refugees are arriving with only what they can carry. In many places, there are long waits to cross and limited facilities waiting for them on the other side, with temperatures dropping below freezing overnight. Neighbouring countries have shown great solidarity and kept their borders open to refugees, but resources are stretched. It is important that the UK is also able to offer protection to those in need.

We also know from decades of experience working with refugees that when people are forced to flee their homes, they are often vulnerable to traffickers and people ready to exploit them for profit. The majority of those fleeing Ukraine are women and children who are at a greater risk of exploitation during a crisis. 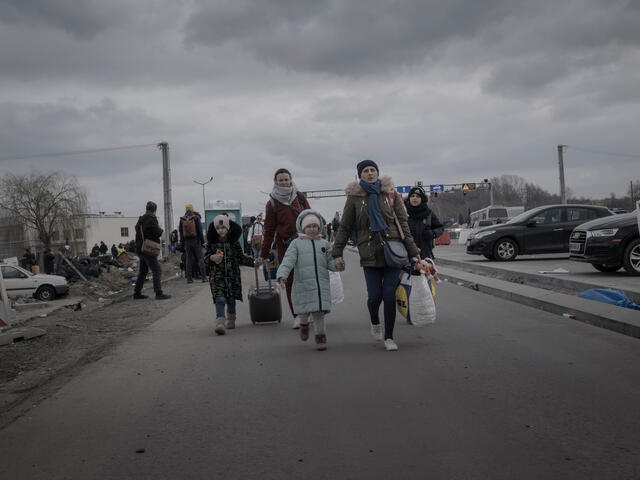 The U.S. Ambassador to the United Nations has warned that the Russian invasion could displace up to 5 million Ukrainians.
Photo: Francesco Pistilli/IRC

In order to fully support all refugees fleeing Ukraine, the UK Government must take further steps to protect civilians fleeing. We’re calling on Home Secretary Priti Patel to do the following:

The UK Government must offer safe routes to protection here in the UK, not just to Ukrainian nationals, but to people of all citizenship and nationalities who face grave dangers as the conflict escalates.

What does the UK Governments Nationality and Borders Bill mean for refugees from Ukraine?

The 1951 Refugee Convention, of which the UK is a signatory, stipulates that people can seek asylum in any country they choose. Once people arrive in the UK, they’ll go through a rigorous process during which their asylum cases are assessed before a decision is made on whether they are allowed to remain.

In May 2021, the UK Government announced the Nationality and Borders Bill, now in its final stages in Parliament, which seeks to overhaul the current asylum system.

However, many—including the IRC—believe that Home Secretary Priti Patel’s Nationality and Borders Bill undermines the UK’s obligation to give all who seek asylum a fair hearing on our soil by discriminating against refugees depending on how they reach our shores.

The IRC signed a joint letter in the Times with other organisations urging the government to rethink this harmful bill and uphold our proud record of helping those fleeing war and oppression.

What is the British public doing to help refugees from Ukraine?

The UK has a long history of welcoming refugees and as we often see in our work, it’s in times of crisis that humanity shines through. Brits from across the UK are doing what they can to support refugees from Ukraine. Through donating clothes and items to messages of welcome on social media. Many people are ready to welcome refugees from Ukraine to their communities with offers of spare rooms and beds shared all over social media feeds.

A team of volunteers work on a mountain of donations for Ukrainian refugees at a warehouse in Huyton this evening, organised by Polskie Merseyside #ukrainepic.twitter.com/L8CugfwCVT

£100 million raised in four days! Incredible fundraising efforts from the @decappeal to support the crisis in Ukraine & a remarkable response from the public.

The IRC is already working with resettled refugees in the UK from places including Syria and Afghanistan. If needed, we’re ready to support refugees from the Ukraine in the UK too.

The people of the UK are ready to welcome refugees from Ukraine, so the UK Government should be too. Add your name to send Home Secretary Priti Patel one clear message: refugees welcome, always.