War and hunger are destroying families in South Sudan

The world’s newest nation, South Sudan, has been ravaged by civil war and political infighting since 2013. After a peace agreement failed to unite the country last July, the conflict quickly spread to previously unaffected areas. That’s when the war came to Angelina Nyatuoy’s home in Mirmir, a small province of Panyijar County, located in South Sudan’s Unity state.

“What we saw was armed men,” says Angelina. “They came and started burning houses. We saw the vehicles full of men with guns. That is why we ran away.”

Wanting to protect his family and home, Angelina’s husband joined other men at the frontlines. He sacrificed his life, but stalled the armed men long enough for his family to escape. Angelina ran with her five children, barefoot through the swamplands for one and a half hours, and fled to a remote island where she hoped the violence would not follow. 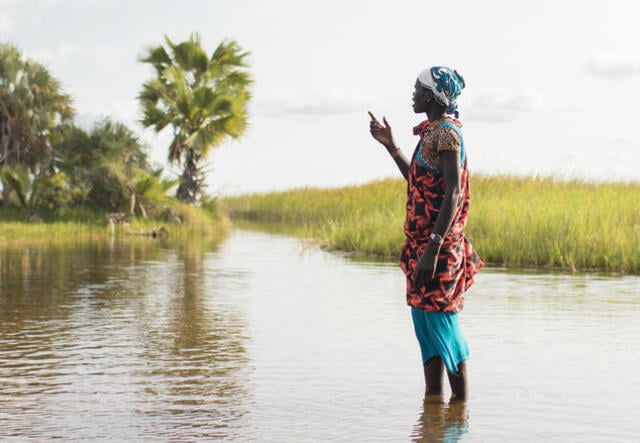 The fighting in South Sudan's Unity State has forced displaced people like this woman to try to survive on islands in the swamps with scant food and drinking water.
Photo: Kellie Ryan / IRC

After 24 hours, Angelina left her children in safe hands with relatives, and returned home to look for her husband. What she found has left her heartbroken ever since. “He was shot in the head,” she says. “When I saw his body, I was angry, and I started crying.” She gave him a proper burial near their home so he could rest in peace.

Back on the island, Angelina’s children and relatives struggled to sustain themselves. They didn’t have access to food, latrines or clean water. They resorted to eating water lilies, which stave off hunger pains but have no nutritional value.

Angelina’s relatives brought her children back to Mirmir, but she knew there was nothing left for them there. Her home had been ravaged by war, and her crops had been destroyed.They went searching for any sign of help, and came upon Kol, another province about one hour’s walking distance from their home. There they found a welcoming community willing to share their resources, and a nearby health clinic run by the International Rescue Committee. 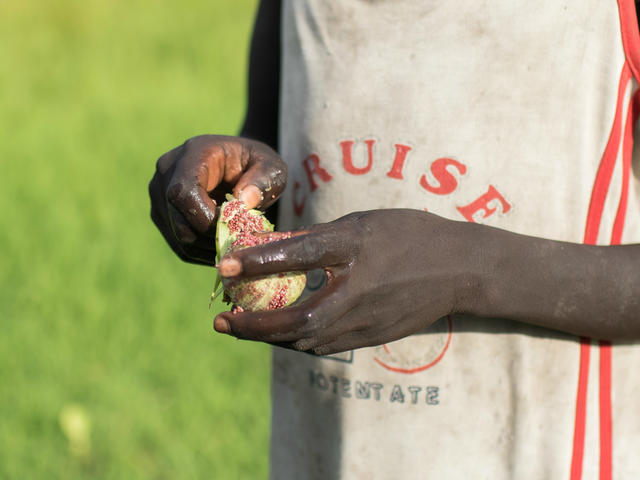 Many people who fled into the swamps to escape the fighting in Unity State try to survive by eating water lilies, which offer little nutritional value.
Photo: Kellie Ryan / IRC

Since 2014, the IRC has been providing health care services to Kol’s residents and displaced people who have been forced to flee their homes. The clinic helps many patients like Angelina who have been living on islands in the swamps without access to basic resources like food and water.

Upon arrival, Angelina’s two-year-old daughter Teresa was sick. She had sunken eyes and a distended belly, and she appeared meek and tired. She was diagnosed with severe acute malnutrition and immediately admitted into the IRC’s nutrition programme. Angelina watched as her daughter regained vibrancy, and her arms and legs began to fill out.

“Before she was in the nutrition programme, she was very sick,” she says. “When she was put in the programme and given Plumpy’Nut (a peanut paste), her body developed. Now she is healthy. I am happy with the IRC.”

A Search for Food and Safety 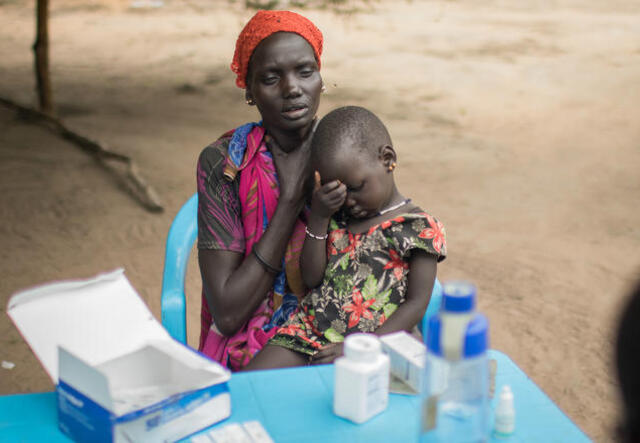 Angelina, with her listless daughter in her lap, describes their symptoms to IRC medical staff at the Kol clinic. Angelina has a fever and is diagnosed with a urinary tract infection, while her daughter has hunger pangs.
Photo: Kellie Ryan / IRC

Angelina and her children have been living in Kol for one year now. Despite help from the IRC, they still struggle to find adequate food.

As the civil war rages on, the people of South Sudan are regularly forced to flee their homes—or die trying to protect them. Those who find safety can never settle long enough to grow crops for food.

“When there was no fighting, we cultivated and grew crops,” Angelina says. “But now we are always scared … so no one is growing anymore.”

Food drops from the United Nations have also become less frequent due to funding constraints. “When the food drop is delayed, the hunger starts,” Angelina says. “The children cry because they don’t eat anything.”

Today, three-year-old Teresa has hunger pangs, as she has not eaten since the previous evening. She winces in pain, grabbing her head and gently laying it down on her mother’s lap to fall asleep. 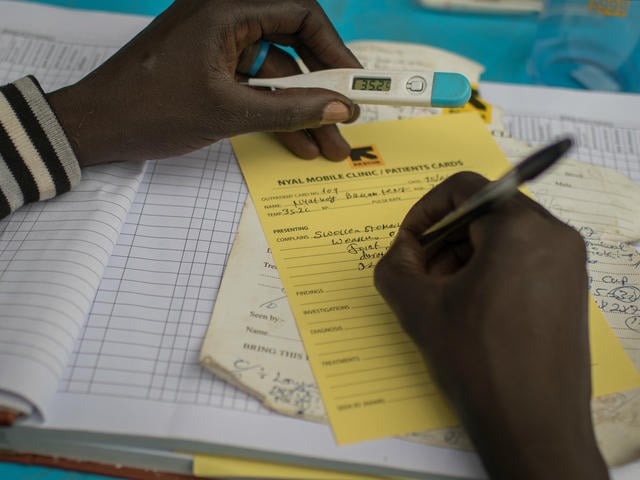 A health worker at an IRC medical clinic in Kol records a patient's temperature - the reading indicates she has a fever.
Photo: Kellie Ryan / IRC

Angelina herself has a fever and a urinary tract infection, a common condition for women during the rainy season.

After all they’ve been through, Angelina and her family still lack the basic necessities for living a dignified life. In fact, when asked what she would like from the outside world, all Angelina requests is simply a mosquito net and a pan in which to cook.

The IRC is scaling up its emergency response in South Sudan and across the region and calling for urgent increases in funding. Millions of lives—including a generation of children—depend on it. Donate now.