Early marriage: the price of childhood?

Thirteen-year-old Helena was abducted by her uncle at gunpoint in impoverished South Sudan. He sold her to another man so he could pay for his own wife, following a practice known as the “bride price.”

I tried to reason with them, but then they threatened me with a gun. She was given to a man for 15 cows.

My uncle took me and beat me, so that I would accept the marriage,” says Helena. She pleaded with the man who bought her to reconsider. “I am too young to marry you,” she told him. “I can’t do anything.”

But the marriage was consummated—by force. “He hit me in the head with a stick, and I collapsed,” says Helena. “Then he removed my underwear. He held a knife to my eyes and told me that he would slaughter me.”

Helena’s experience triggered painful memories for her mother, Rachel, who also was sold into marriage at a young age. “When I was young, a man came to my house,” she remembers, “and it was settled. He did not spend time getting to know us. I was given to him.” 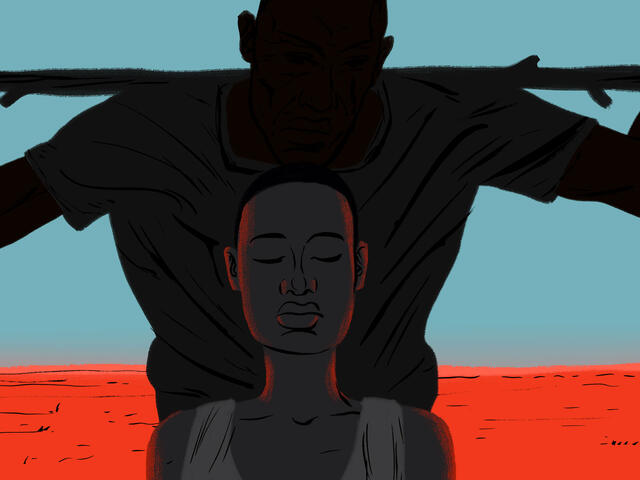 Rachel and Helena live in one of the poorest countries in a region racked by decades of civil war. Their stories reflect the life cycle of violence experienced by many women in South Sudan, where 65 percent report abuse by an intimate partner—double the global average. In countries with a high prevalence of early marriage, families are likely to marry off daughters to relieve financial burdens.

“I did not quarrel,” recalls Rachel about her forced marriage. But life became difficult, in part because she bore her husband four daughters, but no son. “If God had given me a boy, my life would not be like this. My husband was always off with a gun. He mistreated me a lot. When he died, the few goats and cattle we had were taken by his brother. That is common for widows like me. They come and take everything unless you have a son.”

Livestock is vital to survival in the region, a commodity, for some, more valuable than human life. Indeed, after her husband’s death. Rachel’s brother sold her first-born for five cows. The same fate would befall all her children, Helena being the last one bartered.

“My husband’s relatives came and said, ‘Now we want the girl to live with us,’” says Rachel. “I tried to reason with them, but then they threatened me with a gun. She was given to a man for 15 cows.”

Helena was forced to leave primary school. “I liked mathematics … and playing volleyball,” she says. “I liked to tell stories with my friends … and just be together.” After just one month, the girl ran.

There were injuries to my insides—it was very painful. I thought that my intestines would come out. I did not know what was happening.

“I escaped back to my mother,” says Helena, who couldn’t even walk by the time she arrived back to her town. “There were injuries to my insides—it was very painful. I thought that my intestines would come out. I did not know what was happening.”

Rachel took her to the police. "They filled out a report and took her to the hospital. The man was arrested, and is in prison now. My brother in law is also in jail. But I know they will be set free."

After a month of recovery, Helena and Rachel were sent to a woman’s clinic operated by the International Rescue Committee, where medical staff test for pregnancy and sexually transmitted diseases such as HIV. “They gave us soda and biscuits,” Rachel says. “They gave us underwear, slippers, seeds, a hoe and a rake.” 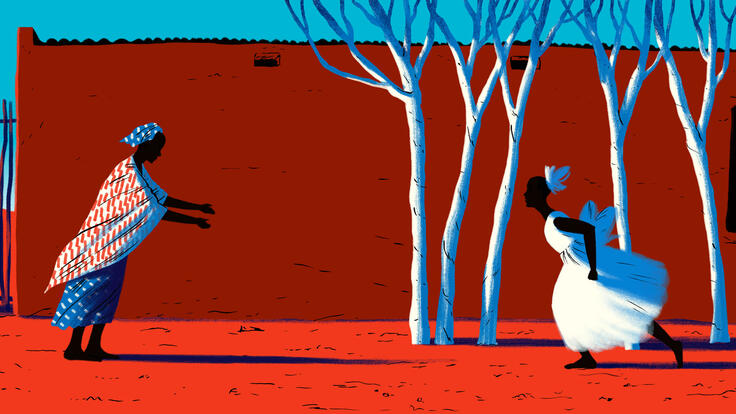 Rachel does not believe her brother in law or the man he sold Helena to will be punished for more that the debt owed. “Helena’s husband will pay a fine,” she says, “one or two cows for mistreating the girl. But the uncle will end up receiving them."

For nearly three decades, the IRC has been there, providing life-saving services for South Sudanese women and girls like Rachel and Helena.

For survivors of sexual assault, the IRC provides clinical care. To help women recover from trauma, we offer the psychosocial support they need to develop coping skills. And we create women’s safe spaces, which give women and adolescent girls an opportunity to share their experiences, learn new skills, and develop the social networks they need to face the adversities that life has in store for them.

Despite everything, with the right support women can overcome violence and trauma to rebuild their lives and those of their children.

Names have been changed. Illustrations by Paul Blow.

The IRC is proud to partner with The Global Women’s Institute as part of What Works to Prevent Violence Against Women and Girls, funded by the UK’s Department for International Development. Download our research from South Sudan on the situation of women and girls like Rachel and Helena.