What do people trapped in Ukrainian cities need?

Millions of people remain in danger and in need of urgent aid amid a significant increase in attacks on Ukraine’s cities—what's happening and how you can help.

Each day that passes, the Russia-Ukraine conflict brings more suffering. Nearly 4 million people have fled Ukraine since February 24, while 6.5 million have become internally displaced, making this the fastest and largest displacement crisis this century. Millions more are stuck in Mariupol, Chernihiv, Kharkiv, Mykolaiv, Sumy and other Ukrainian cities under attack, waiting for agreed “humanitarian corridors” to be safe enough to flee.

An estimated 12 million people are stranded or are unable to leave Ukraine due to increasing violence, destruction of bridges and roads, as well as lack of resources or information on where to find safety and accommodation.

As attacks on civilians continue, people unable to travel to safer parts of Ukraine or neighbouring countries are forced to shelter in subway stations and basements. Homes, schools and hospitals—including a children’s hospital and maternity ward in Mariupol—as well as a Mariupol theatre sheltering families, have been damaged. At the same time, evacuation corridors are being targeted, preventing people from leaving, and aid workers are being blocked from reaching those trapped and in need of assistance.

All of these are violations of international law.

The number of attacks and airstrikes have significantly increased in the last few days, putting the lives of civilians and humanitarian aid workers at risk and making it extremely difficult to access people who need support and assistance.

The IRC is calling for immediate local ceasefires and urgent humanitarian access to the hardest hit areas. “We’ve seen the humanitarian impact of not being able to reach people in besieged areas before and we must not allow the same to happen once again in Ukraine,” Kitchen said in an IRC statement, recalling the 3.4 million who were cut off from aid in hard-to-reach parts of Syria.

“As urban areas increasingly fall under siege, the IRC is doubly fearful of witnessing the same cruel tactics inflicted on the populations of Aleppo and Idlib across Ukraine.”

What Ukrainians need most

What do people in Ukraine need most right now? “Peace is the most important thing,” says Sasha Galkin, director of Right to Protection, a refugee assistance organisation and IRC partner in Ukraine. “We need some of these so-called green corridors to allow people to relocate from hotspots like Mariupol, like the Kyiv suburbs.”

“People need just to have freedom of movement in order to leave these places,” he told NPR. “And then, of course, the next step—just to relocate and [be] safe.”

As in any conflict, civilians continue to bear the brunt—both within Ukraine as well as those that have fled from the country.

“Families are having to make terrible decisions about whether to send their kids with neighbours or relatives to safety while they stay and try to protect their home and their belongings,” says the IRC’s Bob Kitchen. “Otherwise, people are picking up whatever they can carry, the clothes on their back, and are trying to make their way across the country through increasing danger as they move.” 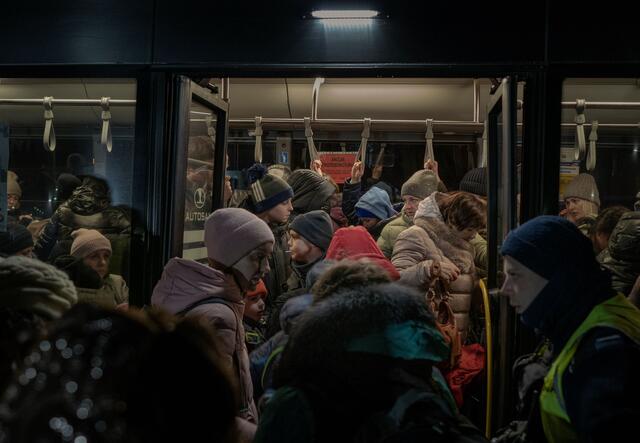 Refugees from Ukraine board a bus at the Medyka border crossing, Poland. The IRC and our partners in Poland are providing emergency support.
Photo: Francesco Pistilli for IRC

The IRC is particularly concerned for the safety of the many women and children who are becoming displaced within Ukraine or fleeing to other countries.

“This is like nothing we’ve ever seen before—the speed of displacement is unprecedented and the humanitarian needs are soaring each day, especially for women, children and the elderly that make up the majority of those displaced,” says Heather Macey, IRC emergency team lead in Poland. “We’ve seen that people are arriving at the Polish border, with goodwill and intent, offering homes and transport to people who have fled the crisis, but this of course poses a massive security risk for vulnerable people who could fall victim to crime, exploitation or trafficking.”

We are calling on world leaders to prioritise support and protection services for them in what has become the worst humanitarian crisis Europe has seen in decades.

How is the IRC helping inside Ukraine?

The IRC is working with local partners like Right to Protection to provide information on registration for displaced people, housing, employment and refugee rights, as well as psychological support, through a dedicated hotline. Together we’re also providing emergency assistance—including cash, groceries, cook stoves, warm clothes, sleeping bags and blankets—to people displaced from their homes.

We’re also providing evacuation services for people trying to leave besieged areas. “We collect information [on] how they can reach safer places and then provide it through our Facebook, through our hotline,” says Sasha Galkin of Right to Protection. “People call and ask various questions ...  How I can actually leave Dnipro? …  If I go to Poland, what I can expect there?”

How is the IRC helping Ukrainian refugees?

Of the more than 3.5 million people from Ukraine who have become refugees, over 2 million have fled to Poland.

“People are arriving freezing cold and exhausted and traumatised,” says Bob Kitchen. “And organisations like the IRC are there to welcome them to give them basic supplies, warm clothes, blankets, and … start giving the information and the trauma counselling that they need to make decisions about where they’re going to go next and what they’re going to do.”

The IRC’s teams on the ground in Poland are working with local partners to provide psychological support and legal counselling, and have also distributed medical supplies, sleeping bags and other essentials. Our partners are also providing refugees arriving from Ukraine with vital information through an existing hotline and—with support from social workers, interpreters, and cultural assistants—connecting them to the services they need. 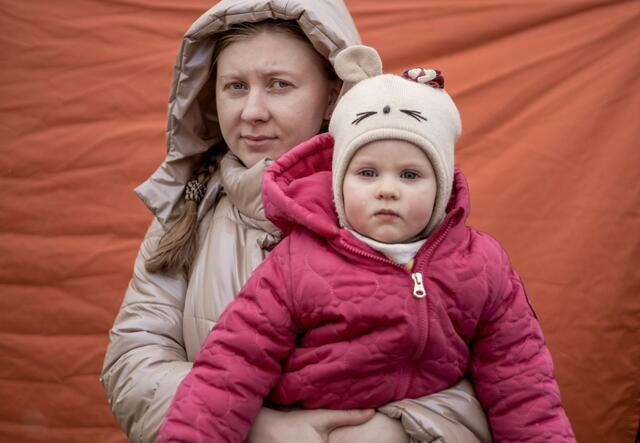 “It is difficult to describe how scary it is to hear sirens all the time," Iryna, who fled to Poland with her daughter and her sister's family, told the IRC. "We had to go to basements and shelters several times a day."
Photo: Francesco Pistilli/IRC

After crossing the border, many refugees are heading to Poland’s largest cities and finding their Ukrainian currency has become so devalued they are unable to afford to buy the things they need.

“The scale of humanitarian assistance that’s required is huge and it is gaining pace in cities like Warsaw and Krakow where … we’re starting to get programmes in place to distribute cash so people can make their own decisions about what their needs are and how to fulfill them,” says Kitchen.

“The whole system is gearing up, bracing for impact with so many more people on the way.”