What do Syrians need after the Idlib attack?

The International Rescue Committee is horrified at the scenes from Idlib province, northern Syria, where around 100 people—including children—are reported dead after a suspected chemical gas attack on April 4.

This atrocity is only the latest in a series of attacks on the 2 million people now living in Idlib--including 700,000 who had already fled fighting in other parts of Syria. What's worse, the attack happened during the latest declared ceasefire in a six-year-long war with no end in sight.

What do Syrians need in the wake of the Idlib attack?

It is thought that another 500 people were injured in the April 4 attack in Khan Sheikhoun in southern Idlib. Doctors on the scene confirmed that their symptoms were similar to those of survivors of the Sarin attack in Ghouta, a suburb of the Syrian capital Damascus, in 2013. Sarin is a banned nerve agent that makes it extremely difficult for victims to breathe, often resulting in death—children are particularly vulnerable. 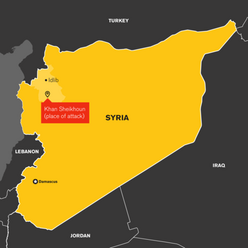 Emergency responders were overwhelmed by the scale of the attack: The local hospital had been bombed the previous day and patients had to be sent by ambulance to health facilities outside the area that were less prepared to respond to chemical attacks. And some paramedics did not have the protective clothing needed to avoid contamination when they came in contact with affected patients.

Doctors at the IRC-supported hospital in the city of Idlib, some 50 miles away, rushed to save lives despite the constant threat of their own facility being targeted by attacks. These physicians, from IRC partner Syrian Expatriate Medical Association (SEMA), were trained in how to treat people affected by nerve agents, and they were able to draw from the hospital’s stockpile of antidotes and use ventilators and other specialised equipment. The ten attack victims they treated are now in a stable condition thanks to the hospital team’s preparedness and expert care.

The IRC continues to prioritise training combined with emergency preparedness and planning for our health teams and partners in Idlib. Last year the IRC reached more than 300,000 people in Idlib with lifesaving health care, mainly through two primary clinics, two mobile clinics, and seven partner clinics and hospitals. We trained clinic staff and community health workers on how to respond to chemical attacks, and these local health workers in turn taught people in their communities how to protect themselves from contamination. 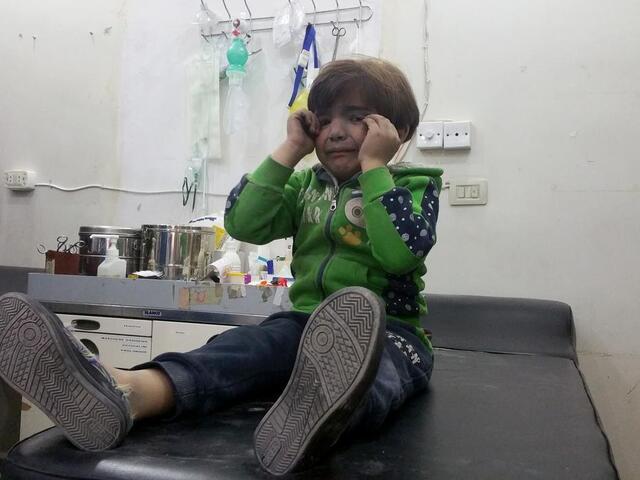 A Syrian child receives treatment at a hospital in the town of Maaret al-Noman following a suspected chemical gas attack on April 4. The attack took place in the town of Khan Sheikhoun in Syria’s northern Idlib province.
Photo: MOHAMED AL-BAKOUR/AFP/Getty Images

We have seen first-hand the immense cost to people’s physical and mental health from living in a war zone. We have met people not only injured by chemical weapons and bombs, but who have suffered unnecessarily because attacks on medical centres left them without health care, or because they could not access the medicine and food they desperately needed. Also, people with chronic illnesses such as diabetes, high blood pressure and asthma have seen their health deteriorate because of lack of medicine, medical care and sufficient food.

What’s still needed? With more funds the IRC could ensure that more health facilities in Idlib have enough protective clothing, antidotes, ventilators, and other necessary medical supplies and equipment, as well as the training medical providers and first responders need to respond to any future attack. We could also support our local partners’ lifesaving ambulance services.

A ceasefire brokered at the end of December has not reduced the violence in much of Syria. Airstrikes continue to be a major threat to civilians and aid workers alike. In 2016, eight IRC-supported medical facilities were attacked in Syria, and the majority of these attacks occurred in Idlib.

The IRC is concerned that as the Syrian government continues to force more and more people it considers “terrorists” to Idlib the province will increasingly become a place without protection. Among the displaced Syrians now living in Idlib are the tens of thousands of people who fled the siege of Aleppo. Only months ago the IRC warned that the must not face the same abuses in Idlib that they endured in their embattled city. 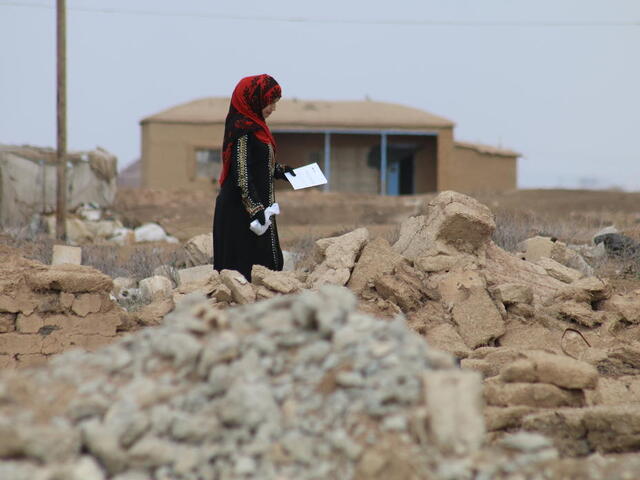 A woman walks home after picking up a prescription from an IRC mobile clinic providing healthcare in rural northeastern Syria. The IRC is helping 3,500 primary and secondary school children in Idlib to cope with the hardships of war so that they can learn and thrive.
Photo: IRC

Beyond airstrikes, clashes between other armed groups in Idlib endanger civilians and hinder aid.

What’s still needed? The suspected chemical gas attack in Idlib is further proof that the current ceasefire is a ceasefire in name only. The IRC and other aid organisations are calling on the United Nations Security Council to investigate this latest atrocity and hold the perpetrators to account.

Civilians, hospitals and schools must be safe from airstrikes and clashes on the ground, and humanitarians must have safe access to deliver aid. Attacks on civilians violate international humanitarian law. Until the law is enforced the people of Idlib will only see more death and suffering.

Some 700,000 displaced people are living in Idlib and many have been forced to flee violence multiple times before. A great many will have lost their sources of income and used up their savings—hundreds of thousands live in overcrowded conditions in tent settlements or unfinished buildings.

As residents of Aleppo arrived in and around the town of al-Dana in eastern Idlib earlier this year after government forces retook their neighborhoods, the IRC provided emergency cash benefiting nearly 12,000 people. Families received $100 so they could pay rent, buy food and purchase other essential items. They have told us that cash is by far the most useful form of assistance they have received--before many were forced to sell clothes and blankets given as aid in order to buy food, pay rent or get specialist medical care. Over the past year more than 50,000 displaced people in Idlib have benefited from emergency cash payments, which they receive through a local money transfer agent called a hawala.

The IRC is also giving support to Idlib residents. In March, we provided some 150 farmers money to buy wheat and barley for planting their staple crops. Later this year, we will also provide seeds, fertiliser and cash to pay for irrigation services to 1,000 farmers in central Idlib, in time for the summer planting season. 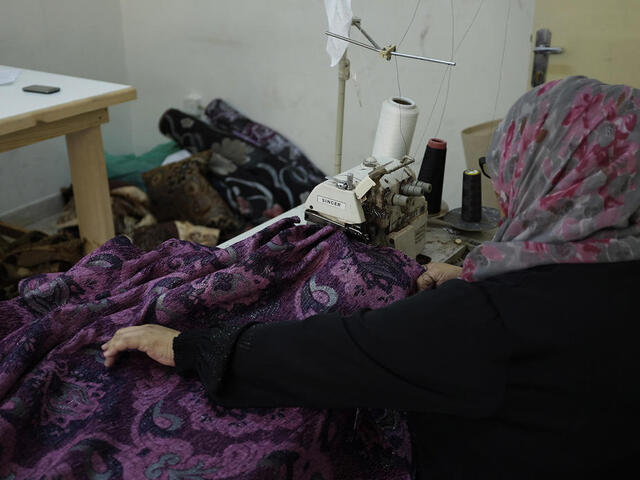 Far too many people uprooted by Syria's war have lost their sources of income and used up their savings. This woman received a start-up grant from the IRC to help rebuild her family's upholstery business after they fled to Jordan.
Photo: Timea Fauszt / IRC

The IRC also runs two livelihood centers in Idlib that each year help around 2,000 young Syrians (most are under 30) boost their income and find more regular work through training, apprenticeships and business start-up grants. Vocational training in areas such as car repair, tailoring, hairdressing and make-up, and mobile phone repair are paired with courses in communications skills, timekeeping and management basics to help employees succeed at work. Last year, the IRC also covered the salaries of some 200 apprentices for 70 days to help them get a toehold in local businesses.

We also awarded 65 business start-up grants (ranging from $400 to $700) to aspiring entrepreneurs in Idlib. These grants are used to invest in a wide range of opportunities, including the raising and selling of sheep. Recipients of the grant are coached by IRC staff with direct experience in developing business strategies, marketing plans and other techniques essential for new ventures to succeed.

The IRC is also able to provide an income to around 500 people each year through short-term jobs that include renovating schools, clearing rubble from buildings damaged by airstrikes, harvesting crops and knitting warm clothing to be donated to vulnerable families.

What’s still needed? All over Syria people continue to suffer because of the continued risk of violence and a lack of aid, including food, water and the money they need to support themselves. Because of the war, the country’s employment rate fell to 53% by the end of 2015 and some 85% of people are now living in poverty.

Aid workers need safe routes to reach all 13.5 million in need of humanitarian assistance. Homes, businesses and markets need to be safe from attacks. And, ultimately, people need safety and peace in order to rebuild their lives and livelihoods.

IRC classrooms have provided safety and stability to 3,500 children in five schools in Darkoush, western Idlib. Over a quarter of these children have been displaced from their homes elsewhere in Syria. Many have known nothing but war and, according to a new IRC survey, some are a full six years behind in their studies.

Uprooted children and those trapped inside war zones grow up with violence and neglect that can lead to toxic stress. They experience lower academic achievement, future unemployment, depression and violence. And without access to high-quality early learning programmes, they are less likely to have the skills they need to support themselves and also help rebuild their communities. But children are resilient, and the damage can be reduced if they are reached early. 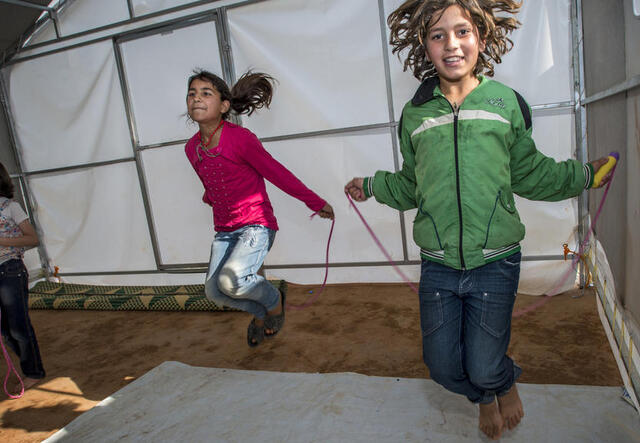 Girls jump rope at an IRC-supported school in Idlib. The IRC is providing 3,500 primary and secondary school students in the province with safe, quality education to enable them to cope with the hardships of war so that they can heal, learn and thrive.
Photo: Peter Biro / IRC

The IRC is providing primary and secondary school students with safe, quality education to enable them to heal, learn and thrive. Our 170 teachers provide classes that include Arabic, math, social studies, art, and sports. This semester, they will also lead social and emotional learning classes for students in grades 1 through 8, using lesson plans developed by the IRC to equip children with the critical skills they need to do well in school and in life: such as conflict resolution, perseverance and control of their emotions.

We’re also teaching parents techniques to help their children feel safe and protected despite the violence and uncertainty in their lives, and providing educators with training to identify and assist vulnerable children in need of specialised support.

What’s still needed?  Some 1.75 million children and youth in Syria are missing out on school because of displacement and insecurity, with more at risk of dropping out. A third of schools are damaged or unusable, and 150,000 educators have left their school systems.

Children need to be safe from violence and their schools not made a target of attacks. They need specialised support to cope with the hardship and stress of war in order to heal, learn, grow and ultimately thrive.

The world hopes that a countrywide truce can be agreed to end the indiscriminate air attacks, barrel bombs and fighting that have killed some 400,000 people. The only fully effective way to improve the lives of ordinary Syrians is to provide a political solution and to bring the conflict to an end. This will require an intensity of political will and diplomatic effort, and ultimately compromise that has not yet been applied in six years of war.

In the wake of a U.S. airstrike on Syrian military targets on April 6 in response to the chemical weapons attack, IRC David president Miliband said, "the question we have for all those engaged in military action in Syria concerns their plan to stop the killing and build a durable peace."

The International Rescue Committee has been delivering aid to Syrians trapped by violence since 2012. Today we are providing relief to millions of uprooted people in war-torn Syria and other countries in crisis; in Europe, where refugees continue to seek safety; and in our 28 resettlement offices in the United States. You can support our work rescuing lives.