Why drought can't drive this Ethiopian family from their home

Sheyte Amdu, a 25-year-old farmer and mother living in southwest Ethiopia, would start her search for water at midnight, walking for hours in search of puddles that hadn’t yet dried up, or else committing to the grueling 12-hour round trip with her donkey to the nearest working water point.

In drought-stricken Ethiopia, more than 10 million lives hang in the balance of uncertain weather patterns. The current dry spell, which has lasted 18 months and is linked to the global phenomenon El Niño, has disrupted crop cycles, leading to severe food shortages and loss of income. 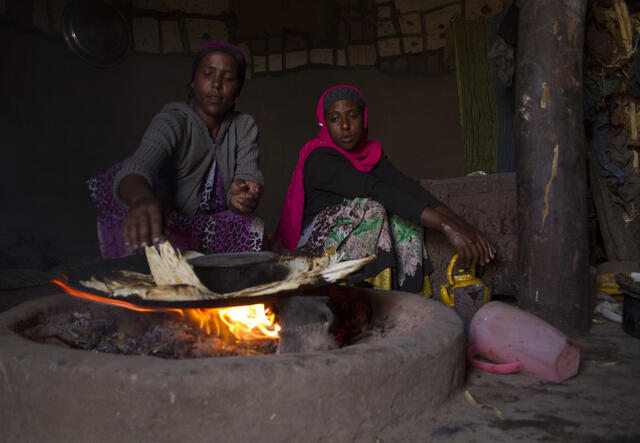 Sheyte Amdu, 25 and Zuifa Abdela, 24 prepare food in their village in a drought-stricken region of Ethiopia. “If it wasn’t for this water, I would be displaced,” Sheyte said referring to a water point closer to her home built by the IRC.
Photo: Tyler Jump

Drought impacts more than just agriculture and the economy. Children are pulled out of school to help collect water for their families, driving school dropout rates in parched regions of Ethiopia up 20 percent or more. In addition, health centres cannot function adequately, and women are forced to put themselves in situations that threaten their safety.

“Without water, I could do nothing,” says Sheyte, who used to harvest maize and other staples. Sheyte’s farm hasn’t grown a crop in more than a year, producing only empty stomachs and empty wallets. Today, she depends on government food aid to survive.

There has been some good news for Sheyte and her family, however. In 2014, the International Rescue Committee rehabilitated the village’s water point, bringing a derelict pump back to life. The project immediately turned a full day’s chore into a safe and easy 10-minute task.

With water much closer to home, children in Sheyte’s village have returned to school—the drop-out rate fell to 1 percent—and officials are now able to provide free lunches to students. The community’s health care programmes have expanded and become more reliable. Most importantly, women and children who are traditionally tasked to collect water, no longer need to trek in darkness through remote parts of the country, vulnerable to attacks by hyenas. Pregnant women no longer need to fear going into labour miles from home while searching for water. 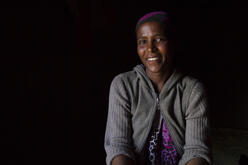 For Sheyte and her family, the rehabilitated water point means they can stay in their home.
Photo: Tyler Jump

For Sheyte and her family, the rehabilitated water point means they can stay in their home.  “We would have been displaced,” she says. “The availability of water is the one thing that helped us stay here.”

She is grateful to the IRC, the government and all the organisations that have helped to sustain life in time of crisis. She hopes one day, once the drought ends, they can start to earn a living again from farming. But for now, she says, “There is water in the school, there is food in the school, and children can continue with their education.”

Asked to describe the effect the rehabilitated water point has had on her life, Sheyte doesn’t hesitate. “Big happiness,” she says, smiling broadly. “Clean water means our life is also clean. Our children are clean. When our children have safe water, they are safe.”