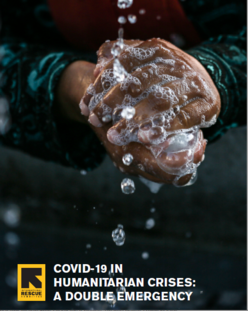 The International Rescue Committee’s analysis and approach to COVID-19 draws on decades of experience as a humanitarian and health responder in the world’s most complex crises, including as one of the largest responders to the Ebola outbreaks in West Africa and the Democratic Republic of Congo and cholera in Yemen—the largest outbreaks of the diseases in modern history. The IRC’s experience finds conflict-affected and fragile countries face a double emergency:

COVID-19 is in the early stages of spreading to less developed and fragile countries, which means there is still time to mount a coordinated response that can ease suffering today and guard against dangerous secondary impacts tomorrow. But the time to act is now.  Protracted economic, political and security crises have rendered many countries ill-equipped to respond to the disease.

The four countries discussed in this report—South Sudan, Syria, Venezuela and Yemen—as well as camps for displaced populations around the world have weakened health systems unable to meet existing needs. Nearly half (46%) of the people in those four countries already lack access to basic health services. While the United States and Europe face shortages of ventilators, intensive care units and protective equipment, many conflict-affected and fragile countries have virtually none to begin with: