The events from the past few weeks have shown that the fight to end violence against women and girls is universal.

Women and girls caught up in conflict and crisis are at the sharp end of that fight, with 1 in 5 having suffered sexual violence. Crises by themselves do not cause violence against women and girls, but they accelerate many of the underlying drivers, while public services and social networks collapse. 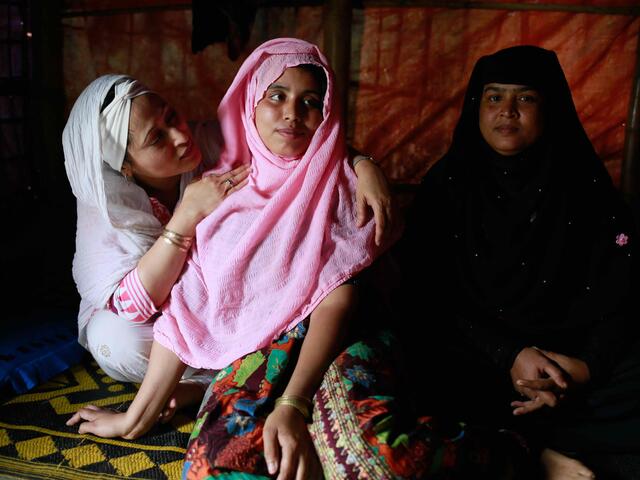 Rohingya activist and lawyer Razia Sultana campaigns for the rights of Rohingya women, running her own women's centre in Ukhiya camp in Cox's Bazar, Bangladesh and helping to empower women in the camp to understand their rights.
Photo: Habiba Nowrose /IRC

More must be done to tackle the root causes of violence against women such as gender inequality. From equal opportunities for education and work to including women in decision making at all levels of governance.

The safety of women and girls is still not prioritised globally. The UK is making huge cuts - up to 70% - to its global aid budget, which will disproportionately impact women and girls who are already vulnerable from fleeing conflict or displaced by climate change.

Adequate funding and tailored support, driven by the needs and aspirations of the women themselves, are all essential to ensuring women and girls in all their diversity are able to live their lives free from violence.

Women and girls of ethnic minorities face multiple forms of oppression, which further reduce their power and choice. They are at increased risk of violence and face increased barriers to accessing support and recovering. The surging Black Lives Matter movement around the globe has thrown into stark relief just how critically important it is, especially for women, and particularly women of colour, that we do not just get back to “normal,” but that we actively build back better.

Safety is just the first step in the journey to gender equality.

Five ways we can make women and girls feel safer around the world.

Increase funding to end violence against women and girls.

The coronavirus pandemic has derailed progress that has been made towards gender equality. Reports of violence against women increased over the past year, as many women and girls have been locked down in their homes with their abusers, isolated from support networks and services. The closure of schools and loss of jobs around the world have all contributed to the ‘shadow pandemic’ of gender-based violence that’s spread across the world. 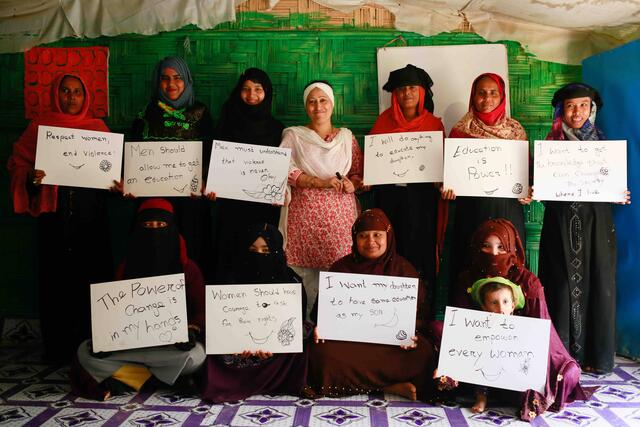 Activist and lawyer Razia Sultana stands with women at her women’s centre in Ukhiya camp, Cox's Bazar in Bangladesh. Razia works tirelessly to ensure that the crimes against the Rohingya by the Myanmar military - particularly rape against thousands of women - are brought to justice.
Photo: Habiba Nowrose/IRC

Less than 1% percent of humanitarian funding worldwide goes toward programmes to prevent and respond to gender-based violence.

The UK government can make a difference to women and girls displaced by conflict and crisis by increasing funding for survivors or those at risk of gender-based violence to access lifesaving programmes, such as IRC Safe Spaces. 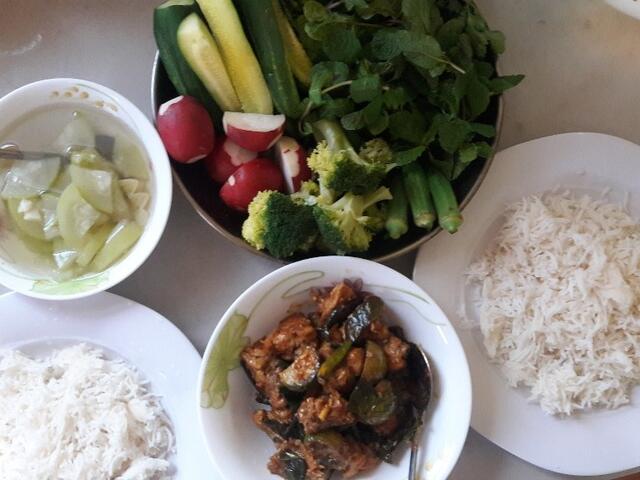 The pandemic has left 20 million girls at risk of not returning to school. When girls in crisis countries enter school, many do not finish due to early marriage, teenage pregnancy, or the obligation to take on household chores. 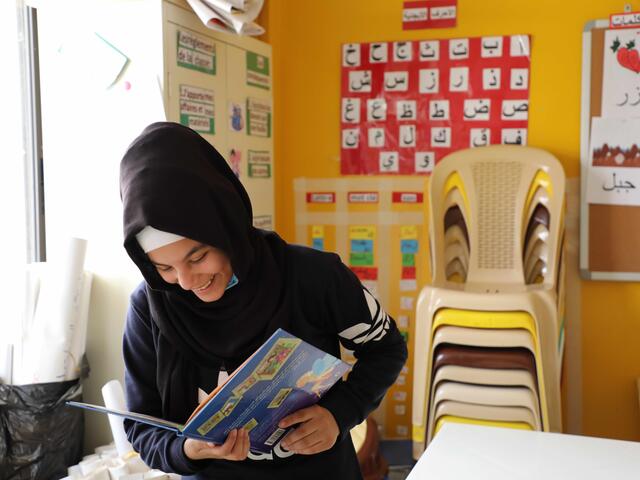 Widad shares what she has learnt at the IRC run safe spaces in Northern Lebanon where Syrian girls can get an education and receive emotional support to recover from the trauma of war.
Photo: Elias El Beam/IRC

43% of girls in Nigeria, 37% in the DRC and 40% of girls in Ethiopia are subject to child marriage. As schools in crisis-affected areas close due to COVID-19, the situation could worsen: half of refugee girls may not return to the classroom.

The barriers to girls’ education must be addressed, including gender-based violence and access to sexual and reproductive health services. By keeping girls in school they have greater safety and security, better health and education, and more control over life choices and decisions. 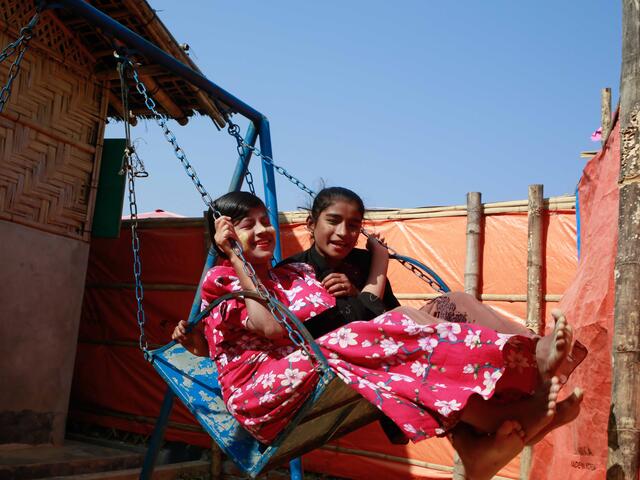 Rubijan and Nur Kaida play on a swing outside the IRC's Women's Centre in Teknaf refugee camp in Bangladesh, where girls learn about their rights and have space where they can be safe and play.
Photo: Habiba Nowrose /IRC

The pandemic has seen more women lose their jobs than men, as they are employed in sectors more likely to be impacted by lockdown. The pandemic has also spotlighted the disproportionate impacts of unpaid caregiving on women. The economic marginalisation of women is intensified by violence, crisis and displacement.

When women have economic opportunities, it can enhance their status in their households and communities. Safe and decent work relies on freedom from violence, harassment and discriminatory norms. 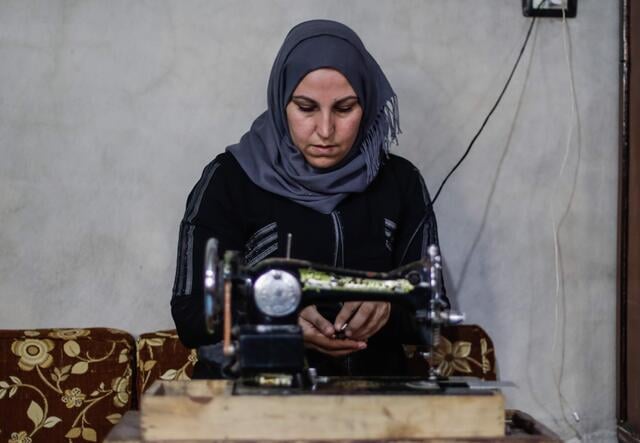 Um Abdo in Syria used to make clothes before the pandemic, now she's turned her skills to creating masks that the IRC gives out to the community for free.
Photo: AHammam/IRC

Women everywhere require safety at work and freedom from discrimination, harassment and violence in order to safely generate an income. Women affected by conflict and displacement also suffer trauma, restrictions on their movement as well as unequal access to the labour market and financial services. Women’s economic empowerment in contexts affected by crisis and displacement must address these intersecting barriers to economic opportunities.

Include women and girls in decision making

Women and girls remain marginalised in crisis response plans and recovery efforts. This stems from the fact that women are often under-represented in leadership and planning around humanitarian crises.

The meaningful participation of women and girls at all levels--and of all backgrounds--is vital to safeguard progress on gender equality, to build back better after Covid-19, and promote more inclusive societies. 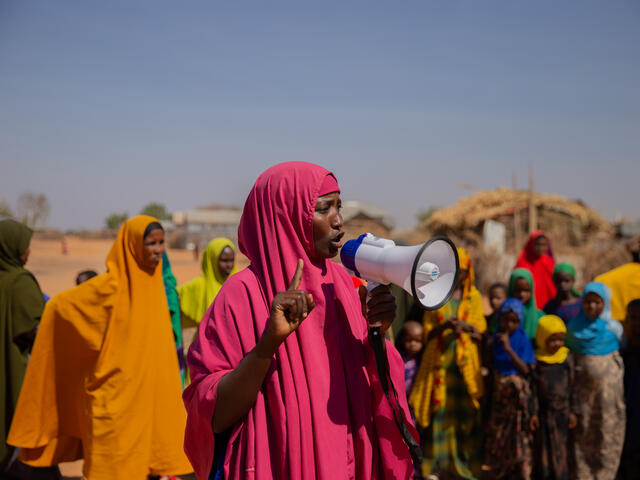 To do this, we must begin changing our ideas of what leadership looks like and remove the barriers for women and girls to lead and participate in decision-making on all levels.

We need to create more equitable leadership in crisis planning and response. Women led groups working in their communities are essential in identifying and providing a platform for current and future leaders in conflict and crisis-affected settings. 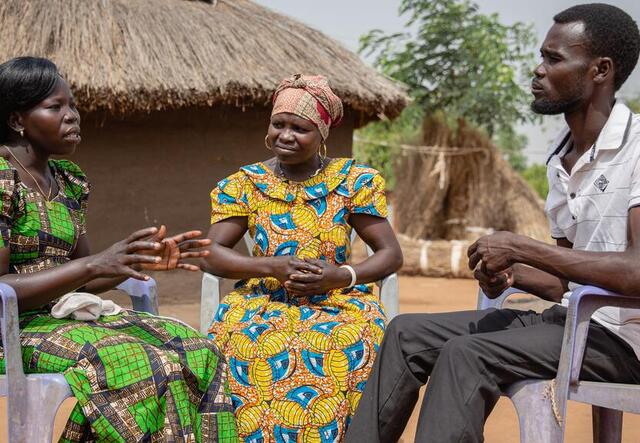 Change is not going to happen without engaging men to challenge gender-inequality that is deeply rooted in societal attitudes, beliefs and behaviours, including stigma towards survivors of gender-based violence.

By engaging men in examining destructive notions of masculinity, gender and power, attitudes, beliefs and behaviours can change, as more and more male allies actively practice and promote gender equality in their daily lives.

Male engagement on gender equality should always be guided by and accountable to the affected women and girls.

How you can help end violence against women and girls

Speak out - Call on the government to do more at key moments in 2021, and increase funding for initiatives that end violence against women and girls and help survivors recover.

Get involved - Volunteer for local and national crisis hotlines or reach out to shelters within your community to find out how you can best support them.

Give what you can - Donate to organisations such as the IRC that work with local women-led organisations to tackle the root cause of violence—gender inequality—and not just the symptoms.