After fleeing war in Iraq, this footballing teenager has his sights set on one goal

Football is nearly always on Sami’s mind. As he strolls across the dusty camp in Greece, he explains that becoming a player is his passion.

‘I only think about football – all my mind is football,’ he says, calling himself ‘football-crazy’.

Meeting eighteen-year-old Sami*, you can see that he is carrying heaviness on his shoulders, but there is pride and determination in the way he holds his head and looks directly in people’s eyes.

When asked about his daily life in the camp, his answers are minimal: ‘It is okay,’ he says numbly, with a shrug.

He lives at an IRC Safe Zone where he attends Greek lessons, plays football or kicks back at the nearby cafe. 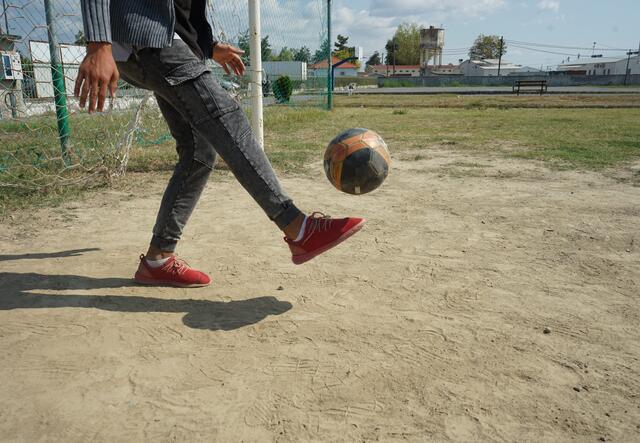 Sami practices football every day in a football pitch near the refugee camp.
Photo: IRC/Lucie Horton

He reveals that the emotional weight he’s bearing is the loss of his four brothers, including his twin. ‘My twin, he was my everything, when he was with me, he gave me hope.’

‘I lost my brothers, I lost my twin,’ he says. ‘They were all killed in the war. I’ve spent many days and nights so sad, it is beyond difficult,’ he says.

At the Safe Zone, Sami receives therapy from an on-site psychologist and support from case workers to help him rebuild his life after this unimaginable trauma. The IRC also helps Sami with his education and enrolment into school. After everything he's been through, this support gives Sami the chance to rescue his own future. 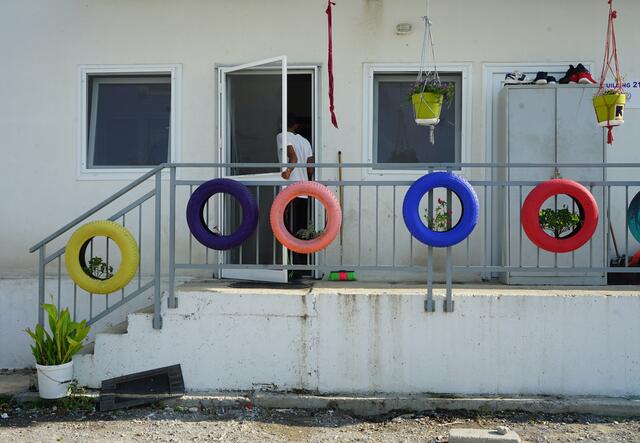 The Safe Zone in Greece is decorated with plants sitting in tyres, which the children painted themselves.
Photo: IRC/Lucie Horton

Sami left Iraq and arrived in Greece in November 2017 after spending seven nights walking by foot from Turkey. He slept in the day and awoke at night to trek across the border.

On arrival, he presented himself to the police and was registered at a refugee camp. It was here he met his two best friends who Sami still sees despite living in a different area.

‘These friends, they are like my brothers. I go to see them or they come to see me here. When we reach each other we forget about our problems and bad memories.’

These friends are not the only people who have shown Sami humanity. One month ago, at a hospital in Greece, he met a woman who lived in England. Her young son and Sami started talking about their shared love of football. A few days later, the woman turned up at the camp looking for him. She’d brought him football boots. ‘She made me feel respected,’ he says. This stranger’s small act of humanity has stayed with Sami – helping to restore his hope and dignity at a time when he needed it the most.

Sami’s played football since he was 6 years old. Back in Iraq, he used to play with his twin. A fan of Barcelona and Liverpool – his favourite players are Mohamed Salah and Lionel Messi – and he watches all the games on his phone. 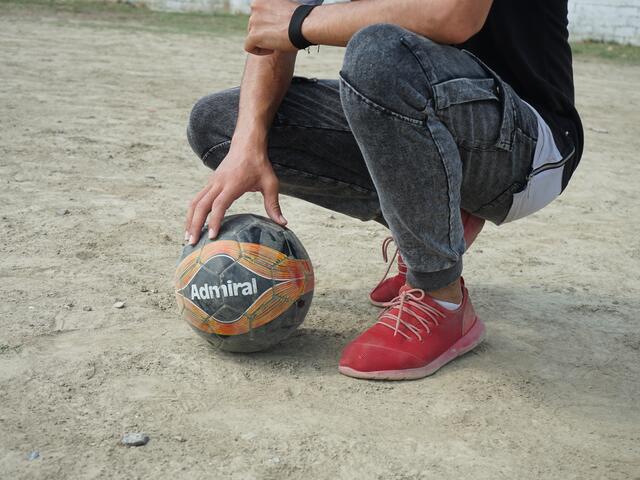 Sami lost his twin and three other brothers in the war before he fled in search of a brighter future.
Photo: IRC/Lucie Horton

‘There is not a future here for me to be a professional footballer,’ he says. With his sights set firmly on making it, his next step is to get to Germany, where he’s hoping he’ll be able to unite with family and join a good team. But now, it’s a waiting game whilst his papers are checked. An IRC lawyer is helping Sami navigate the complicated asylum system.

‘My dream is to be a footballer because I want to give back to my father and my mother. I’ve lost my brothers so now I am the only one. I want to be something - so that they can have some pleasure in life.’

Funded by ECHO EU Humanitarian Aid, the International Rescue Committee, the Greek Council of Refugees and other partners provide Sami and children like him with 24/7 care and shelter at the Safe Zone. Our support enables them to begin to recover from trauma by working with psychologists and social workers. Our on-site lawyer also helps children to navigate the asylum system, providing them with vital help so they can claim their rights to safety.