Today, as South Sudan marks the anniversary of its independence, the new nation is engulfed by a growing humanitarian crisis. Hopes for a peaceful future expressed four years ago are now dashed. Thousands of people have been killed, and more than two million uprooted from their homes by civil war. Unspeakable atrocities have been committed by all parties to the conflict.

The International Rescue Committee (IRC) is providing urgently needed medical care, clean water, protection for vulnerable women and girls, and other assistance. We are working in the hardest hit areas, including parts of Unity State where the IRC has been the largest aid agency on the ground for 20 years. 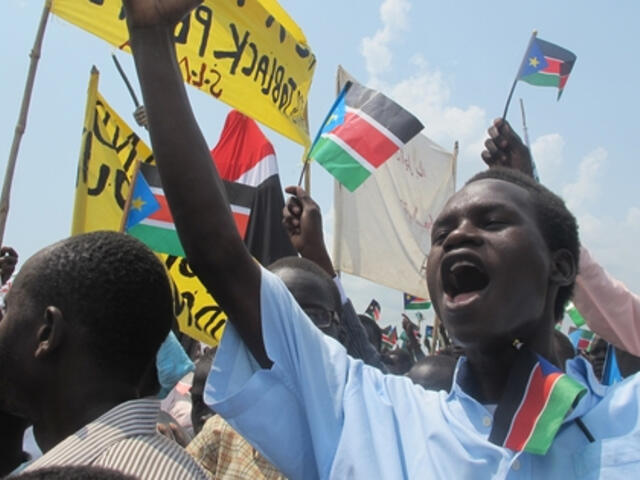 A too brief moment of peace

On July 9, 2011, hundreds of thousands of people broke out into exultant celebration in Juba, the capital of the Republic of South Sudan, cheering and singing as the nation’s new flag was raised for the first time.

“We are free,” they shouted. “We are free!” The event represented a new start after two decades of war and strife between southern Sudan and Sudan’s government in Khartoum in the north. 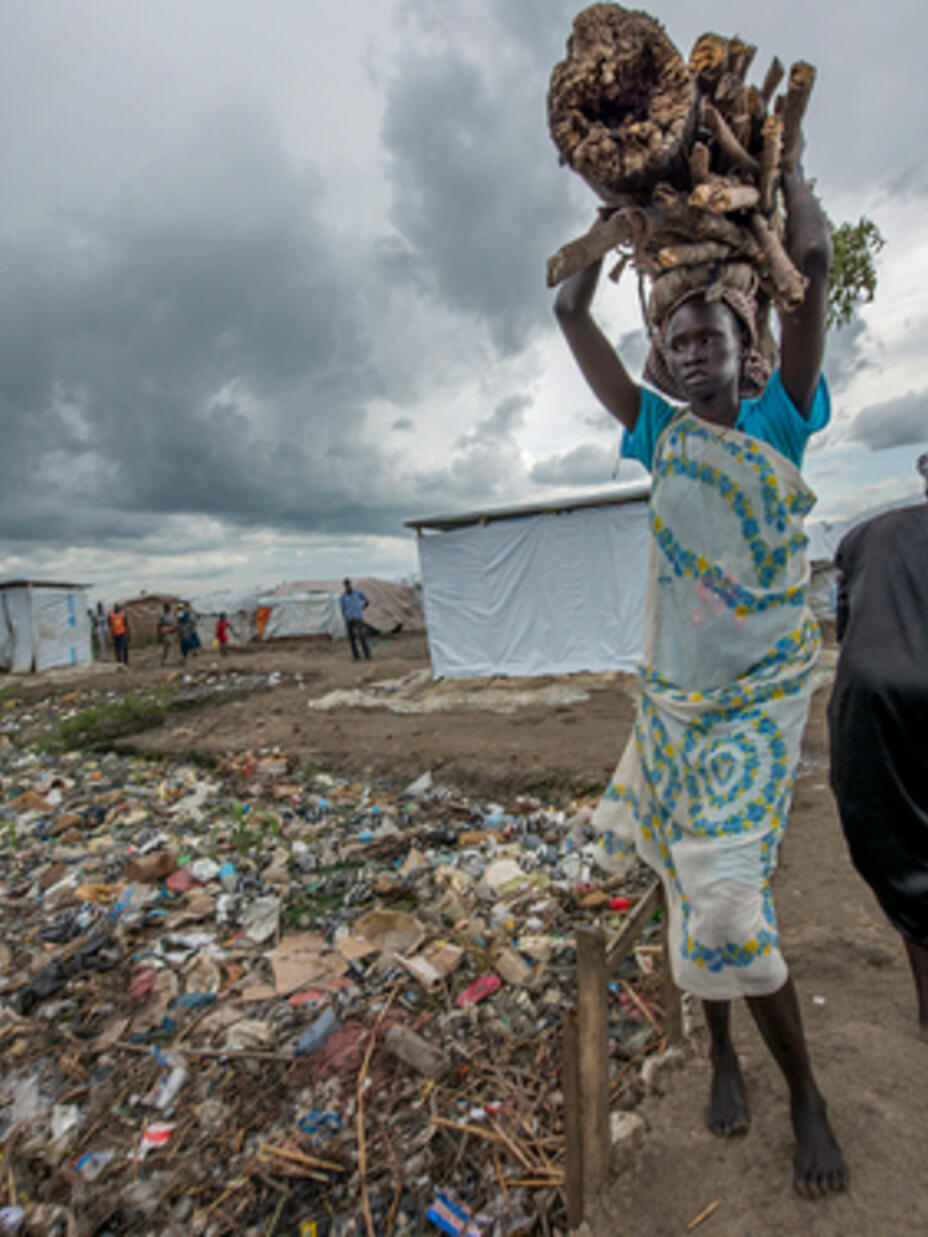 Some 50,000 displaced people live in the overcrowded and unsanitary camp at the United Nations base in Nenyiu, Unity State.
Photo: Peter Biro/IRC

A 2005 peace agreement brought an end to one of Africa’s longest-running wars and led to South Sudan’s independence from Sudan. But in December 2013, South Sudan plunged back into chaos when a political rivalry between president Salva Kiir and former vice president Riek Machar caused an upsurge of violence along ethnic lines, ending three years of relative stability in the world’s youngest country.

Currently, more than 150,000 people are sheltering in six United Nations bases, the most since fighting began 18 months ago. According to U.N. figures, 10,000 people have fled to camps inside the peacekeeping bases in the past week alone. The IRC has set up health clinics in the camps to treat patients suffering from cholera, diarrhoea, malaria and other illnesses.

But the vast majority of displaced South Sudanese live outside U.N. bases and formal camps. Many have relocated to remote areas without protection from new waves of violence that keep them on the move. The constant upheaval makes it difficult for humanitarian agencies to reach those in need of assistance. The recent fighting in Unity and Upper Nile states has uprooted many more people and compounded the challenges of delivering urgently needed aid. 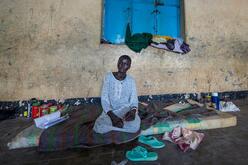 Civilians in the crossfire

Civilians, especially women and children, have borne the greatest burden of the conflict. In April 2014, hundreds of people were murdered when rebels swept through the town of Bentiu in embattled Unity State, overrunning the town’s hospital, church and mosque. The killings prompted a reprisal by rival fighters, who stormed a U.N. base in the town of Bor, killing 58 people, including two IRC aid workers. 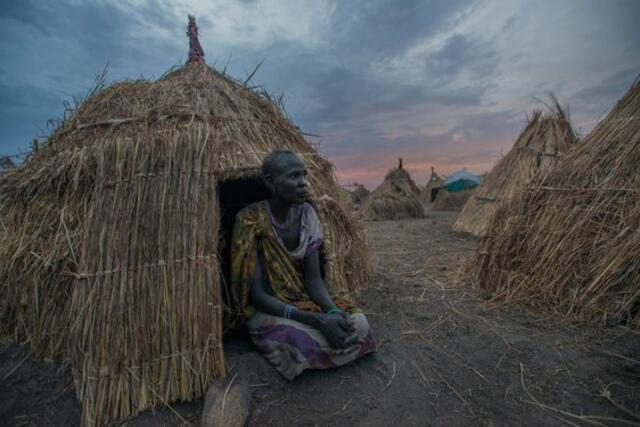 Nyanen Ruot, 65, sits in front of a makeshift shelter in a field near the town of Ganyliel. In December 2013, Ruot fled fierce fighting in Bentiu, the capital of Unity State. “A neighbor was shot dead in front of my own eyes,” she recalled.
Photo: Peter Biro/IRC

Every day, countless women and girls face abuse, from physical and sexual violence to early and forced marriage. One woman described being raped three times on a five-day walk to find food and collect firewood for her family living outside a camp.

The IRC has successfully advocated for the U.N. in South Sudan to accompany women and girls who must forage for food outside of the camps in Bentiu. We also created safe spaces for women and girls where they have access to medical treatment, psychosocial counseling and other support. Over 5,000 girls and women benefit from these centres. 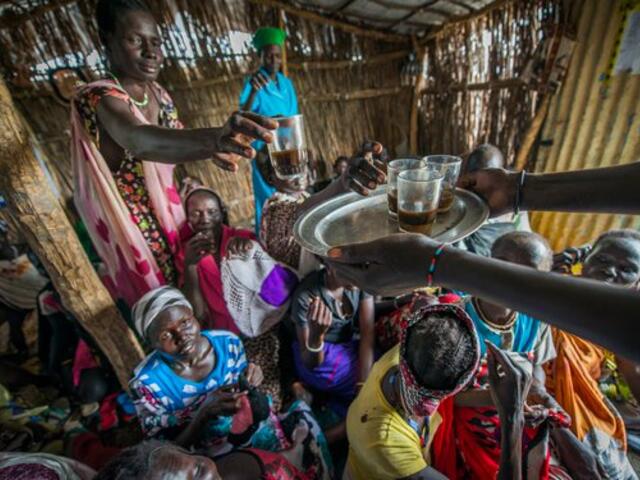 Coffee is served at an IRC-run women’s center in Bentiu camp, where rape and other abuse is common
Photo: Peter Biro/IRC

Some 4.6 million South Sudanese face starvation as fighting has disrupted planting and harvesting and traders are unable to get goods to markets. In fact, South Sudan is suffering from the worst food emergency in the world. And it is increasingly dangerous and expensive for aid groups to reach those in need. 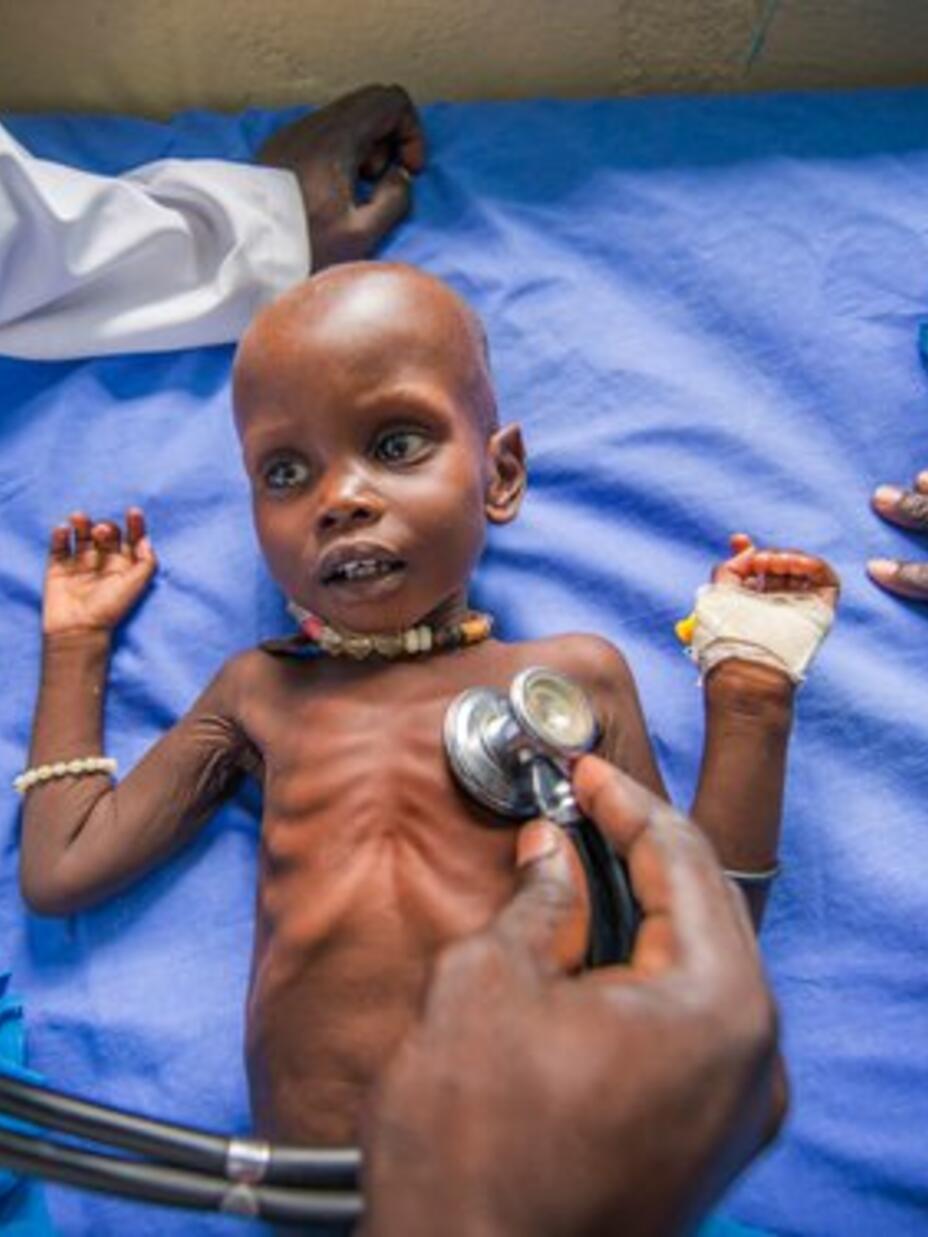 A severely malnourished boy is treated in an IRC feeding center in Ganyliel. Thousands of children could suffer from severe malnutrition as fighting continues to make it difficult for aid agencies to deliver lifesaving assistance.
Photo: Peter Biro/IRC

Since the founding of South Sudan, the IRC has been working in remote areas where markets are now empty and health facilities closed or destroyed. Last year, we launched a humanitarian response in Ganyliel and nearby towns, where residents had resorted to harvesting water lilies to feed their families. The IRC is restoring wells and treating water, and we continue to support health clinics and work to reduce the rate of malnutrition in regions hit hardest by the crisis. 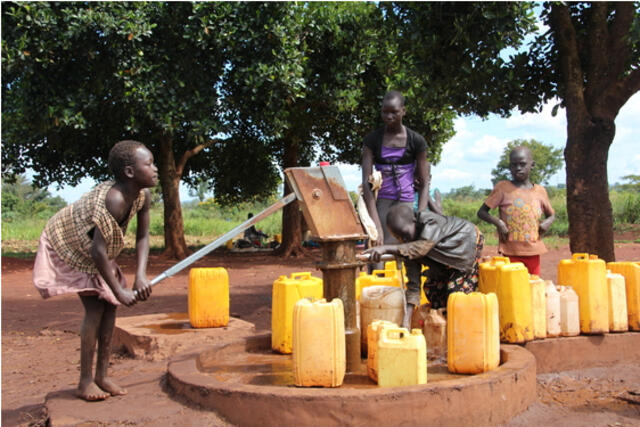 Fleeing across the border

More than 600,000 South Sudanese have fled into Ethiopia, Kenya, Sudan and Uganda, where 30,000 people (80 percent of them women and children) have sought shelter in the Kiryandongo refugee camp. The IRC has been providing emergency water, sanitation and health services to refugees in the camp, and educating people about ways they can prevent outbreaks of disease while living in such crowded conditions. 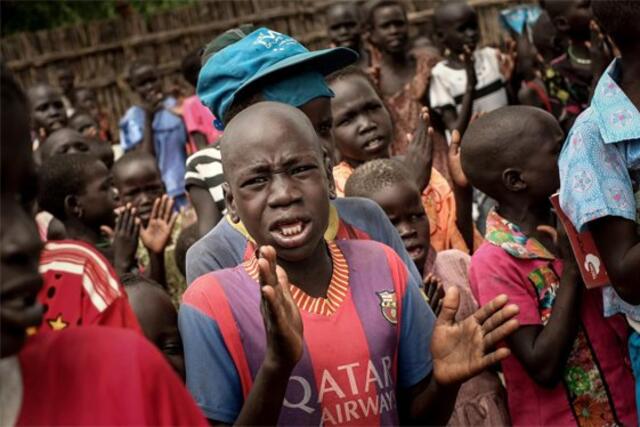 Children join in singing at a "Child Friendly Space" the IRC set up to give them refuge from the war in South Sudan
Photo: Thomas Lay/IRC

Even as humanitarian agencies like the IRC call for more support for civilians caught in the crossfire in South Sudan, we know that aid alone won’t end their suffering and avert mass starvation. As South Sudan enters its fifth year as a nation, its warring leaders must do all they can to stop the fighting and start to build a more stable future for their people.